The Shin Bet has been called in to reinforce Israeli police as they struggle to control the riots in Arab and mixed Jewish-Arab cities. 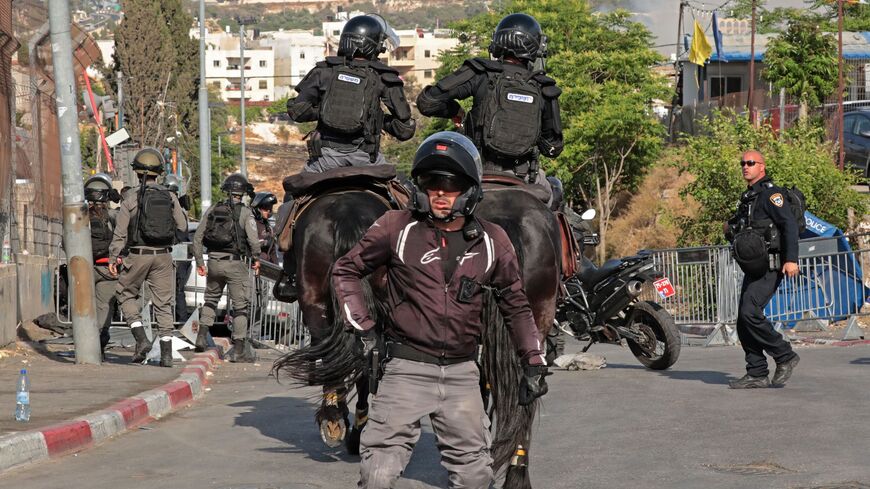 Israeli police officers gather at the scene of a vehicular attack in the Sheikh Jarrah neighborhood of Israeli-annexed east Jerusalem on May 16, 2021. - YOSSI ZAMIR/AFP via Getty Images

The High Follow-up Committee for Arab citizens of Israel is calling for a general strike tomorrow in Arab towns and communities over the conflict at Al-Aqsa Mosque and violence by settlers in mixed cities. Members of the Committee met yesterday with residents of Jaffa and Lod to hear their feelings and concerns.

The meeting came as tensions continue to rise in Jewish-Arab mixed cities for a second week. Last week, clashes and tensions in east Jerusalem during Ramadan, painful photos from the Al-Aqsa Mosque showing Israeli police bursting into the mosque, violent protests across Jerusalem and the ongoing battle over the Sheikh Jarrah neighborhood have created an explosive situation with Hamas firing rockets toward Jerusalem. And while Israel rained airstrikes on Hamas in the Gaza Strip, an internal battle has developed between Arab residents and their Jewish neighbors in mixed cities such as Lod, Jaffa and Ramle.

There have also been several intense clashes in Arab towns and protests against the events in Jerusalem during Ramadan. The incidents included rock throwing, disorderly conduct, arson of a synagogue, attacks on Jewish citizens by Arabs and attacks on Arab citizens by Jews and destruction of private and public property, leaving many wounded. One man was killed in Lod. Mousa Hassouna, 32, was shot to death by a Jew who was arrested.

The chaos led President Reuven Rivlin to demand the Arab leadership speak out against the raging violence. He called its silence “shameful, giving support to terrorism and rioting and encouraging the rupture of the society in which we live and in which we will continue to live once all this has passed.” He also called on the Israeli government “pursue the rioters with a firm hand restore security and order while fighting terrorism from Gaza without compromise.” The president later held a conversation with all of the mayors of Arab and Jewish towns in the Negev to ask them to calm their people and end the violence.

In testimony of the scope of the violence, the Shin Bet made the unusual announcement that in light of the escalation, the agency will act alongside Israeli police inside the cities to stop the violence between Arabs and Jews. As soon as the Shin Bet entered, the situation seemed to change, with a drastic decrease in the clashes and disturbances, whether caused by Jews or Arabs.

Is stopping the clashes too much for the police to handle, just like the fight against violence and crime in the Arab community, which loses more than 100 lives to murder a year? Is the Shin Bet the answer to both challenges?

One of the points of light is that Israel’s leadership seems to have finally realized that the great number of weapons circulating in the Arab community could one day be turned against Jews. Those who have pleaded in the past for the confiscation of illegal weapons are frustrated, saying that the government and law enforcement don't care about the issue as long as the Arabs shoot at Arabs.

Yesterday, head of the Arab Ra’am Party Mansour Abbas visited Lod, calling on both sides to restore calm. During the tour, Abbas first met with the family of Hassouna and then visited the site of the synagogue that was torched by rioters.

The country is also coping now with the ongoing political crisis, made worse by the internal tensions and by the military operation in Gaza. Yamina chair Naftali Bennett has announced that he stopped negotiations with the so-called Change Bloc to form a rotation government with Yesh Atid leader Yair Lapid, who currently holds the mandate to form a government. Bennett has returned to negotiating with the Likud and Prime Minister Benjamin Netanyahu, saying that security precedes civil issues. Bennett was quoted as saying, “Because of the emergency situation in mixed cities, a ‘change government’ as had been planned cannot handle it. We need force, to bring in the military and make arrests. These things can’t be done if we depend on Mansour Abbas.”