Israel was unprepared for the nightmare scenario of simultaneous rioting in the country and massive rocket attacks from Gaza. 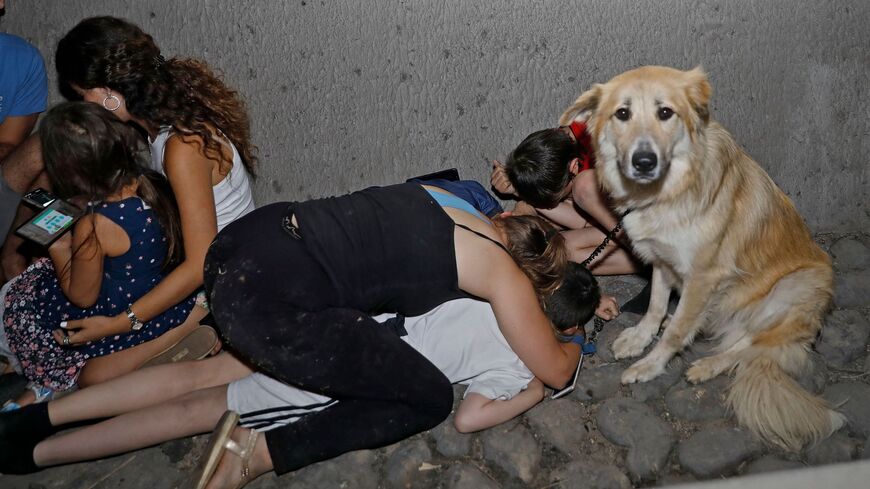 Israelis take cover under a bridge at the entrance of the central city of Tel Aviv, on May 11, 2021, after rockets were launched toward Israel from the Gaza Strip. - GIL COHEN-MAGEN/AFP via Getty Images

These lines are being written under fire. Israel is engaged in a bizarre war that it did not want, sparked by a dispute between Palestinians in Jerusalem’s Sheikh Jarrah neighborhood and the Jews seeking to evict them from their homes. It spread to Al-Aqsa Mosque, where it was fueled by observances of the holy month of Ramadan, sparked an intense clash with Hamas and Gaza and prompted rioting by Arab citizens of Israel. Scenes of Arab gangs prowling the streets of the mixed Arab-Jewish city of Lod and venting their anger on Jewish neighbors evoked comparisons to anti-Jewish pogroms in pre-Nazi Europe. In some Lod neighborhoods, Jewish residents barricaded themselves in their homes, fearing they would be harmed by the groups of Arabs torching cars, synagogues and other facilities.

Police were caught unprepared, even helpless. Border police units were sent in to back up local police forces spread thin throughout the country dealing with rioting in other mixed towns, such as Acre. The transition government of Prime Minister Benjamin Netanyahu was also caught off guard. The nightmare scenario that many Israelis feared was suddenly here.

On the night between Tuesday and Wednesday, May 11 to 12, the organization and its affiliated factions fired hundreds of rockets at Israel. Hamas' capabilities were somewhat reminiscent of Hezbollah’s and clearly made possible by money from Qatar.

The projectiles sent almost half of Israel’s population into shelters, killed five civilians in the Israel’s south and center and wounding scores. Sirens wailed throughout the night, rousing residents of Tel Aviv, the Ben Gurion airport area and the Sharon central region from their beds and sending them fleeing for cover. Another Israeli was killed this morning when an anti-tank missile hit the south of Israel.

Since the beginning of the current conflict, Israel has been striking targets in Gaza, exacting a heavy toll on Hamas. Still, endless photos are giving what the organization considers a victory: all the rockets raining on Jerusalem, Tel Aviv and other Israeli cities.

In the days preceding the violence, the political right was engaged in a love fest with Israel’s Islamist Ra’am party, seeking its support to provide Prime Minister Benjamin Netanyahu with a Knesset majority for a new government. In the campaign leading up to the March elections, Netanyahu courted the Arab vote, touring towns and villages and boasting of the warm welcome and the affectionate moniker “Abu Yair.”

After Netanyahu warmed to the Islamists, his opponents followed suit. The progression seemed somewhat natural as the shared threat of the COVID-19 pandemic brought Jews and Arabs closer, with Jews expressing gratitude to the Arab nurses and doctors who treated them and saved their lives. But this week, the warm and fuzzy togetherness went up in flames.

The Jerusalem flashpoint of Al-Aqsa, one of Islam’s holiest sites, was the game-changer. The clashes there started out as a real estate dispute in nearby Sheikh Jarrah, fanned by one of the far-right’s greatest provocateurs, recently elected Knesset member Itamar Ben-Gvir. Ben Gvir came to Sheikh Jarrah to encourage Jewish settlers claiming ownership over lands where Palestinian families have been living for decades. Tensions in Jerusalem were already high since the beginning of the month of Ramadan, especially near the Damascus Gate, at the entrance to the Old City, where police installed barriers. Angry Muslim worshipers rallied at the Temple Mount Compound. From there, things spiraled quickly.

The skirmishes intensified on May 10 as Israelis were celebrating Jerusalem Day, marking the unification of the city after the 1967 Six Day War. Social media was awash with photos of flag-carrying Israeli dancing and singing at the Western Wall, Judaism’s holiest site, while flames rose from the Muslim prayer plaza above. The two events were not linked, but images shared on social media made the tableau a keg of dynamite.

One photo was worth a thousand rockets and the opening shot of the riots that broke out in mixed Arab-Jewish towns and prompted Hamas to issue an ultimatum demanding that Israeli forces be withdrawn from the Jerusalem flashpoints by 6pm. Israel obviously ignored the deadline and Hamas fired six rockets at Jerusalem. Both sides lost control and the situation quickly deteriorated.

The escalation is ongoing. Israel cannot afford to stop bombing Gaza until it brings Hamas to its knees. Meanwhile, its civilians are paying the price. The only one benefitting from the emergency is Netanyahu.

Israel is not under existential threat. It is a mighty military power being challenged by small Islamist groups making life miserable. But recent scenes suggest for the first time there could be an uprising within the country. Israel must now hear the national wakeup call when a central town such as Lod, a stone’s throw from Israel’s main airport, is placed under curfew and some of its Jewish residents are forced to flee their homes in fear for their lives.

The IDF and Israel’s vaunted military intelligence were caught by surprise, failing to realize that Hamas was ready to do battle and willing to fire at Jerusalem. They were guided by recurring assessments that Hamas’s Gaza leader Yahya Sinwar was focused on negotiating a long-term cease-fire with Israel and rebuilding Gaza. No one seemed to remember Mohammed Deif, the almost mythological Hamas military leader who has been in hiding for years.

Netanyahu is clutching his partner/bitter rival Defense Minister Benny Gantz in a desperate bid to create a semblance of unity and hoping that the change bloc working to replace him disintegrates under the force of the clash with Gaza and its repercussions. Netanyahu, who offered Islamist Knesset member Mansour Abbas his seal of approval just weeks ago, is now reverting to his usual delegitimization campaign against Israel’s Arab citizens, who are no longer of use to him.

But the real remedy for the clash between Arabs and Jews in Israel is surely Arab participation in the country’s governance and decision-making process. Ultimately, the two peoples are stuck together, and this reality is not about to change. Only the people themselves can mend things, and they must choose between coexistence and partnership or war.