Riots in Lod, Ramle and other mixed Jewish and Arab cities, coupled with Israeli retaliation against the barrage of rockets from Gaza, are making an Arab-backed government coalition look increasing unfeasible. 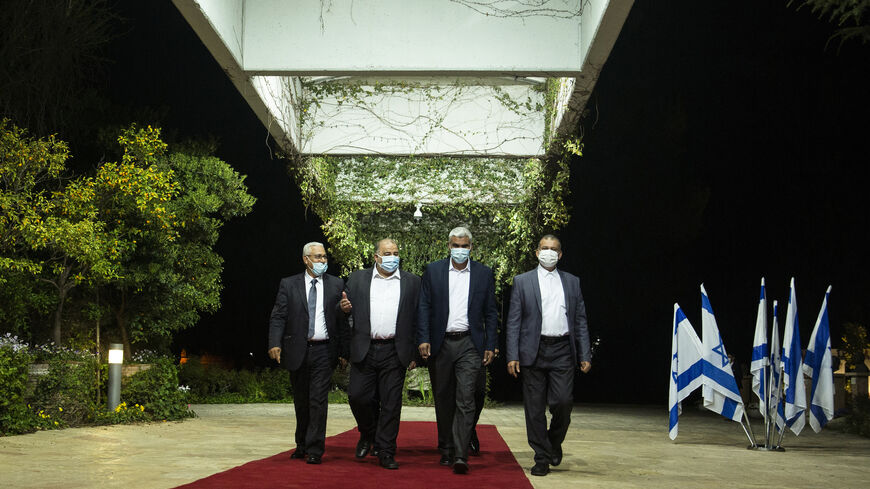 Ra'am leader Mansour Abbas and other party members attend a meeting with President Reuven Rivlin at the president's residence on April 5, 2021, in Jerusalem. - Amir Levy/Getty Images

“We just suffered a devastating blow," a senior official involved in the negotiations to form Israel's next government told Al-Monitor this morning on condition of anonymity. "It is doubtful now that we will be able to form the government that we wanted. The overwhelming feeling is that everything just got a lot more complicated.” The pessimistic assessment comes in the wake of one of the most impactful nights in the history of Arab-Jewish relations in the State of Israel.

Since early yesterday morning, Gaza militants have been firing hundreds of rockets at Israeli southern communities. By evening, the projectiles' range encompassed Tel Aviv and its neighboring cities. The rocket attacks lasted throughout the night and millions of Israelis were forced into shelters.

By morning there were six dead and dozens more wounded, and the attack showed no signs of relenting. Under Prime Minister Benjamin Netanyahu’s leadership, Israel has been dragged into another Gaza campaign while the country is at a political weak point. The violence could last for days.

Amid clashes with Hamas, the situation in the country’s mixed Arab and Jewish towns was spinning out of control.

The riots caught the police by surprise. Matters got so bad that the government took the unprecedented step of declaring a state of emergency in Lod. Entire border police companies were sent to restore order.

It was the first time that anything like this has happened in Israel. Decades of coexistence have suffered a mortal blow and it is impossible to say how long it will take to repair the damage.

These developments have direct implications for the efforts to form a new government that were gathering momentum since last weekend. Until now, it seemed likely that Netanyahu would be out of office within a week, but the political combinations and alliances needed for assembling the new government were shaky.

Yamina chair Naftali Bennett, who once opposed any collaboration with the Arab parties, was suddenly willing to accept their support if it meant that he would become prime minister, even with only six seats in the Knesset. Many of Bennett’s voters were furious. He had promised before the election that he would not help form a new government that included leftist parties. Now, the government he has proposed relies not only on the left but on an Arab party. Bennett’s voters felt cheated.

Yesterday, Bennett arrived in Ashkelon to view the site where a Hamas rocket landed. He seemed shocked by the jeers that greeted him. He refused to answer whether he still planned to form a government with Ra’am despite the recent events. In the background, public criticism rose of the Arab Knesset members who had not condemned the riots or taken any other steps to douse the flames as Israeli cities burned.

In the morning, however, the parties seemed no less determined to form a new government, perhaps even more committed. The first to respond to questions about the talks was Ra’am head Mansour Abbas. “We have no choice but to return to the table once the flames have subsided so that we can negotiate the formation of a new government. We have a real chance to play an important role in Israeli politics for the benefit of our sector,” he said in a radio interview.

According to sources in the change bloc, Abbas made his remarks at Bennett's behest to give him the space he needed to form a new government with Yesh Atid chair Yair Lapid. Once Abbas called for calm, Bennett wrote on Facebook, “After a very difficult night of massive rocket fire from Gaza and Arab riots against defenseless Jews in the country’s mixed cities, I call on the government not to end the current round of fighting in Gaza before Hamas pays a steep price for what happened,” wrote Bennett. He then went on to attack the Likud, blaming Netanyahu for the current situation: “The Likud has gone from being a governing party into being a party that has failed to manage the country, and is leading with gross negligence from fiasco to disaster.”

Lapid, who holds the mandate to form a new government, tweeted soon after, “I spoke this afternoon with President Reuven Rivlin on the security and political situations. I told the president that despite the security situation, efforts will continue for the formation of a government. … We all need to take a deep breath and help calm the children terrified by the sounds of explosions right above their homes, but at the same time, we must carry on with our efforts to form a unity government."

It looks like the parties are still coordinating with Abbas, but they must realize that whatever happens over the next few days will determine the fate of these efforts. The longer Hamas continues firing rockets on Israeli cities and the military campaign now known as Operation Guardian of the Walls continues, the greater reservations Arab-Israelis and Jews alike will have about such a government. The situation in Israel’s mixed cities over the coming days will also have a major impact, and the riots seem likely to resume tonight.

Both the change movement and Netanyahu’s efforts to coax Ra’am into helping him were made possible by a relatively calm period during the coronavirus pandemic. But in the upheaval, both have ground to a halt.

Lod Mayor Yair Revivo, of the Likud, gave painful voice to this rude awakening in a series of interviews with the media. He said that he encouraged Netanyahu to form a government supported by Ra’am and noted that in his own city council, there is healthy cooperation with the Islamic Movement. But Revivo expressed shock that synagogues in his town were torched and changed his tone, saying this "intifada of Arab-Israelis" is due to a “failure of governance" and "Civil war has erupted in Lod." He said, "I told Netanyahu to bring Ra’am into his government, but right now the Islamic Movement is behind the incitement in the city.”