The central city of Lod is under a state of emergency, and residents are banned from leaving their homes Wednesday night. 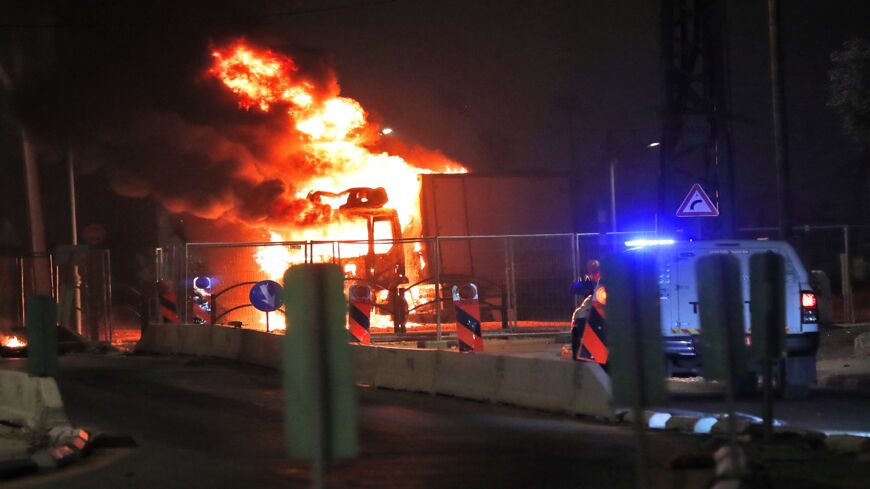 A truck burns at the entrance of the mixed Jewish-Arab city of Lod, where a state of emergency has been declared following civil unrest, on May 12, 2021. Israeli Prime Minister Benjamin Netanyahu declared a state of emergency in Lod, where police said "wide-scale riots erupted among some of the Arab residents," and authorities later imposed an overnight curfew there. - AHMAD GHARABLI/AFP via Getty Images

Police in Israel are placing the central city of Lod under curfew following two nights of deadly clashes between Jewish and Arab residents.

From 8 p.m. on Wednesday until 4 a.m. Thursday morning, people in Lod are banned from leaving their homes and non-residents cannot enter the city. Exceptions to the curfew will be made for residents in need of medical attention or seeking shelter from rockets.

Lod, a city near Tel Aviv, has a mixed Jewish and Arab population. Musa Hasuna, a 25-year-old Arab resident, was reportedly shot and killed in Lod on Tuesday while protesting in solidarity with the Palestinians of East Jerusalem and Gaza. Army Radio reports a 34-year-old resident was arrested in connection with the shooting.

The city’s mayor, Yair Revivo, said “civil war” had erupted, warning “the day after, we still have to live here together.” Israeli President Reuven Rivlin also condemned the violent scenes.

"The sight of the pogrom in Lod and the disturbances across the country by an incited and bloodthirsty Arab mob, injuring people, damaging property and even attacking sacred Jewish spaces is unforgivable," Rivlin said on Wednesday.

"Protests in Arab society are moving in a very dangerous direction, as popular protests have escalated into violence," he said, according to Israeli newspaper Haaretz. "I call on everyone to behave responsibly and to adhere to the rule of law."

Across Israel, 270 people were arrested on Tuesday following what an Israeli police spokesman described as “wide-scale disturbances and riots.”

The violent protests come as Hamas, which rules the Gaza Strip, and the Palestinian Islamic Jihad group continued firing rockets into Israel, triggering retaliatory airstrikes from the Israeli army. The aerial bombardments have killed at least 65 people, including 14 children, in Gaza and six people in Israel, according to Palestinian and Israeli officials.

Rocket fire from Gaza on Wednesday killed two Arab residents in Lod — a father and his 16-year-old daughter. The mother was also seriously injured.