Far-right militants are reportedly planning more violence in several Israeli cities that have already been rocked by racially motivated clashes. 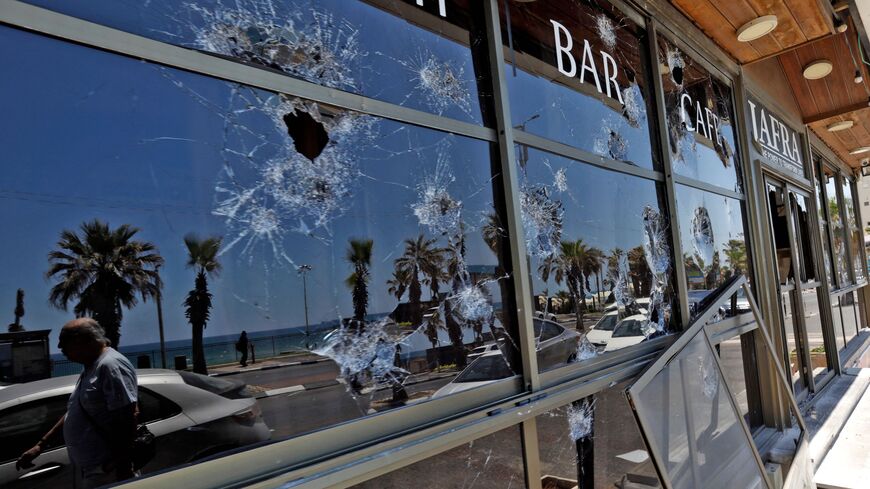 A picture shows a restaurant that was attacked the previous night in Israel's Mediterranean city of Bat Yam on May 13, 2021. - GIL COHEN-MAGEN/AFP via Getty Images

Three minors were arrested this afternoon in the northern town of Afula carrying an electric shocker, pepper spray and a bat. They had apparently gathered there after a social media post called for a violent demonstration against Arabs.

A 19-year-old soldier was attacked this evening by Arab men and is hospitalized in serious condition. In the Tel Aviv neighborhood of Hatikvah, far-right activists clashed with local Arab residents. Reports say the activists went there following a call on social networks to demonstrate against Arabs in the neighborhood. The activists apparently also attacked a journalist who was photographing the gathering.

Police are preparing for more hate incidents tonight. Defense Minister Benny Gantz ordered a major call-up of border police reservists to reinforce officers working to contain the unrest. “We are in a time of emergency. At this time a massive response by forces on the ground is needed,” said Gantz. Still, the minister stressed that no IDF soldiers would be involved in police activities.

Last night was evidently one of Israel's worst ever for Jewish-Arab relations, with several hate incidents in towns across the country. Riots erupted yesterday evening in Haifa, Tiberias, Jaffa, Lod, Acre and Bat Yam. In Acre, a Jewish man was beaten with sticks and rocks by a group of Arab men, leaving him in serious condition. In Bat Yam, a group of Jewish nationalists staged a massive riot, shouting, "Death to Arabs" and smashing the windows of Arab-owned shops. An Arab man was attacked by the mob with batons.

Police declared a curfew last night in the town of Lod, which had become an epicenter of Jewish-Arab clashes. Residents were forbidden from leaving their houses, lingering in public spaces or entering the city. The curfew continues this evening as well, with hundreds of border police officers deployed across the city.

Central District Police Commander Moshe Barkat met this afternoon with leaders of the Arab community in Lod to discuss ways to calm tensions and prevent confrontations tonight. All parties agreed to work together and tour the town to demonstrate their commitment to end the crisis and restore calm to the city.

Senior police officers reportedly met today with leaders of the Bedouin community in the south of Israel after minors threw rocks on passing cars near the Jewish town of Dimona. Community leaders committed to preventing from such incidents.

About a hundred Jews and Arabs demonstrated together this afternoon at the Nahalal junction in the northern Jezreel Valley, calling for calm and coexistence. In Haifa, Meretz leader Nitzan Horwitz participated at a rally in support of Jewish-Arab coexistence.