The week has been violent in Jerusalem with both Israeli Jews and Arabs reportedly attacking each other in well documented incidents. 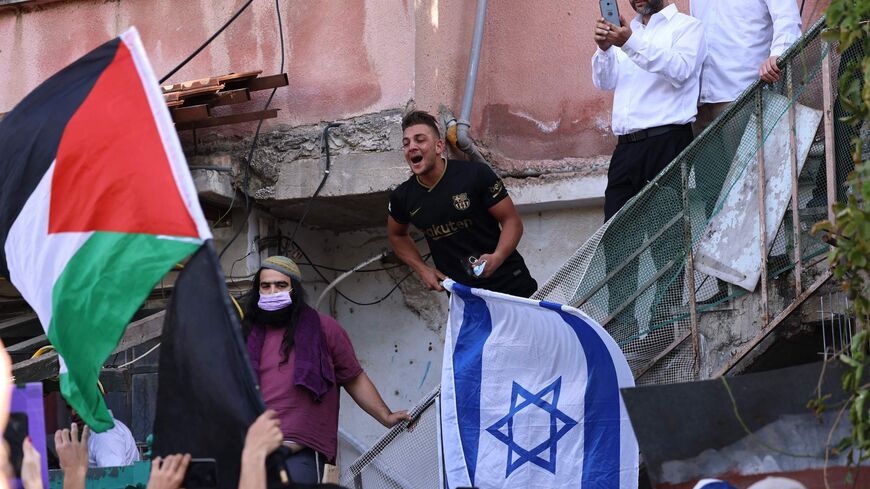 Israeli settlers in the Palestinian neighborhood of Sheikh Jarrah react as Palestinian and Israeli activists chant slogans in front of their house during a demonstration against the expulsion of Palestinian families from their homes in Israeli-annexed east Jerusalem on April 16, 2021. - EMMANUEL DUNAND/AFP via Getty Images

Several violent incidents between Jews and Arabs have rocked Jaffa and Jerusalem over the past week.

Seven brawls between Jews and Arabs were reported yesterday, April 20, on Jerusalem's central Jaffa Street, near the Nablus Gate in east Jerusalem and in the Jewish Kiryat Yovel neighborhood. In another incident, a video recorded yesterday showed several Israeli Jews, some of them ultra-Orthodox, surrounding and cursing two Arabs in a car in the center of the city. At some point, one of the Arabs was sprayed with pepper spray while passers-by chanted, "death to the Arabs."

Also yesterday, a 17-year-old Palestinian from east Jerusalem was arrested on suspicion of attacking two ultra-Orthodox boys on the Jerusalem light rail last week. A video of the incident posted on social media showed a man knocking the glasses off one of the teenagers and slapping the other in an apparently unprovoked assault.

Clashes have erupted in Jerusalem with the beginning of Ramadan last week, mostly in the environs of two entrances to the Old City of Jerusalem, the Damascus Gate and Herod’s Gate. Clashes reportedly broke out when police officers stopped dozens of young Muslims from sitting on the ancient steps at the entrance to Damascus Gate. Other incidents were reported in the evening, after Iftar dinners, when young Muslims on their way to the Temple Mount compound threw stones and shot fireworks at police officers.

Jerusalem police report having detained more than 50 people suspected of rioting. Police Commissioner Kobbi Shabtai arrived yesterday to east Jerusalem as the situation escalated. Police fear further escalation as members of the extreme right call for supporters to come to Jerusalem and confront local Arab residents. The nationalist group Lehava is planning a march in Jerusalem on April 22. Israeli press reports revealed exchanges between Lehava activists ahead of tomorrow’s march, with some of them saying they intend to bring bats and attack Arabs.

Tension has also risen in the mixed Jewish-Arab city of Jaffa. Three Arab-Israelis were detained by police April 18 after clashing with Jewish protesters. Riots broke out after a violent assault on yeshiva head Rabbi Eliyahu Mali earlier in the day in an apparent hate crime.

President Reuven Rivlin addressed the violence during a visit yesterday to the Arab city of Sakhnin, warning that such attacks are becoming routine. "We must not allow violence become a legitimate language," he said, adding, "We must fight violence with education, with advocacy, with unequivocal public condemnation, and at the same time strict enforcement, which will keep the violent and criminal elements away."