The foreign ministers of Egypt and Qatar met in Cairo for the first time since 2017 to discuss implementation of a reconciliation agreement amid a wider Gulf conflict. 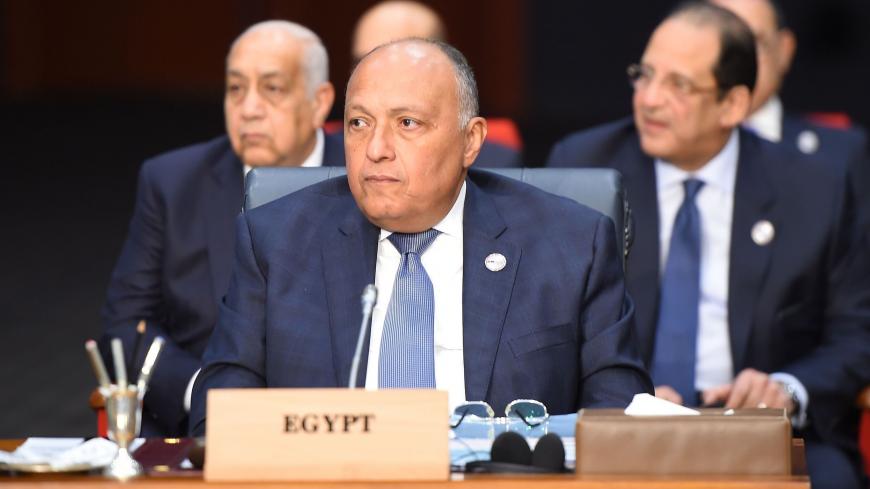 Qatar’s Foreign Minister Sheikh Mohammed bin Abdulrahman Al-Thani recently said that his country and Egypt are working toward rapprochement two months after the signing of a reconciliation agreement between the two sides.

In the first meeting since the two countries restored diplomatic relations as part of a reconciliation agreement that officially ended more than three years of Gulf division, Al-Thani met with his Egyptian counterpart Sameh Shoukry in Cairo March 3 on the sidelines of an Arab League meeting.

In 2017, Saudi Arabia, Egypt, the United Arab Emirates and Bahrain severed relations with Qatar and imposed a diplomatic, trade and travel blockade against Doha over its alleged support for terrorism. Qatar has repeatedly denied their accusations.

“We in Qatar and our brothers in Egypt are looking at matters in a positive light and are striving to restore warm relations,” the Qatari minister said during a March 3 press conference in Cairo at the conclusion of the Arab League meeting held under the chairmanship of Qatar.

Al-Thani said that his meeting with Shoukry was marked by a “spirit of positivity and optimism.”

On Jan. 5, Saudi Arabia, the UAE, Egypt and Bahrain signed the Al-Ula Declaration at a GCC summit in Saudi Arabia to end the dispute with Qatar and restore diplomatic relations.

The Egyptian Foreign Ministry said that reconciliation will promote solidarity between the countries of the Arab Quartet and strengthen joint Arab action to confront regional challenges. In a Jan. 5 statement, the Foreign Ministry stressed the need to rebuild relations based on good will and avoid interference in the internal affairs of other countries.

Kuwait and the United States, which have close relations with all concerned countries, have led the mediation efforts to end the Gulf dispute, which Washington says is impeding attempts to contain Iran.

Tension started to build between Egypt and Qatar with the 2013 military ouster of late President Mohammed Morsi, a leader of the Muslim Brotherhood. The group was subsequently classified in Egypt as a terrorist organization. Although Qatar has denied having ties to the Muslim Brotherhood, Doha continues to host Egyptian Brotherhood members who are wanted in Cairo on terrorism charges.

Rakha Hassan, a member of the Egyptian Council for Foreign Affairs, told Al-Monitor that Egypt and Qatar are moving toward improving relations in an effort to defuse the tension between the two sides.

On Jan. 20, Egypt announced an agreement with Qatar to officially resume diplomatic relations. The Egyptian Embassy in Doha resumed its work, but diplomatic representation remains limited to the charge d’affaires level.

Hassan speculated the Egyptian and Qatari foreign ministers may have discussed increasing diplomatic representation with the imminent return of ambassadors to the two countries.

“There are common interests between the two countries that are greater than differences. We hope that the coming period will witness positive developments,” he added.

Kristian Ulrichsen, a fellow for the Middle East at the Baker Institute for Public Policy at Rice University in Houston, told Al-Monitor, “I do expect that relations between Qatar and Egypt will normalize as a result of the reconciliation agreement reached at Al-Ula.”

Ulrichsen added, “It is likely that the joint committees that have been established will facilitate both sides to identify confidence-building measures that will underpin the full restoration of ties, and we have already seen a resumption of investment ventures, which in any case were never fully dissolved, unlike in Bahrain, the UAE and Saudi Arabia."

On Jan. 9, the Qatari Diar company obtained the Egyptian government’s approval to complete the City Gate project in New Cairo. Egypt also allowed Qatari Finance Minister Ali Shareef Al-Emadi to participate in the inauguration of the St. Regis Hotel owned by Qatari Diar on the day of the signature of Al-Ula Declaration.

On Feb. 23, delegations from Egypt and Qatar held their first meeting in Kuwait to discuss ways to rebuild relations between the two countries. The Egyptian Foreign Ministry said that the two sides discussed the necessary measures to enhance joint work and bilateral relations between the two countries to achieve the aspirations of their peoples in terms of security, stability and development.

Following his meeting with Shoukry on March 3, the Qatari foreign minister said that the meeting in Kuwait was positive and that progress is being made toward restoring ties.

Moataz Salameh, head of the Arab and Regional Studies Department at Al-Ahram Center for Political and Strategic Studies, told Al-Monitor that reconciliation between the two countries has come a long way. “Reconciliation has received a strong push from the meeting held between the two countries’ delegations in Kuwait, and later between Shoukry and [Al-Thani] in Cairo,” he said. “I think political reconciliation is on the right track, and there are practical measures that both sides have taken toward each other.”

Salameh added, “But at the media level, there will still be a threat to this reconciliation because [changing attitudes in] the media and putting an end to the mutual media attacks will take time. We are in a period of testing of intentions.”

In televised statements on Feb. 12, Shoukry said that his country monitors and documents on a daily basis all content broadcast in Qatar. He added that committees have been formed in both counties to monitor implementation of their pledges.

Salameh said, “Reconciliation for Egypt means putting an end to the media campaigns by Al Jazeera and other state-owned media outlets to incite against the Egyptian regime. It also means refraining from harboring Egyptian opposition political activists carrying extremist Islamic ideas and handing over wanted individuals. I think these are issues that are being discussed quietly and might require some months."