Egypt awaits Qatar to take actions on the ground in accordance with Al-Ula Declaration that ended the boycott of Doha, but amid concerns that Qatar will bail out on its commitments. 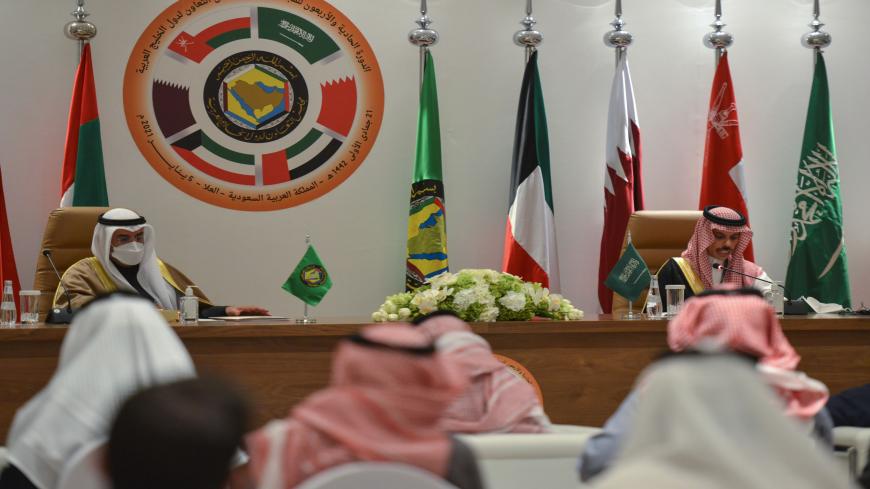 CAIRO — Bahrain’s Foreign Minister Abdullatif bin Rashid Al Zayani has recently lashed out at Qatar for not adhering to Al-Ula Declaration, named after the Saudi city where Saudi Arabia, the United Arab Emirates (UAE), Bahrain and Egypt agreed to ease the boycott imposed on Doha since 2017.

In a statement during a virtual intergovernmental parliamentary meeting on Feb. 1, Zayani accused Qatar of ignoring the provisions stated in Al-Ula Declaration, thus preventing the start of a new phase of regional stability.

During the same meeting, the head of the Foreign Affairs, Defense and National Security Committee in the Bahraini parliament, Mohammed al-Buainain, stressed that Bahrain is still showing “goodwill and is committed to the provisions of Al-Ula Declaration concluded in the Kingdom of Saudi Arabia as a step to addressing pending issues with Qatar.”

He noted, however, that Qatar has yet to show seriousness in implementing its obligations.

On the day of the signature of Al-Ula Declaration, on Jan. 5, the Egyptian Ministry of Foreign Affairs issued a statement saying that the declaration aims to resolve the crisis with Qatar and comes as part of Egypt’s efforts to promote solidarity among the Arab Quartet. “It is imperative to build on this important step to promote the path of Arab action and to support ties among sisterly Arab countries, stemming from relations based on goodwill and noninterference in the internal affairs of Arab countries,” the statement continued.

Qatari Foreign Affairs Minister Mohammed bin Abdulrahman Al Thani asserted Jan. 7 that there were no Egyptian preconditions for the declaration. He confirmed the agreement was reached based on the principles of the reconciliation with the boycotting countries, noting that bilateral rifts with Egypt will be resolved in correspondences between the two countries.

On Jan. 12, the Egyptian authorities announced the reopening of its airspace to Qatari flights.

Yet Bahraini officials believe Qatar has not shown any seriousness in implementing the main demands of the Arab Quartet in exchange for lifting the blockade, mainly noninterference in the affairs of Arab countries, the end of its support to the Muslim Brotherhood and the end of Qatari media incitement against these countries — Egypt, Saudi Arabia, the UAE and Bahrain.

Meanwhile, Egypt shares the concerns of Bahrain over Qatar’s commitment to the declaration, although it did not make any official statement on the issue.

An Egyptian diplomatic source at the Foreign Affairs Ministry who preferred anonymity told Al-Monitor via phone that Egypt’s objective behind the reconciliation with Qatar mainly consists of ending the rift among Arabs. The source said, “It also aims to test Qatar’s intentions and the measures it will take on the ground to change its policy toward Egypt, which was the subject of the dispute and the reason behind the yearlong estrangement between the two countries.”

The source indicated that Egypt has undisclosed reservations on Qatar’s adherence to Al-Ula Declaration. Egypt will wait and assess the Qatari commitment in the coming months, he noted, adding that all Qatar has to do now is prove goodwill and fulfill its commitments.

The source believes Egypt’s signature of Al-Ula Declaration is a good opportunity to test Qatar’s will to change its hostile position against the Egyptian state over the past years.

Tarek Fahmy, a professor of political science at Cairo University, told Al-Monitor, “Egypt has shown a lot of good intentions in signing Al-Ula Declaration. But three years of complete estrangement with Qatar will not be easy to overcome by the mere signature of this initial agreement. There are several points that must guarantee Qatar's commitment to several obligations after the agreement, but they have not been announced yet.”

Fahmy indicated that coordination is ongoing between Egypt and Qatar on the diplomatic and security levels. Several coordination meetings will take place during the coming weeks between Egyptian and Qatari officials to follow up on the implementation of the provisions of the declaration, and to monitor the extent of Qatar's commitment to the general conditions agreed upon, he added. Yet no date has been announced for these meetings.

Fahmy said Egypt believes that the reconciliation agreement is good in general, but it is only a step in the right direction that depends on the Qatari side’s commitment not to interfere in its internal affairs. “Egypt agreed to sign Al-Ula Declaration, provided that coordination continues with Qatar to assess the extent of its commitment not to interfere in Egyptian affairs,” he added.

Ayman Samir, an expert in international relations at Al-Ahram Center for Political and Strategic Studies, explained that Egypt already has set its conditions for reconciliation with Qatar. “Qatar must stop supporting the Muslim Brotherhood and the remnants of terrorist groups in the northern Sinai Peninsula. It must also end its support to Turkey's [actions] in Libya as well,” he told Al-Monitor.

Samir pointed out that Egypt is keeping a close eye on Qatar, waiting for it to fulfill its pledges. Egypt has shown good faith since the beginning of the agreement, he said. “It allowed Qatar to resume investment and economic projects in Egypt. On Jan. 9, the Qatari Diar company obtained the Egyptian government’s approval to complete the City Gate project in New Cairo. Egypt also allowed Qatari Finance Minister Ali Shareef Al Emadi, on the day of the signature of the declaration, to participate in the inauguration of the St. Regis Hotel launched by Qatari Diar," he noted.

Yet, according to Samir, there is still no evidence that Qatar has significantly changed its policy toward Egypt, except for slight changes in the policy of Al Jazeera channel toward the political situation in Egypt. “The success of reconciliation with Qatar depends on the latter’s actions over the coming period. It depends on Qatar refraining in the coming months from interfering in Egyptian affairs. The signature of the agreement will remain mere ink on paper if no action is taken on the ground,” he concluded.