Egypt signed a reconciliation agreement with Qatar, along with Saudi Arabia, the United Arab Emirates and Bahrain, aimed at ending the Gulf blockade imposed on Doha since 2017, but it seems pending issues remain, including the Muslim Brotherhood, preventing full restoration of ties between Cairo and Doha. 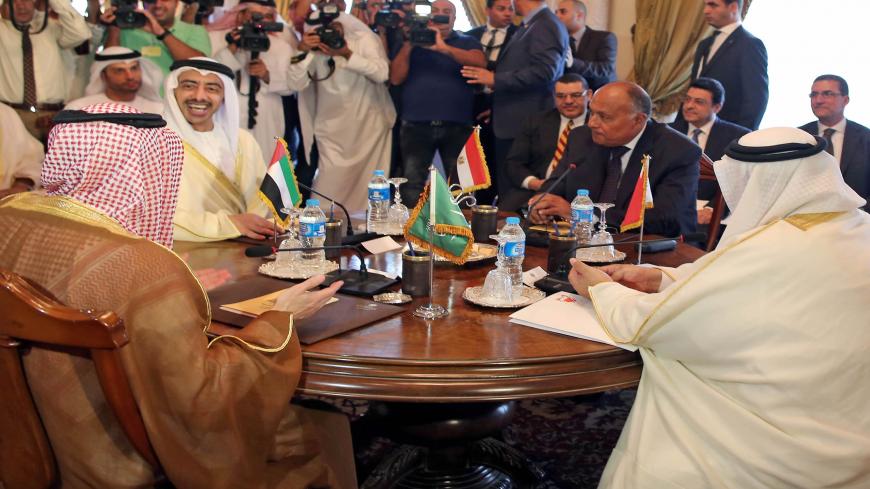 The Foreign Ministry said in a statement published on its Facebook page that Egypt “is keen on [maintaining] solidarity among the Arab Quartet countries and their efforts to close ranks and remove any disagreements among brotherly Arab nations.”

The ministry called for “building on this step to strengthen the Arab action and support relations between the brotherly Arab countries, based on goodwill and noninterference in the internal affairs of other countries.”

Egypt, Saudi Arabia, the United Arab Emirates (UAE) and Bahrain severed diplomatic and trade relations with Qatar in 2017, accusing Doha of supporting terrorist groups. Qatar has denied the accusation, saying the Saudi-led blockade aims to infringe on its sovereignty.

The four countries had produced 13 conditions for Qatar as a price for lifting their blockade, including ending support to the Islamist movement of the Muslim Brotherhood, closing Al Jazeera television, removing a Turkish garrison from Qatar and scaling down cooperation with Iran.

The content of the reconciliation accord between Qatar and the blockading nations was not disclosed, but Saudi Foreign Minister Faisal bin Farhan Al Saud said Riyadh and its three allies agreed to restore full relations with Doha, including the resumption of flights. On Jan. 4, Saudi Arabia reopened its airspace and land and sea borders to Qatar.

“Today is a complete erasing of all disagreements and a full restoration of diplomatic ties. It will hopefully be a strong pillar for the future and stability of the region,” Farhan told a press conference following the GCC summit.

The top Saudi diplomat said the final communique of the summit also called for bolstering cooperation in combating terrorist groups and respecting the principles of good neighborliness.

It remains unclear what concessions Qatar made to encourage Egypt and its allies to end their blockade. The summit communique gave no details, only speaking about a general pledge of solidarity.

The Qatari Foreign Ministry said the communique “strengthens the bonds of friendship and brotherhood between people, anchoring the principles of good neighborliness and mutual respect.”

Egypt accuses Qatar of interfering in its internal affairs by supporting the Muslim Brotherhood, which Cairo listed as a terrorist organization in 2013. Hundreds of Brotherhood members have fled to Qatar in the wake of the ouster of Brotherhood President Mohammed Morsi.

Cairo also denounces Doha for using its media machine to criticize the Egyptian policies and undermine the country’s regional and international standing.

Pro-government journalist Mustafa Bakri accused Qatar of harboring the Muslim Brotherhood and paying millions of dollars to tarnish the image of the Egyptian regime and army. “Reconciliation with Qatar paves the way for it to carry out more conspiracies against all of us,” Bakri tweeted Jan. 4.

In December, Egyptian state-run media decried Qatar for raising its funding for foreign think tanks to launch hostile media campaigns against Egypt. Several newspapers, citing sources, said Doha has increased funding for the Carnegie Endowment for International Peace to write negative reports about the situation in Egypt and the Egyptian economy.

Commenting on reports of a breakthrough in Kuwait-led efforts to heal the rift between the Quartet nations and Qatar, Ahmed Hafez, spokesman for Egypt’s Foreign Ministry, underlined Dec. 31 the importance of “sincere intentions” to achieve true reconciliation.

“[This reconciliation] should be based on the principle of noninterference in internal affairs, combating any threat to security and stability of the Arab countries and peoples and maintaining the Arab national security,” Hafez said.

Two Egyptian intelligence sources cited by Reuters said that Cairo was still insisting that Qatar end support to the Brotherhood leaders abroad in return for the restoration of relations with Doha.

“I think Egypt's reconciliation with Qatar will be a cold peace. Qatar's support for the Muslim Brotherhood will continue,” Samuel Ramani, nonresident fellow at the Gulf International Forum, told Al-Monitor.

“If the past conduct of Qatari media outlets is anything to go by, they might tone down criticism of fellow Gulf monarchies but remain critical of Egypt,” he said. “Egypt reconciled with Qatar not expecting any concessions, so I don't see a partnership forming.”

Ramani opined that reconciliation with Qatar gives the Egyptian president a chance “to show to the administration of US President-elect Joe Biden that he is pragmatic and willing to contribute to the stability of the MENA region.”

Shortly after the GCC summit, Qatari Finance Minister Ali Sharif Al-Emadi arrived in Cairo, where he inaugurated the St. Regis Hotel in Cairo. The hotel, which cost $1.3 billion and stretches over an area of ​​9,360 square meters (2.3 acres), is owned by state-run Qatari Diar real estate company.

“By investing in this project through the Qatari Diar company, Qatar practically confirms its commitment to contribute to supporting Egypt’s tourism sector and its vital role in economic development and job creation, and this project is one of the Qatari investments in Egypt exceeding $5 billion in various fields,” Emadi said during the visit.

“Formally ending Egypt's political rift with Qatar will encourage Qatari businesses that have been sitting on the sidelines to invest in the Egyptian economy,” he concluded.