President Hassan Rouhani appeared more upbeat on the prospects of the Iran nuclear deal on the day that Donald Trump departed from the White House. 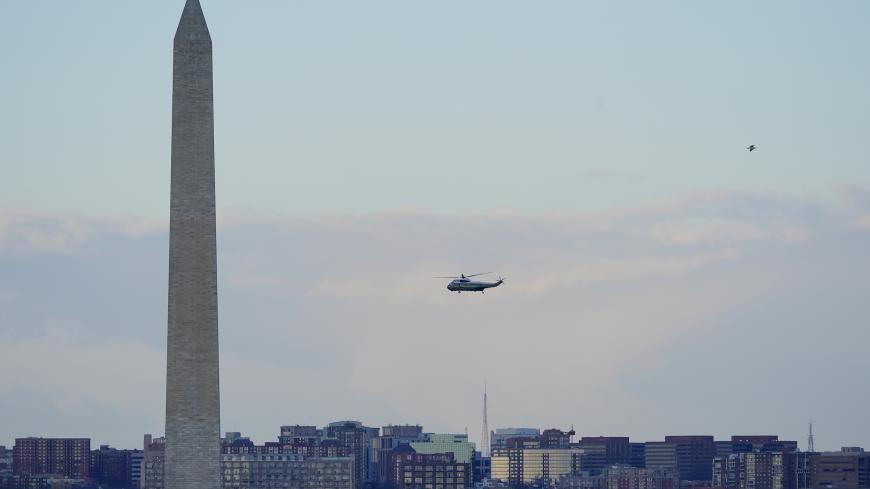 Marine One with President Donald Trump and first lady Melania Trump aboard flies past the Washington Monument as it departs the White House ahead of the inauguration of US President-elect Joe Biden at the US Capitol on Jan. 20, 2021, in Washington, DC. - Patrick Semansky/Getty Images

Donald Trump’s departure from the White House must have prompted a sigh of relief from his Iranian counterpart Hassan Rouhani, who declared the outgoing US leader “dead” and the Iran nuclear deal “alive and more kicking than ever.”

Addressing a Cabinet meeting Jan. 20, Rouhani said that “the ball is now in Washington’s court” to abide by its obligations under the 2015 accord from which Trump walked away in May 2018, reinstating a set of onerous economic sanctions against the Islamic Republic.

Since 2019, in response to the US pullout as well as the perceived failure of European sides to make good on their promises, Iran has been on a phased “commitment reduction” process viewed by the deal’s Western signatories as provocative breaches. Those measures have seen Iran raise its nuclear enrichment level to 20% and augment its uranium stockpile well beyond constraints agreed upon under the accord.

Rouhani once again declared Iran’s readiness to reverse those steps if the administration of President Joe Biden honors its commitments “with honesty.”

But which side comes forward to reinstate the deal appeared to be the sticking point, as the very same condition set in Tehran is also demanded by the other side in Washington.

“If Iran comes back into compliance, we would too,” Biden’s pick for secretary of state Tony Blinken told the Senate Foreign Relations Committee on Tuesday. A new agreement, according to the incoming top US diplomat, could address Iran’s missile program and its regional activities.

Reacting to those comments, Iran’s Foreign Minister Mohammad Javad Zarif made it clear following the Wednesday Cabinet meeting that the US government must return to the nuclear deal “without any need for negotiations.” As for the Iranian missile program and regional activities, Zarif noted that the nuclear deal signatories had agreed from the outset to keep the two issues out of the accord.

Despite Western concerns, Iran has repeatedly insisted that its missile power is not up for negotiations. To Tehran’s adversaries, its regional activities including a military presence in Syria and Iraq are a “destabilizing” factor. The Islamic Republic, nonetheless, argues that the policy has been devised at the behest of regional “sovereign governments.”