Netanyahu lays out campaign for US to maintain course on Iran

Israel is hoping that the new US administration will conduct an intimate strategic dialogue with Israel’s allies in the region before making a final decision on the Iran nuclear issue. 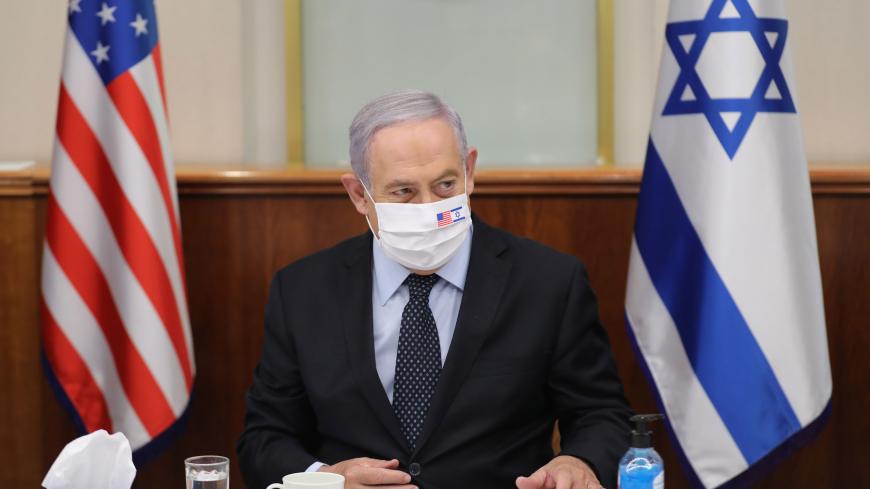 Israeli Prime Minister Benjamin Netanyahu wears a face mask against COVID-19 bearing the US and Israeli flags during a meeting with US special representative for Iran at the prime minister's office in Jerusalem on June 30, 2020. - ABIR SULTAN//AFP via Getty Images

Ahead of Joe Biden’s inauguration as the 46th president of the United States, a broad and fairly cohesive political coalition of Middle Eastern capitals are preparing to present the new administration in Washington with a clear and determined stand: There is no going back to the original 2015 nuclear agreement between world powers and Iran. Iran must not be rewarded for its actions. Conditions have changed as has the situation on the ground. The United States must leverage the achievements of the sanctions on Iran.

Prime Minister Benjamin Netanyahu will likely be the unofficial leader of this Middle Eastern front and the one to present its position in Washington. He is coordinating positions with Israel’s Gulf allies (although he has encountered recent difficulties with Saudi Arabia, angered by the leak of his late November meeting with Crown Prince Mohammed bin Salman), as well as those in Amman and Cairo.

“Some states in the Middle East are even more stressed out than Israel about the changes in the White House,” a senior political official in Jerusalem told Al-Monitor on condition of anonymity. “They are troubled by the people with which [President-elect Joe] Biden has surrounded himself, by the fact that [former President Barack] Obama’s people, who were involved in negotiations with Iran on the nuclear agreement, have been appointed to senior positions in Biden’s administration, and by what they regard as an exaggerated focus on human rights and democratization.”

The official was referring to the appointments of Anthony Blinken as secretary of state, William Burns as CIA director and former Iran deal negotiator Wendy Sherman as deputy US secretary of state. Netanyahu has tasked Mossad chief Yossi Cohen with trying to mobilize this nervous group in order to make it clear to Washington that the region has undergone change. His prospects of success are uncertain.

There is also no certainty that Netanyahu can finagle a meeting with Biden prior to the March 23 elections in Israel. Before then, Biden is unlikely to invite him for fear of being perceived as interfering in domestic Israeli politics and handing Netanyahu the advantage he seeks for his fourth reelection bid in less than two years.

At their first meeting, whenever it takes place, Netanyahu will present the new president with fresh intelligence backed by older information Israel brought to Jerusalem in 2018 along with Iran’s nuclear archives: irrefutable proof that Iran lied when it consistently denied the existence of its nuclear military program. “That information, too, should make the Americans realize their past mistakes and the importance of a steadfast stand now vis-à-vis the ayatollahs’ regime,” a former senior Israeli security official told Al-Monitor on condition of anonymity.

The coalition Netanyahu is piecing together has been buoyed by a recent Pentagon decision that has largely escaped media attention, moving Israel from the responsibility of the US European Command (EUCOM) to that of the Central Command (CENTCOM). Israel was under EUCOM purview for decades despite its territorial proximity to CENTCOM, whose area of responsibility covers the Middle East, the Persian Gulf and parts of Asia. Now, in light of Israel’s newly normalized relations with many Sunni states in the region, geographic order has been restored.

The move is not just symbolic. “The regional architecture has changed,” a senior Israeli diplomatic source told Al-Monitor on condition of anonymity. “CENTCOM is coordinating positions with the countries of the region, which now include Israel and its allies. This has implications for the level of cooperation, intelligence sharing and intimacy. As regards the fight against Iran, from now on the Americans will hear the entire chorus on one stage.”

Meanwhile, Israel and the Gulf States are encouraged by talk from the incoming administration. “There have been quite a few encouraging pronouncements,” said the Israeli diplomatic source. “The Americans are signaling their understanding that 2021 is not 2015, they are signaling that they will not be naive and that they understand the extent of the risks and the volatility of the situation in the region.”

According to current assessments by Israeli analysts, unlike the Obama administration, the Biden administration will conduct an intimate strategic dialogue with Israel and Israel’s allies in the region before making a final decision on the Iran nuclear issue. “We have good reason to believe that will be the case,” another senior Israeli diplomatic source told Al-Monitor on condition of anonymity. “We hear it in remarks by Biden associates and his close circle. We do not believe that we will wake up one morning to discover that secret negotiations are underway between the US and Iran, as we did in Obama’s days.”

The major problem, as outlined by the second senior diplomatic source, is the Biden administration’s understandable desire to distance itself as far as possible from the policies and legacy of President Donald Trump. “We hope they make an exception on the Iran issue,” he said. “We will do all we can to bring all the necessary information to their attention and prove to the Americans that they must leverage the achievements of the sanctions in order to get Iran to accept significant improvements to the nuclear agreement.”

Israeli officials believe the Biden administration will weigh two options: A moderate one in which the Iranians commit to reverting to the original agreement and give up the assets they acquired since the United States pulled out of the deal in return for a significant lifting of sanctions. Jerusalem would regard such a scenario as a harsh strategic blow. Netanyahu is hoping Biden opts for a second, tougher approach — lifting sanctions slowly, gradually and cautiously in exchange for Iran's return to an amended agreement that includes an extended deadline of 25 years rather than 15 and plugging the loopholes on its ballistic missile project and regional conduct.

“We are hearing encouraging remarks from Europe, too,” the second diplomatic source added. “The Europeans also understand that simply going back to the original agreement is not possible and that there is real need for improvements.”