Israel-Emirates peace: An inside look

Crisscrossing Dubai, journalist Ben Caspit says that his four-day visit to the emirate this week reveals the intense potential that lies in the recent outing of Israel’s covert relations with the United Arab Emirates. 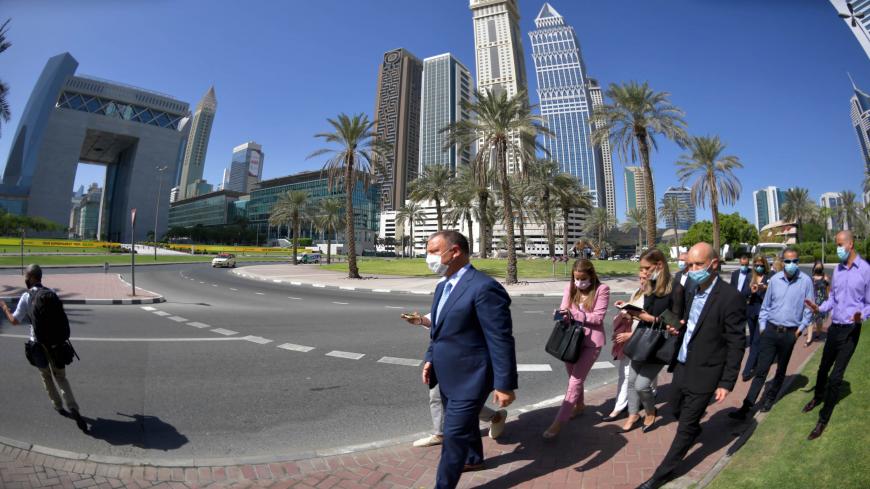 Dubai is gulping the dividends of the peace with Israel with great thirst. Business people, investors and the top echelons of the Emirati economy are rushing to forge promising Israeli connections, and vice versa. A four-day visit to the emirate this week reveals the intense potential that lies in the recent outing of Israel’s covert relations with the United Arab Emirates (UAE).

“It’s like someone wandering in the desert for years, tired, thirsty and hungry, and suddenly arriving at a perfect oasis,” enthused the director of a major Israeli firm on a Dubai visit with a delegation of Israeli high-tech and cyber experts. “And it’s not one-directional. They need us as much as we need them, there is mutual inspiration without the typical, regrettable condescension on our part [toward Arabs]. Dubai is not some forsaken desert principality thirsting for Israeli technology. It’s an amazing regional hub of investment, high-tech, industry and knowledge, a unique and influential leverage for investment and the connection between us and them could be a profit multiplier for both sides,” the director said on condition of anonymity.

On Oct. 26, a group of five Israeli journalists visited the gold and spice markets of downtown Dubai. One of them stopped suddenly and directed the attention of his colleagues to the fact that they were in an Arab state, in a buzzing market, loudly speaking Hebrew without trying to conceal their identity. On the contrary.

He was right. Israelis have toured quite a few Arab markets and countries, including  Egypt and Jordan that have forged peace with Israel, North African states (mostly Morocco) that allow Israeli tourists limited visits and Turkey (which while not Arab is a Muslim state with a regime hostile to Israel). They have grown accustomed to speaking quietly, to hide Star of David emblems under their shirts, to play down their national identity. In Dubai, the opposite is true. Israelis can behave with their customary loudness, walk around with their heads held high and take pride in their origins.

Israel and the UAE are forging a different kind of peace. A cordial peace that is growing warmer with every passing day. The Israeli delegation that visited the Emirates this week was led by former Labor Knesset member Erel Margalit, a high-tech and social entrepreneur and chair of Jerusalem Venture Partners capital fund. He and the 13 CEOs and other leading business people he brought with him were greeted with enthusiasm. There was no need for small talk to break the ice. Margalit and the delegation members hit the ground running. They have been doing business in the Emirates for several years, but kept a low profile and used various covers. The affair has now burst into the open, big time.

On Oct. 27, Margalit met with Minister of Food Security Mariam bint Mohammed Saeed Hareb Al Muhairi. He brought with him to the meeting the director of an Israeli firm that is developing hummus that contains 70% protein, and the director of another firm that has developed a sensor that triggers immediate alarms against palm tree pests and enables their elimination before they can cause significant damage.

Margalit told Al-Monitor the meeting “was super exciting and inspirational. The minister expressed her desire to do great things with us. She is a combination of modesty, capability and ambition. The Emirates are a gateway to markets of 3 billion people and they have a tradition of phenomenal trade capacity. I was shocked to realize the extent to which she is familiar with what we do in our cyber centers in the Galilee and Jerusalem. There are 35,000 farmers in the UAE for whom food-tech could be a godsend. I have no doubt that we will do great things together. We have much to learn from them. The government here is an integral part of entrepreneurship to an intense degree.”

“The elephant in the room” did not come up in the Dubai meetings. No one mentioned the shared Israeli-Emirati interest in blocking Iran’s expansion, which is of grave concern to the Sunni Arab states. Among the delegation members was David Meidan, a former senior Mossad official tapped to head the agency after its leader Meir Dagan stepped down. Meidan has been doing cyber-related business in the Gulf states for years and is one of the better known and accepted Israelis in the region.

The delegation also included Israeli cyberwarfare and security experts who held intriguing meetings with their Emirati counterparts. “They are counting on us in this field,” one of them told Al-Monitor on condition of anonymity. “Just like Israel, countries here are exposed to cyberthreats from Iran and they know that Israel has a different level of offensive and defensive cybercapacities. They want our help in this sphere as quickly as possible.”

The next stage in the fast-moving relationship between Israel and the UAE is the launch of regular daily flights from Tel Aviv to Dubai, expected within a few months. When this happens, the Emiratis will surely experience a so-called baptism by fire, with an onslaught of Israeli tourists who have made a dubious name for themselves around the world. Nonetheless, UAE tourism has been hit hard by the coronavirus pandemic and is keen to welcome shopping-starved Israelis after long months of being stuck at home.

Israeli Prime Minister Benjamin Netanyahu is also scheduled to make an official visit to celebrate the diplomatic achievement to the hilt. Netanyahu has instructed government ministers to avoid visits to Dubai until he himself can conduct the historic trip and cut the ribbon.

Contrary to many past events, this time Netanyahu has earned the credit. True, he did not disclose to the public or his government the green light he gave the United States to sell stealth jets to the Emirates in return for the peace deal, muted the role of his predecessors in laying the infrastructure for the ties and described the deal as “peace in return for peace,” despite the fact that he was forced to set aside his dream of territorial annexation. Having said all this, it is nonetheless a historic, exciting and sufficiently inspiring breakthrough to crown Netanyahu’s positive legacy. Enough has already been said (and will probably be said) about its negative aspects.