Why Israelis flock to the Emirates

The normalization agreement with the Emirates was signed just a few weeks ago, but Israeli businesspeople, athletes and tourists are already flocking there. 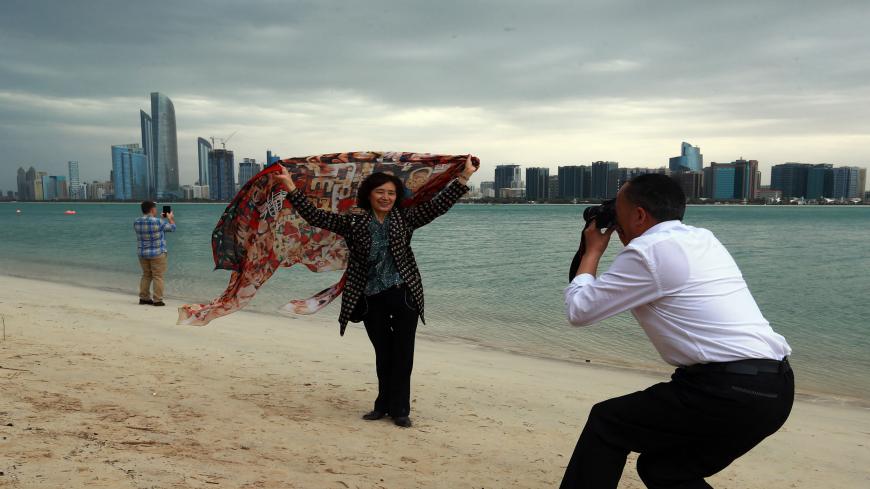 Fleur Hassan-Nahoum was very excited as she returned from a visit to the United Arab Emirates (UAE) this week. The deputy mayor of Jerusalem had all sorts of plans for relations between her city and the UAE. Hassan-Nahoum, who holds the foreign affairs, business development and tourism portfolios in the municipality, flew there to lay the groundwork for Muslim tourism to Israel, which is expected to grow exponentially as a result of the Abraham Accords. Jerusalem is already preparing for hundreds of thousands of Muslim tourists to flood the country once the coronavirus pandemic is finally over.

“These people really want a genuine, warm peace. They were so excited to host us,” Hassan-Nahoum told Al-Monitor, during a conversation that took place upon her return to Israel. During her five-day visit to Dubai, she met with dozens of businesspeople and senior government officials. “I’ve never been received so warmly anywhere else in the world. We will see the economic benefits of this peace very soon. Israel and the UAE have the two most advanced economies in the Middle East. This will open new worlds for us and tourism will be a powerful economic engine of growth.”

Hassan-Nahoum believes that Muslim tourism to Israel will thrive, just like Christian tourism and pilgrimages to the holy sites. Inevitably, the main attraction for Muslims will be the Temple Mount.

Hassan-Nahoum also founded an Israel-UAE Business Council to allow businesspeople and entrepreneurs from both countries to connect. Some 2,500 people have registered for this online platform, and collaborations in fields like technology and energy are already being made. She also founded a joint Israel-Gulf Women’s Forum, and delivered a message from East Jerusalem’s Arab population to senior officials in the UAE, asking them to use the peace to improve their economic standing. All of these initiatives were launched simultaneously. Next week, Jerusalem Mayor Moshe Leon is expected to pay an official visit to Abu Dhabi.

Hassan-Nahoum is not the only Israeli public figure to establish a broad and active network of ties with senior UAE officials. It has been just a little over a month since the peace agreement with the UAE was signed in the White House, but it looks like both countries were ready for it. Israeli delegations set out for Abu Dhabi just about every day, despite the coronavirus, and collaborative efforts in just about every field are already being cobbled together. It seems obvious that, were it not for the pandemic, the normalization agreement would have an even greater presence in the country. Nevertheless, even under these challenging circumstances, things are happening quickly.

On Oct. 25, a high-tech and communications delegation landed in the Emirates. The group was headed by entrepreneur and former Knesset member Erel Margalit. The direct flight to Abu Dhabi flew over Saudi Arabia, something that would have seemed impossible just two months ago. The delegation is scheduled to meet with senior ministers and government officials in order to establish new working relations with high-tech investors. On Oct. 26, Margalit tweeted a photo of himself addressing Emirati investors. The caption read, “Big things are happening in terms of business and personally. It is very exciting. It makes me very happy.”

Margalit is very familiar with the state of markets in the Gulf states. Just before he left, he said, “It’s going to be a pleasure to work with them on big projects. The delegation includes companies that provide existing solutions for companies in Dubai, but also companies that offer new models that are likely to spread throughout the entire Arab world. Digital medicine is a huge field here, while cybersecurity is very important for a country that is located just 10 kilometers [6 miles] from Iran, and under constant threat from there.”

The delegation was invited to the UAE by the Dubai International Financial Center, which operates the free trade zone in the center of Dubai — one of the major financial centers in the world.

One industry that is especially active in the UAE is tourism. After suffering enormous damage for the last few months, it has received a shot of encouragement because of the new opportunities it faces. Delegations of travel agents, airline executives and journalists covering tourism can be found everywhere in Abu Dhabi, despite pandemic restrictions imposed. Just last week, a delegation of senior Israeli members of the tourism industry landed in Dubai at the invitation of the Emirates’ Etihad Airways.

The Israeli media is chock full of ads and articles about the UAE’s tourist potential, and tickets and vacation packages are already being sold. Scenes from vacation sites, lavish hotels, markets and desert landscapes stir the imaginations of Israelis. Travel agents also report growing interest in organized tours offered by major companies.

The Geographical Company is one of Israel’s oldest and most established tourist companies. The company already offers package tours, which include a visit to the UAE for a few days, along with a visit to other target destinations offered by Emirati travel companies, including the Maldives.

The agreement between Israel and the UAE allows for 112 flights between the countries per week. The volume of busines is enormous. One airline, Arkia Israeli Airlines, has already announced a daily flight to Abu Dhabi, i.e., 14 return flights per week.

On Oct. 25, just hours after Israir Airlines announced direct flights to Dubai, the company had already sold 500 vacation packages there.

Another target destination of interest is Bahrain. Israeli airlines are already preparing for this by marketing direct flights and vacation packages there. Recently, Bahrain and Israel signed an agreement allowing each country to operate as many as 14 flights per week between Manama, the capital of Bahrain, and Ben Gurion Airport, and unlimited flights between Bahrain and Eilat. There will also be five weekly cargo flights between the two countries.

There is an intense desire for collaborative ventures in just about every field. Earlier this week, the Maccabi Haifa soccer team signed an agreement with the Al Ain soccer club of the UAE. The two teams are expected to meet for a friendly match in Abu Dhabi soon.

“It’s clear to me that this is just the beginning,” Hassan-Nahoum said. “Big things really are about to happen. They’re waiting for us there. The hotels have kosher food and lots of genuine goodwill. They want good relations between our two peoples.”