Israeli business people are already in contact with hotels at the United Arab Emirates, who wish to accommodate their kitchens to the Israeli tourists. 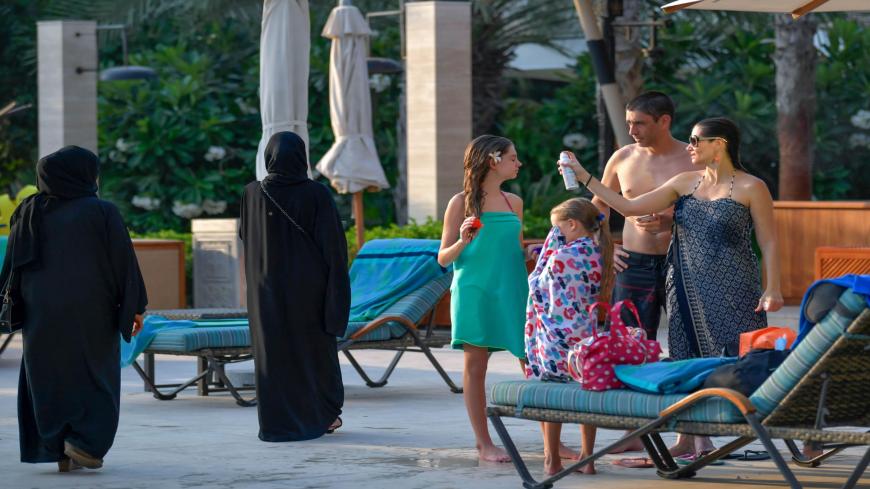 Tourists sunbathe by the pool of Al Naseem Hotel in the Gulf emirate of Dubai in the United Arab Emirates, July 7, 2020. - KARIM SAHIB/AFP via Getty Images

The United Arab Emirates (UAE) are awaiting a wave of Israeli tourism, and the Abu Dhabi Tourism and Culture Ministry has distributed a letter to hotel and tourism managers to prepare for the arrival of Israelis, among other things, by adding kosher food to their restaurant and room service menus. The letter said that some kitchens must be made kosher and prepared for the requirements of Jewish dietary laws, and that there will be ongoing kashruth supervision as is customary at hotels in Israel.

The reason for this instruction/request is that many Israeli tourists as well as Jews from around the world have made inquires directly to hotels and Emirati tourist agencies. Israel has declared the UAE a country from where citizens returning from a visit do not have to quarantine upon their return to Israel, and the upcoming holiday season — starting with the Jewish New Year on Sept. 19 — during which Israelis typically vacation abroad, has made this destination especially attractive, and tourist companies have started to market such packages.

Airlines are also preparing. The four Emirati airlines could start direct flights, and Israir, based in Tel Aviv, has already submitted a request to start such a direct flight, and even priced it, at $299.

The problem is that at this stage Israeli passport holders cannot obtain a tourist visa, and only Israelis with a foreign passport can enter the Gulf state.

The assumption is that during the Sukkoth holiday in mid-October those Israelis with foreign citizenship and Jews from around the world, especially the United States, would travel to the Emirates. Emirate tourism officials hope that in addition to hundreds of reservations already made from Israel, once kitchens are made kosher thousands more will follow. Additional inquiries to hotels came from Israeli and international tourist agencies that have started to receive a flow of reservations for vacations at Emirati hotels. Israeli TV channels have broadcast reports on tourist sites and fancy hotels at the Gulf principalities, including price comparisons, nearly daily for the past few weeks.

Prime Minister Benjamin Netanyahu as well as officials from the UAE have declared that the agreement they reached inaugurates an era of warm, active peace that will flourish on all levels, which will be reflected most prominently in the tourism sector.

One such initiative is the project of Ofir and Matan Bar-Noy. The brothers have recently founded the Emirates-Israel Investment Group. It was established in a flash, a short time after the declaration on normalization, and intends to function as a bridge to mediate and help Israeli companies seeking business connections in the Emirates. The company is advised by former Communications Ministry Director General Nati Cohen, and Canadian-Israeli businessman Bernard Sand is a partner. Speaking to Al-Monitor on the phone from Dubai, Ofir said that even before the agreement this region was interesting for them, and now that normalization has been established it is clear that the opportunity has arrived and that it is time to enter the market.

The Bar-Noy brothers have held a series of meetings with representatives of Emirati investment funds, banks and importers, whom they have offered to connect to a number of Israeli companies that seek to sell their products or to interest investors. One of the interesting insights they had during these meetings was on tourism and kosher food. Both government sources and tourist agencies wished to check with them information regarding dietary requirements for hotels for religious Jewish guests.

Several ideas are being pursued. Parts of restaurants and kitchens could be turned kosher; small hotels could actually be entirely kashered — just like Israeli hotels are.

According to Matan, several large Israeli tourist agencies have already expressed concrete interest in bringing Israeli tourists to the UAE, and to suit tourist services to their needs, including kashruth. “We have two or three Israeli companies that meet the criteria, and we will connect at least one of them to the [UAE] entrepreneurs and government officials we have spoken with at the various principalities. One of the huge companies here has already signed with us an agreement to represent them in Israel. They expect masses of tourists.” He also said that one of the suggestions that was raised was booking an entire hotel for the Israeli-Jewish holiday season, and that there is complete willingness to do so if forecasts pan out.

But the Jewish High Holiday season is starting soon. The agreement hasn’t been signed yet, granting entry visas to Israelis is complicated and a tourist visit is currently not one of the reasons a visa may be issued to Israelis — contrary to a business visa. There have been many inquiries to both Israel and UAE foreign ministries to allow the visas to be granted even before official diplomatic missions are established, perhaps by means of another Arab mission in Israel, to allow Israelis to visit during the Sukkoth break, one of the high seasons of outgoing Israeli tourism.

According to Matan, the Emiratis are suggesting vacation packages geared toward the Emirati tourist to Israel. The highlight for them is of course Jerusalem, with its Al-Aqsa and Al-Omar mosques, but also other sites such as Eilat and Nazareth.

In general, the speed at which contacts between Israeli and Emirati companies and businessmen have been made has surprised all sides. It’s true that commercial contacts have existed for more than two decades, but now that legitimacy has been granted, the dams have broken. According to information flowing from various sources — including the Israeli Union of Chambers of Commerce, the Manufacturers Association, the Foreign Ministry, as well as Emirati sources — there is a real flood of inquiries to create contacts between businessmen, companies, funds and financial agencies from the two states.

“Within a week we received more than a thousand inquiries from Israeli businessmen to help in making contacts and receiving a business visa to enter the Emirates, and this doesn’t include those with foreign passports who don’t need such a visa,” a senior Foreign Ministry official who deals with this issue told Al-Monitor on condition of anonymity.

Indeed, Israeli business delegations seem to be leaving almost daily for the Emirates. These include quite a few religious Israelis. Kashruth at hotels would surely make their stay more pleasant. A Bank Hapoalim delegation arrived to the UAE last week, and another delegation from Bank Leumi will arrive within days. The two delegations include also senior businessmen. More Israeli corporate delegations from many fields are expected soon.