Just days after Israel and the United Arab Emirates normalized relations, a kosher restaurant has opened up in Dubai. 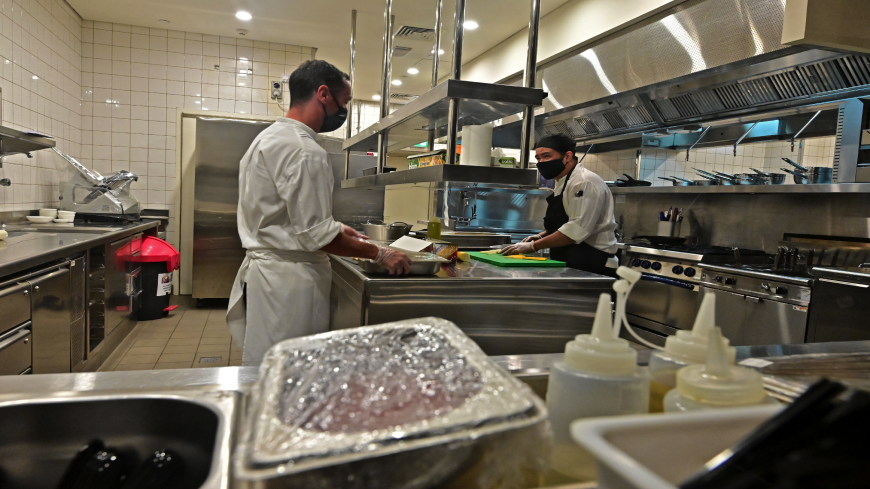 Fabien Fayolle (L), the chef at Armani/Kaf, Dubai's first kosher restaurant, is pictured in his kitchen on Oct. 4, 2020, in Dubai. With the ink on the signing of the United Arab Emirates' landmark peace accord with Israel still fresh, restaurants and caterers are rushing to prepare for what they hope will be a flood of Jewish visitors arriving on new direct flights. - GIUSEPPE CACACE/AFP via Getty Images

DUBAI — On a recent evening — in an obscure corner of the world's tallest building, Dubai’s Burj Khalifa —men in kippahs tucked in plates full of hummus. A woman snapped photos of a beautifully presented salmon fillet. An Emirati bigwig in a white thobe and matching headdress engaged in earnest conversation with an Orthodox Jew. "Is there carryout service for the Shabbat?" a customer asked. "There is," a waiter responded.

“Welcome to Kaf,” said a large, avuncular man. He introduced himself as Bension Duchman, the mashgiach — or dietary supervisor — of the United Arab Emirate’s first kosher restaurant. “I hope you enjoy your meal,” he said.

Located on the ground floor of the Burj Khalifa’s ritzy Armani hotel, Kaf opened its doors Sept. 17, just two days after the UAE and Israel signed the Abraham Accords, laying the ground for formal diplomatic relations between the two countries.

Even before the ink on the protocols dried, the two countries embarked on collaborations in finance, medicine, sports and culture.

The first commercial flight from Dubai to Tel Aviv landed at Ben Gurion airport Oct. 19, the first of what officials hope will be as many as 28 per week.

Until recently, few knew that the UAE is home to a tiny community of Jews said to number between 500 and 1,500. They are served by three synagogues — two in Dubai, and a third in Abu Dhabi that just opened its doors. Now they are stepping out of the shadows as the UAE opens its arms to Israel. “The UAE is a true beacon of light, an inspiration to its neighbors, to the whole Middle East. Imagine in the Khalifa tower, named after the ruler, there is a kosher restaurant,” marveled Duchman’s brother Levi, a disciple of the Hasidic Chabad-Lubavitch movement who came to the UAE from his native Brooklyn six years ago at age 21 to become the UAE’s first resident rabbi “with the UAE authorities’ full support.”

The Duchmans have since established the first kosher slaughterhouse in the Emirates along with a kosher certification agency.

“We are probably the first kosher agency in the world to sign an agreement with the Ministry of Tourism to kosherize hotels in the country. I am wondering if you even have such a thing in Israel. It’s the beginning of a new era, of a new time,” Levi told Al-Monitor in an interview. 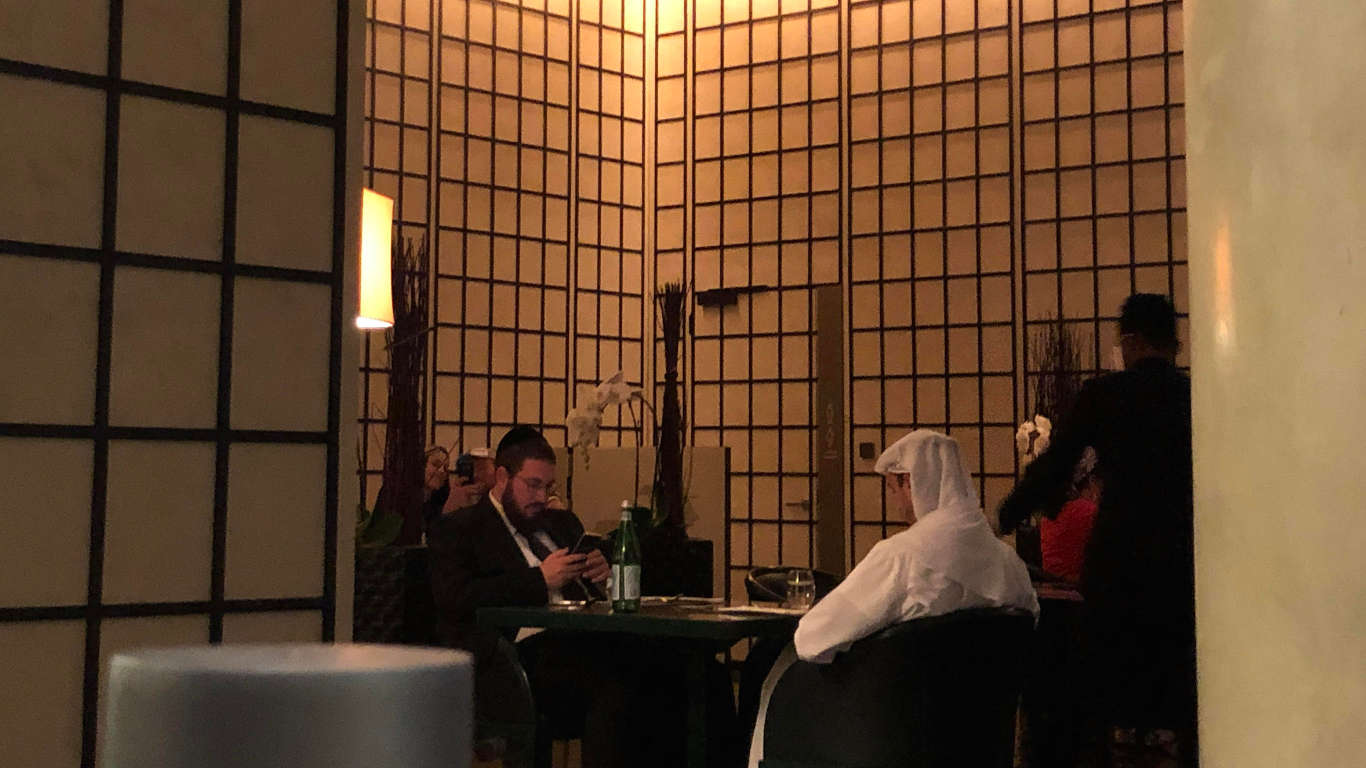 Dubai will soon be getting its second full-time rabbi — and Duchman a rival — with Beirut-born Elie Abadie, according to the Jewish Council of the Emirates (JCE).

The JCE is the country’s oldest congregation that is formally recognized by UAE authorities as the official representative of the local Jewish community. It views Levi as a maverick.

But the New Yorker remains unfazed. “Our focus has always been who two could meet together to always benefit a third,” he said. Levi's enthusiasm may sound naive to the army of cynics who have dismissed the accords as a cynical ploy on the part of the UAE’s Crown Prince Sheikh Mohammed bin Zayed to make nice with Washington, counter regional foes Iran and Turkey, and whitewash his authoritarian rule.

Unquestionably, pragmatism is driving the thaw with Israel. Bahrain and Sudan have followed suit, signing agreements of their own with Israel.

“Insistence on normalization with Israel has long been part of a US policy to prop up compliant dictators in the Middle East and North Africa, providing them with the financial and military resources they use to crush dissent in exchange for conformity with US dictates, which include accepting Israeli domination over Palestinians,” argued American and Israeli human rights lawyer Sari Bashi in the online publication Responsible Statecraft.

Under its veneer of determined modernity — foreign women wander the streets unharassed in shorts, a mission to Mars was launched this year — the UAE is a police state where opponents of the royals are ruthlessly punished and a sea of security cameras monitors one’s every move.

When Israeli tourists do start coming in earnest, they may be hard-pressed to meet actual Emiratis. Over 88% of the population is composed of foreign workers, most of them from India, Pakistan and Bangladesh.

Yet regardless of the UAE’s motives, for many, the normalization of Jews and Judaism by an Arab country just a stone’s throw away from Iran is a very big deal, especially as relations with Turkey — which used to be Israel’s best Muslim friend — have hit an all-time low under its Islamist president, Recep Tayyip Erdogan.

“Israel learned from its previous peace accords with Egypt and Jordan the processes of making peace and building peace are different ones,” observed Ofir Winter, a research fellow at Tel Aviv’s Institute for National Security Studies.

“The UAE’s discourse of Islamic tolerance for Judaism contributes to the concept of the Jews as belonging to the regional fabric as opposed to a foreign entity, as many used to describe Israel in the past,” Winter told Al-Monitor. "It encourages narratives of joint Muslim, Christian and Jewish life as a natural and desired situation."

“Even if it is public relations, I am still OK with it. After all, it is better than the opposite, in which there is a race to the bottom over who in the region can outdo one another in terms of Jew hatred,” wrote Steven A. Cook, a senior fellow at the Council for Foreign Relations, in a recent essay for Foreign Policy.

Moran Zaga, an Israeli academic who specializes in relations with the Gulf Arab states, noted that for many years the dominant narrative in Israel following the assassination in 1995 of Prime Minister Yitzhak Rabin was that Israelis were isolated and surrounded by a sea of hostile states in the region. “In recent years, [Israeli Prime Minister Benjamin] Netanyahu shifted this narrative by promoting the idea that there are Sunni moderate countries that share similar worldviews and interests. Today, this thesis is proving itself, and ordinary Israelis are excited about the fact that they are not isolated anymore and they have found new friends in the neighborhood,” Zaga told Al-Monitor.

While the UAE’s rigid security rules are irksome to its own citizens, for Israelis it means they can feel safe away from home. “This is one of the safest places in the world; that’s why I chose Dubai as my main base,” said an Iraqi multimillionaire who requested anonymity, echoing widespread views among the expat business community.

It remains to be seen whether ordinary Emiratis will reciprocate the enthusiasm and travel to Israel in the same numbers that Israelis are expected to travel to the UAE. The Abraham Accords allows for 112 flights per week.

The Dubai-based Khaleej Times, which published a Rosh Hashanah supplement Sept. 18, quoted industry sources as saying that there will be sizeable demands on both sides, with a lot of Muslims, both Emirati nationals and foreigners alike, wanting to visit the Al Aqsa Mosque in Jerusalem. India, home to 173 million Muslims, has excellent relations with Israel.

Pakistan and Bangladesh, however, do not permit their citizens to travel to Israel.

Not for long, Rabbi Duchman said. “With enough light, you can push away the darkness. With fire, you can melt an iceberg. Iranians, Saudi Arabians — they are all going to want to do it,” he predicted.