The exhausting pre-Passover cleaning needed to rid observant houses of leavened bread has inspired many ultra-Orthodox families to celebrate Passover in hotels instead of at home and even led to specialized overseas vacation packages. 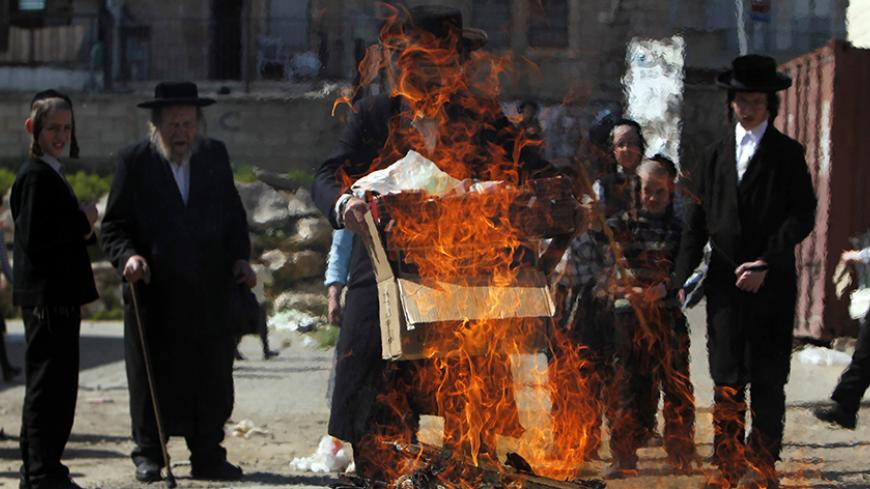 An ultra-Orthodox Jew holds a box near a fire burning leaven in the Mea Shearim neighborhood of Jerusalem, ahead of the Jewish holiday of Passover, April 6, 2012. Passover commemorates the flight of Jews from ancient Egypt, as described in the Exodus chapter of the Bible. According to the account, the Jews did not have time to prepare leavened bread before fleeing to the promised land. - REUTERS/Ronen Zvulun

Many people in Israel consider Passover to be the most exhausting Jewish holiday of all. Apart from all the religious restrictions on eating "hametz" — leavened foods — many are still traumatized by childhood memories of the thorough Passover cleaning sessions that preceded the holiday. To prepare the home for Passover, all remains of hametz must be eliminated, no matter where they might be found. This obviously includes the kitchen, but also covers crumbs in mattresses, toys and every last book.

Over the past few years, some have been solving the cleaning problem in a very simple (but decidedly more expensive) way. What started with the general public and spread to the religious nationalist community is now reaching the ultra-Orthodox sector as well. Entire families, including all their children, leave home right before Passover and move into a hotel. They will stay there for all of the weeklong holiday, until the very end of Passover. People who choose to go to a hotel for Passover not only avoid the exhausting cleaning process. They also enjoy full room and board and get a real chance to rest. Most kosher hotels for Passover are in Israel, but they can be found in hotels overseas as well, especially in Europe. These hotels are rented out in their entirety for the seven days of the holiday and made completely kosher for Passover under rabbinical supervision.

“As far as the ultra-Orthodox community is concerned, the phenomenon actually began in the United States and then immigrated to Israel over the past few years,” says Yaakov Strasser, CEO of Telechofesh, a company that promotes tourism among the ultra-Orthodox community. “It started with people who work right up until the holiday, and therefore have no time to clean their homes thoroughly. Now it is already a kind of annual vacation for many.”

According to Strasser, the demand for and variety of these types of Passover packages have skyrocketed over the past few years. “Ten years ago, there were very few options, and the phenomenon was rather marginal. Now we are talking about some 50 hotels in Israel and around the world that offer Israeli vacationers holiday packages that meet all the Passover requirements. Prices start at 10,000 shekels [$2,650] per family and can go as high as 60,000 shekels [$15,900] per family to celebrate Passover in Cancun, Mexico.”

Shaya Weiss, 50, lives in the ultra-Orthodox city of Bnei Brak, on the outskirts of Tel Aviv. He has six children and owns his own business. This will be the fifth consecutive year that he's gone away for Passover. “It’s addictive,” he tells Al-Monitor. “We spent our Passover vacations in Israel for the first few years, but then we started flying overseas. With today’s low costs, the difference really isn’t that much as far as costs are concerned, and you are really upgrading your annual family vacation. Three years ago, we were in Dresden, in Germany. Two years ago, we went to Davos, Switzerland, and this year we are in Prague. We are independent and work right up to the holiday. This solution is perfect for us.”

While the phenomenon is growing rapidly, so is opposition to it among the ultra-Orthodox leadership. On April 14, Rabbi Israel Meir Friedman, the rebbe of the Sadigura Hasidic court and a member of the Council of Torah Sages, attacked the phenomenon directly, saying, “The order of the day [on Passover eve] is to fulfill the commandment of ‘You shall tell your children.’ [I call on people] not to go to hotels and guesthouses. Everyone and their families should celebrate the Seder [at home] and tell their children the story of the miracle.”

The ultra-Orthodox Mir Yeshiva in Jerusalem, Israel's largest rabbinical college, responded similarly. This year it issued a ruling that banned single students from going to hotels on their own for Passover because of the “spiritual and physical temptations in these places, which run counter to the thinking of our sages.” The ruling holds that any student who goes to these hotels without his family will be expelled from the yeshiva.

Strasser admits that the people who go away for Passover are probably slightly less devout. “There is an assumption, though I don’t know if it’s true or not, that hotels can’t keep hametz out the same way that people do in their homes,” he admits. “Furthermore, the most devout people try to avoid eating manufactured foods over Passover, out of concern that it might contain hametz, and food produced by hotel kitchens obviously meets the definition of manufactured food.”

He also says that there is the matter of family celebrations during the holiday. The very nature of the holiday suffers somewhat in a hotel. “For many people, sitting in a hotel dining room for the Seder night with all the other guests is akin to desecrating the holiday. For those people, we now offer a vacation package that begins right after the first day, or in other words, for all the remaining days of the holiday. There are also some families who ask to be seated in a private family room for the Seder, instead of with everybody else. That is also possible.”

Weiss looks a little uneasy when asked about the quality of the kosher supervision and the character of the holiday in a hotel setting. “Today, the kosher supervision in hotels is better than it is in my house,” he says after thinking for a moment. “The hotel has a team of kosher supervisors and experts, and that is their entire job. At home, the kids spread hametz everywhere up until the last minute.”

As for the character of the holiday, Weiss admits that it was a consideration before he first decided to go to a hotel, but he says that his concerns disappeared after experiencing a Passover holiday there. “First of all, Passover is the Festival of Freedom, so I think that main characteristic of the holiday should be freedom. In my house, given my circumstances, it would be more like slavery,” says Weiss, adding, “We always order a separate dining room and have a very family, personal Seder.”

The popularity of families going to a hotel for Passover, even if the hotel meets the most stringent Jewish dietary demands, says quite a bit about the greater openness shown by large swathes of the Orthodox and ultra-Orthodox communities in Israel as they adopt more middle-class behaviors. When people work more hours, they tend to earn more, so they can allow themselves a costly Passover. The reason the rabbis aren’t really combating the phenomenon is apparently because it doesn’t threaten the religious devotion of the core ultra-Orthodox community in Israel. These people would never go to a hotel for Passover, even if it were offered to them for free.