With the signing of the Abraham Accords and the opening of Emirati, Bahraini and Moroccan diplomatic missions, Israel is now preparing for an unprecedented wave of Muslim tourists. 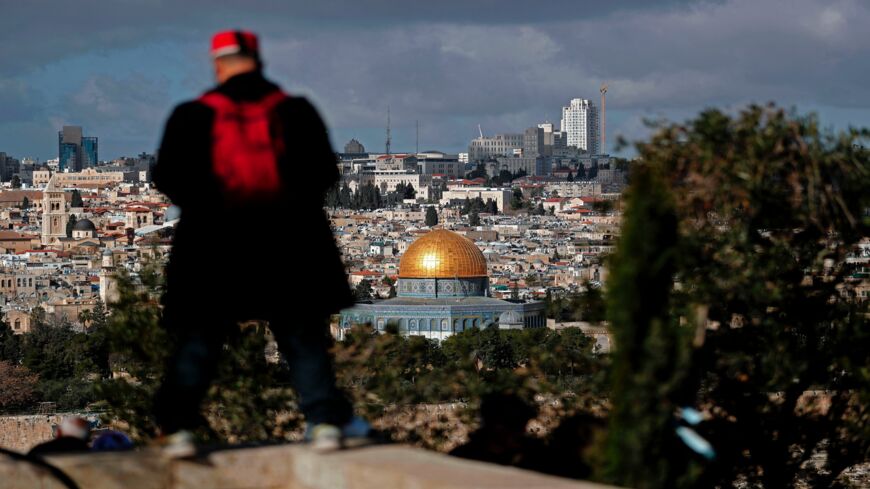 A picture taken from the Mount of Olives on Jan. 20, 2018, shows a Muslim tourist viewing Jerusalem's Old City and the Dome of the Rock. - THOMAS COEX/AFP via Getty Images

There are about a billion and a half Muslims in the world, yet only several thousand of them visit the holy sites in Jerusalem each year. The Abraham Accords signed in 2020 between Israel, the United Arab Emirates, Bahrain, Morocco and Sudan constitute a tremendous opportunity to change that picture.

By contrast, the reverse direction is much more active: Tens of thousands of Israelis (almost 70,000 in December alone, before the COVID-19 lockdown reached Dubai) are already visiting tourist sites in the countries that signed these normalization agreements. Direct flights with Etihad Airways are expected to open in the very near future from Dubai to Tel Aviv — this was announced last November, but it was delayed due to COVID-19 closures.

The two countries, Israel and the Emirates, are world leaders regarding the quick pace of their vaccination programs; this enables the mutual opening of both countries to tourists. Eli Harel, who escorted Israeli groups this week in Dubai, said all the Emirate travel agents he is in contact with ask him for details and information regarding the opposite direction: Muslim tourism in Israel.

In fact, Israel’s Tourism Ministry has been busy in recent months making hectic preparations and doing research toward marketing Israel as a potential target for Muslim tourists from Arab countries.

Tourism Minister Orit Farkash-Hacohen told Al-Monitor that “governments sign agreements, but people are the ones to make peace through tourism. As soon as the Abraham Accords became a reality, Israel’s tourist branch began preparing for Muslim tourism, which had always been very insignificant in Israel. I’ve spoken to my equivalent in the Emirates, Bahrain and Morocco, and I know there is good will to come and tour here.”

Ksenia Kobiakov, the new markets development director in the ministry, said they anticipate tens of thousands of Muslim tourists in the upcoming months and hope to welcome millions of such tourists within a few short years. “I know that my forecast is optimistic, but it is definitely based on a realistic evaluation of tremendous potential.”

How are they preparing? Noga Sher-Greco, director of religious tourism, said the ministry is mapping religious Muslim sites throughout Israel and examining how they can be prepared for the anticipated wave of tourism. Some examples: There will be more signs in Arabic and English, and captions will emphasize the Muslim importance of the sites. Also, information and instructions are being forwarded to tourist agents and heads of tourist bureaus regarding how to approach new tourists from Muslim countries, whether from the Emirates or other places. The ministry holds seminars and internships regarding Islam for the tour guides and tourist agents, as well as workshops via Zoom for the hundreds of travel agents from the Emirates.

Morsi Hija, chairman of the Tour Guides’ Forum in the Arab sector in Israel, cooperates with the Tourism Ministry in its preparations. He said for Muslim tourists arriving in Israel, there are two “must-see” religious sites: the Al-Aqsa Mosque and the Dome of the Rock in Jerusalem’s Old City; and the Tomb of the Patriarchs in the West Bank's Hebron. There are also other sites that could attract Muslim tourists, including the El-Jazzar Mosque in Acre and the Horns of Hattin site where Saladin decisively defeated the crusader army.

Hija said the added value of this tourism is not only economic in nature, but it is also important for creating connections between Israelis, Jews, Christians and Muslims with tourists from Islamic countries. With that, the assumption in Israel is that new tourists will also want to experience Israel’s cultural and economic capital, Tel Aviv.

Indeed, Mohamed al-Mogini, owner of a large tourist agency in Dubai, told Al-Monitor that while the typical tourist from the Emirates or the Gulf will indeed want to view religious sites, they will also want to tour Tel Aviv and other attractions such as nature sites like the Sea of Galilee and Mount Hermon.

Shahar Shilo, tourism coordinator for Har Hanegev and Mitzpe Ramon local councils and researcher at Ben Gurion University, told Al-Monitor the Abraham Accords involve processes that will change Israel’s status in the entire Muslim world. Shilo cites data from the World Tourism Organization that Muslim tourism is expected to constitute about half of all world tourism by the year 2050. Most of the potential is from states such as Indonesia, Malaysia, India and other countries with large Muslim populations that are not necessarily Arab.

Shilo also brought up another point: Beyond the religious issues of Muslim heritage, Israel is admired by Muslims for being technologically advanced and high-tech savvy. Thus, many Muslim tourists might want to observe examples of these, such as desert agriculture. Shilo believes Saudi Arabia is the key state here. Should it enable its citizens to visit Israel, many other Arab and Muslim countries will follow.

Yossi Fatael, who heads the Israel Incoming Tour Operators Association, said there have already been many requests from Muslim groups to organize packages, tour guides, etc., for them. He explains that the Emirate’s Etihad Airways is already examining possible tourist trips together with other countries. For example, a Muslim tourist from the Far East could pass through the Emirates to sites in Saudi Arabia, and then from there to Jordan and from Jordan to Israel to spend two or three days visiting Jerusalem.

Fatael claimed Dubai and Abu Dhabi are major, worldwide travel stops for tourists from the East taking connecting flights. And this, of course, has the potential for connecting flights to Israel. However, Fatael warned that for this to happen, the strict security questioning when entering Israel must undergo change, mainly for Muslims, to be friendlier in nature while still protecting state security. Another issue is that of the Al-Aqsa Mosque: Emirate tourists have been allegedly humiliated there by the Palestinians, says Fatael, and that problem must also be resolved.

Farkash-Hacohen emphasized that her ministry will do all it can to make new tourists feel welcomed and offer them as many different tourist packages as possible. “We’ve uploaded relevant content in Arabic to the internet and special Facebook and Instagram accounts; our goal is that our new Muslim friends will feel at home in all our hotels. We are also gearing up to create joint packaged tours; for example, a package would include a visit to Jerusalem and also visits to Bahrain and the Emirates. This way, the entire region will become more important in the world.” Once the skies reopen, and for the coming years, she would like to see 100,000 Bahraini and Emirati tourists visiting Israel annually.