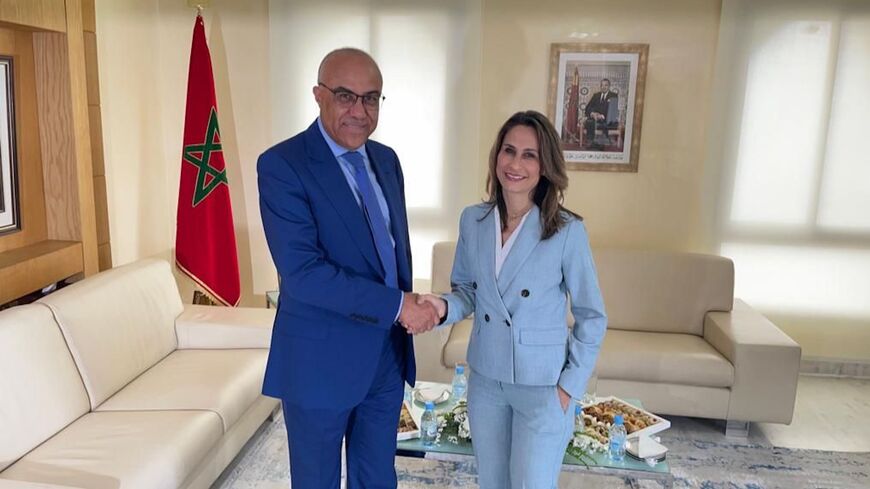 A statement issued by Farkash-Hacohen’s office said this was the first agreement of its kind between the two countries. It further noted that the agreement covers several fields such as artificial intelligence, agricultural technologies, water management and water desalination, battling desertification, food processing technologies, development of biotechnologies, renewable and clean energies, medical and pharmaceutical industries, smart cities and the automotive industry, information technology and innovation in space.

The ministers agreed to establish a joint working team that will oversee the implementation of the agreement, including the establishment of joint funding for research and development, scientific meetings and more.

Speaking at the signing ceremony, Farkash-Hacohen said, "Governments sign agreements, but people make peace. I am thankful for the honor of coming to Morocco following the Abraham Accords and signing an important cooperation agreement between our two countries. Together we will work to advance challenges in the fields of space, renewable energy, water technologies, transportation, science, environment and health. Israeli high tech and science are strategic assets of Israel's foreign relations. Thank you very much to the minister of research and innovation of Morocco for the joint work."

After the signing, Farkash-Hacohen commented on the three agreements she had championed so far in the framework of the Abraham Accords, tweeting, "The United Arab Emirates, Bahrain and now Morocco! Today, we launched the Israel-Morocco scientific and research memorandum of understanding. I’m honored to take another historic step with Minister Miraoui. Our countries have great potential to collaborate on issues of energy-tech, agri-tech and more. "

The minister’s office told Al-Monitor that a few months ago, the minister signed an agreement in the field of space with the UAE and a technology agreement with Bahrain. "The agreement with Morocco marks another significant step in reinforcing ties with Arab states. Morocco faces great challenges and ambitious goals on water management, desalination of water, renewable energies, smart agriculture and climate. Israel’s high-tech industry has a lot to offer Morocco in these areas. It’s a great opportunity to connect the two peoples and reinforces both economies," said the ministry.

The minister arrived in Morocco yesterday to participate at the conclusion of a three-day conference that took place in Casablanca titled “Connect to Innovate.” The conference was organized by the nonprofit organization Start-Up Nation Central and focused on connecting Israeli and Moroccan high-tech businesspeople. Hailing the rekindled diplomatic relations between the two countries, Farkash-Hacohen noted at the conclusion of the conference, “This is a special event. It has been only 18 months since we signed and reestablished the diplomatic relationship with the kingdom of Morocco. While governments sign treaties, people are the ones who are actually building peace.”

President Isaac Herzog, currently in Davos, sent the conference a recorded message, saying that “together Israel and Morocco can develop innovative solutions that will improve lives, livelihoods and quality of life in our own countries and promote progress and peace throughout the Middle East, Africa and beyond."

Israel’s Ambassador to Morocco David Govrin, together with his team, has been extremely instrumental is reaching the bilateral agreement signed today. A quick look at his Twitter account reveals an impressive extent of activities on connecting Israelis and Moroccans in fields of economy, higher education, health and much more.

The embassy’s spokesperson, Eyal David, told Al-Monitor that the ambiance at the UMO signing was festive and warm. “Clearly there was true chemistry between the two ministers, who pledged to deepen cooperation between Rabat and Jerusalem. Both of them are committed to take normalization between our two countries to the next level, to translate the peace treaty into real connections between people, not just governments. Morocco is keen on creating links between the industries on both sides and between the civil societies, and so are we.’’

David said that Farkash-Hacohen invited her Moroccan counterpart to visit Israel. Miraoui signaled that he would like to arrive to Israel with a delegation of heads of Moroccan universities, a visit that could take place in the very near future.