Israel and the United Arab Emirates signed an agreement in Dubai to cooperate on space missions, including collaboration on the Israeli Beresheet 2 lunar project. 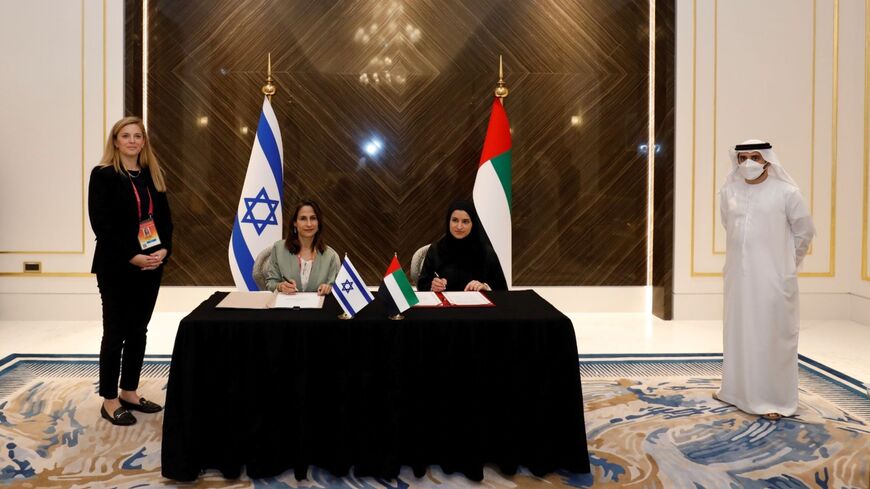 Israel’s minister of innovation, science and technology, Orit Farkash Hacohen, and the UAE's minister for advanced rechnology, Sarah bint Yousef Al Amiri, sign the memorandum for the two nations to cooperate in space on Oct. 20. - AFP via Getty Images

Israel and the United Arab Emirates agreed Oct. 20 to cooperate on space missions. The Emirati Space Agency signed a memorandum of understanding with the Israel Space Agency to enhance cooperation in scientific research and space exploration.

The deal, finalized at the 2020 Dubai Expo, includes collaboration on the Israeli Beresheet 2 space project bound for the moon in 2024. Israeli and Emirati students will work together to design a new satellite tracking the moon. The Beresheet 2 spacecraft will carry that satellite, which should help those following the Hebrew and Muslim calendars to determine the precise time of the new moon. The two countries will also work together on data-based development and research from the Israeli-French satellite Venus.

Israel’s Minister of Innovation, Science and Technology Orit Farkash-Hacohen said at the signing ceremony, "Governments sign agreements, but people and collaborations are the ones that truly make peace. … I am pleased to sign a series of agreements for cooperation with the UAE Space Agency in important and groundbreaking fields. I thank the Minister of Advanced Technology Sarah Al Amiri for the significant, collaborative work done in the last year between the two agencies."

After the ceremony, Farkash Hacohen tweeted, "Today we presented Israel with important news - a cooperation agreement between the Israeli and Emirati space agencies. I am now looking forward to see both Israeli and Emirati flags flying over future joint projects; working on Beresheet 2, the Venus satellite, groundbreaking research and connection between peoples. From now on, we are turning towards the stars and beyond."

Israel’s Beresheet 1 project, its first lunar mission, crashed into the moon’s surface in April 2019 during its attempt to land. Shortly after the crash, SpaceIL and Israel Aerospace Industries, which developed the prototype, decided to embark on a second lunar mission, alongside the Israel Space Agency and several Jewish philanthropists.

The Israel Space Agency is also involved, together with the Israeli Ramon Foundation, in the mission of the private space tourism company Axiom Space, to fly Israel Defense Force pilot Eytan Stibbe to the International Space Station. Stibbe will be the second Israeli astronaut ever, after Ilan Ramon, who died on the Columbia space shuttle when it exploded.

With these projects, Israel and the Emirates constitute the two most space-advanced nations in the Middle East.

The ambitious Beresheet 2 project will include a mothership that will be launched into space, from which two very small landers will detach, to reach two separate landing points on the surface of the moon. One craft should land on the far side of the moon. The landing point of the second craft has not been determined yet. Still, the double landing should be a first in the history of lunar crafts.