The funding sources for Israel's ambitious Beresheet 2 have not been divulged, but there are hints that the United Arab Emirates may well be teaming up with Israel on a moon landing. 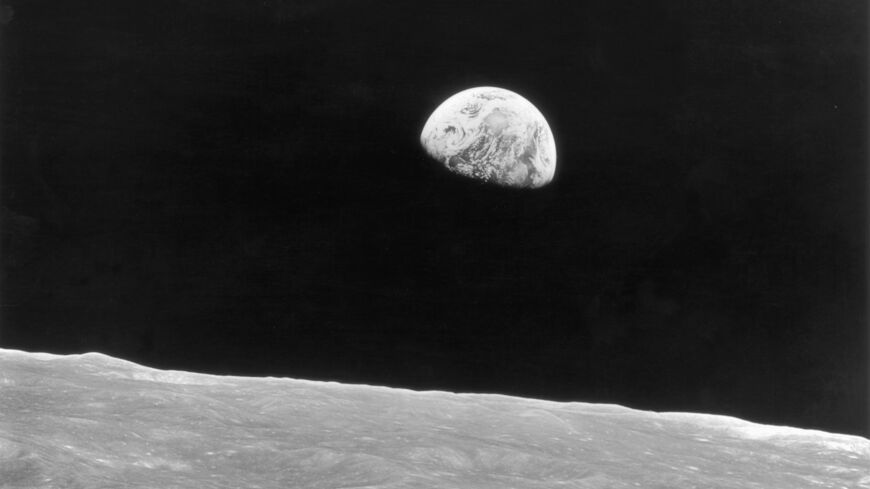 Earth rises above the horizon of the moon, as seen by the crew of the Apollo 8 mission, Dec. 1968. - Keystone/Hulton Archive/Getty Images

As a country that takes great pride in its reputation as a “startup nation,” Israel is eager to join the exclusive club of nations with major projects in outer space. It wants to send spacecraft to do research in space and conduct exploratory missions across the solar system, not only to the moon but to the planets as well.

The chances of such projects happening would increase exponentially if it succeeds in convincing the United Arab Emirates to join its Beresheet 2 project to send a research craft to the moon. It would also provide a major boost to cooperation between the two countries, already strengthened  since the signing of the Abraham Accords.

The Beresheet 2 project was initiated by SpaceIL, a nonprofit association founded by businessman philanthropist Morris Kahn, founder of Amdocs, which provides customer management and billing software for large telecom companies. The first Beresheet (Hebrew for “Genesis”) spacecraft was built at the Israel Aircraft Industries’ facilities with the support of the Ministry of Science and Technology’s own Israel Space Agency. At just 1.5 meters in height and with a diameter of 2 meters and a total mass of 600 kg, it is the smallest spacecraft ever designed for a lunar landing.

The original Beresheet spacecraft was launched successfully in the spring of 2019, but contact with it was lost during its lunar landing attempt. It was soon learned that the spacecraft crashed. Two days later, Kahn announced that he planned to go ahead with his Beresheet 2 project, work on which began in December 2020.

The Israel Space Agency and SpaceIL say that after evaluation of past experiences, they have decided to take a new approach to the current project. They have determined, for example, that Beresheet 2 will include three parts: an orbiter and two landing capsules. The landers are expected to set down on two different lunar landing sites and conduct scientific experiments there. The orbiter will circle the moon for several years while conducting experiments of its own. It's scheduled to launch in 2024.

If the mission is successful, it will achieve a double landing on the moon in a single mission and a landing on the far side of the moon, where only China has succeeded in landing. In addition, the landing craft will be the smallest spacecraft ever sent into space (each craft will weigh 120 kg with fuel and 60 kg without). The mothership is designed for a five-year mission, during which it will serve as a scientific educational platform for Israel and other countries. Students will be able to connect to the spacecraft and participate in research in deep space.

On July 11, Beresheet 2 took a major step forward when SpaceIL announced that it had received a donation of $70 million, well over half the project’s estimated cost of $100 million. Another $5 million had been raised earlier from research and investment funds and Israeli and international donors, including American-British businessman Len Blavatnik and the XPrize Foundation, Fred and Sima Simon (among the founders of JFrog), Mini-Circuits, Inc. (which supported the Beresheet 1 project too), Orbs, the Julio Family Foundation and others.

In 2019, then-Science Minister Ofir Akunis promised that the government would give 20 million shekels ($6 million) in grants to the Beresheet project. It is not yet known if the current government will meet this promise, but the amount collected so far makes it possible for the project to proceed regardless.

The source of the $70 million grant was never shared. Nevertheless, there are some hints, including that donations of this size do not usually come from individual philanthropists.

When work on the Beresheet 2 project began in 2020, the Israel Space Agency released an announcement hinting at the identities of the donors. It said, “Right now, there are talks with sources of funding in different countries, including one very important country, which committed itself to giving tens of millions of dollars to the project.” Science Minister Yizhar Shay also said, “We are pleased to announce that in conversations with the Israeli Space Agency, seven countries from five continents have expressed an interest in participating in the project," and "In conversations with the United Arab Emirates, the subject has been raised several times.”

Morris Kahn gave a talk to the Global Investors Forum sponsored by the Jerusalem Post and Dubai’s Khaleej Times. In it, he called on Israel and the United Arab Emirates to work together to create a joint space program, saying, “I can’t think of anything better. It would be wonderful if we could develop a space program that involves a cooperative venture by Israel and the Arab world. I would be especially pleased if this suits the Emirate’s plans, and they have ambitious plans.”

Notably, the UAE has already sent its spacecraft al-Amal (“Hope”) to Mars. In February, it began sending back photos of the red planet taken from orbit. It was a difficult mission in deep space, comparable in magnitude to those of space superpowers like the United States and China, and it was very successful.

Further evidence that the UAE is involved in the project can be found in a statement by the Emirates committing itself to investing $10 billion in Israel as of March. The announcement by the UAE government said one particular area of investment will be space exploration.

It is entirely possible that by 2024, Israel, with the help of the United Arab Emirates, will enter the pantheon of nations pushing past their terrestrial frontiers to explore space.