Israelis not giving up on moon mission

Despite the crash of the Israeli spacecraft Beresheet on the surface of the moon, young Israelis feel inspired. 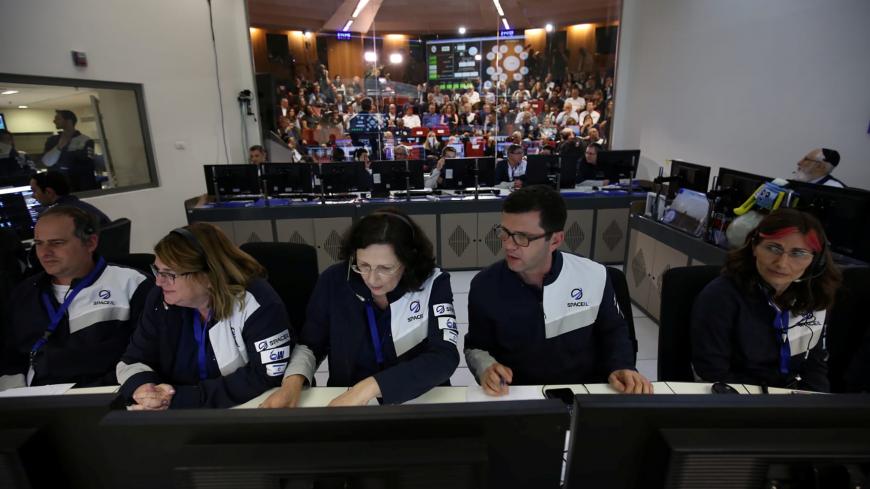 Members of the Israeli spacecraft, Beresheet, are seen in the control room in Yahud, Israel, April 11, 2019. - Courtesy Space IL/Handout via REUTERS

Two days after Israel's tumultuous and divisive April 9 elections, something united Israeli citizens: the shared hope that the Israeli spacecraft Beresheet would successfully land on the moon. Close to 10 p.m., an entire nation held its breath while watching television, which carried the moon landing live. But at a critical moment, an unanticipated failure caused the spacecraft to crash. After four suspenseful minutes, the mission’s directors announced that Beresheet had crashed on the moon. The mission, as defined at the start of the project, failed.

Besides the project’s staff, who had toiled for many years, those who were especially disappointed were Israeli children, thousands of whom had followed the launch of the craft. Some of them came to President Reuven Rivlin’s residence to watch the landing, and expected to celebrate the successful mission with him. Yoav Edelstein, 8, from Modiin-Maccabim-Reut, came with his mother Yael. “We built a special model of Beresheet on the moon out of cardboard, and we planned to present it to the guests at the event at the president’s residence after the successful landing,” the mother told Al-Monitor. “When we saw that the landing failed, my son decided to leave the model in the bag. While the president encouraged us, the atmosphere was less festive. It didn’t seem right to present the model.”

Aside from Beresheet’s scientific mission, the project’s founders also had an educational vision: to inspire the younger generation to study science, technology, engineering and math. It seems that they succeeded in this mission.

“The spacecraft’s launch had a huge effect on students," Merav Sharon-Greidinger, the science coordinator at the Ilanot school in Haifa, told Al-Monitor. "I see third graders sitting rapt for any information on the spacecraft. It lights up their imagination. It lights up their curiosity. After the crash it was indeed a big disappointment, but we encouraged them and told them that the very achievement of reaching the moon, despite the failed landing, was important.”

Yitzhak Ben Israel, the head of the Israel Space Agency, doesn’t see the crash as a failure. “From a scientific-engineering standpoint it didn’t fail," he told Al-Monitor. "The reason for the failure was human error. One of the engineers pressed a button that he shouldn’t have pressed. Clearly it would have made everyone happier had the spacecraft now been sitting whole on the moon. But the public also understands that reaching the moon’s orbit, and the fact that an Israeli craft made it to the moon, are enormous technological achievements.”

Ben Israel believes that Israelis are inspired to pursue space-related endeavors. “I receive thousands of queries on Facebook, WhatsApp and email from children and parents regarding Beresheet," he said. "Whoever comes to meet with me brings his kid so he can ask me a question on the topic. Beresheet ignited the curiosity of Israeli children, so in this respect the mission was a huge success. Now all we need is for the educational system to leverage this curiosity in the right direction.”

According to Sharon-Greidinger, the failed landing has an important educational lesson. “When you fail it teaches you that you still have something to learn, something to improve," she said. "It’s the basic principle of science and a basic principle of education. We want to teach our kids to continue trying, in every aspect of life, despite failure. To learn from our mistakes — and fix them. In a certain respect there’s a more important message here than if the landing would have succeeded the first time. The fact that Beresheet 2 was announced immediately after [the crash] gave a very important message.”

Indeed, two days after the crash, billionaire philanthropist Morris Kahn, the initiative’s main funder, announced Beresheet 2, a spacecraft that would be launched in two years and would try to land on the moon. The estimated costs are between $60 million to $80 million. “Beresheet 2 is now only at the stage where they’ve decided to build it,” Ben Israel said. “Beresheet 2 would be very similar to Beresheet 1, since it has been proven that the craft that was built, if not for the mistake that was made, would have landed on the moon. But this time it would be cheaper and another component would be added. It will be another scientific-technological mission that would draw our youths' attention.”

A Ministry of Culture committee decided April 15 that Kahn and Kfir Damari, the founders of the company that developed the Beresheet space probe, would light a torch at the upcoming Independence Day ceremony May 9. “Beresheet brought Israel into the small club of seven nations that have succeeded in launching a spacecraft into the moon’s orbit," the committee stated. "The achievement of the project’s directors demanded creative engineering, entrepreneurship and out-of-the-box management, and they are an honor to the State of Israel. Beresheet’s activity has inspired many Israelis and proven to Israeli scientists, inventors and thinkers that the sky is not the limit and that nothing stands in the way of one’s will.”

Ben Israel believes the lighting of the torch is another push forward for the scientific ambition they have inspired. “In order to build a society based on scientific knowledge and technology, we need role models for our youth to imitate," he said. "Instead of these role models being starlets from the television show 'Big Brother,' who talk nonsense on camera, our role models should be pioneers who worked hard and achieved exceptional scientific progress despite the odds.”