Israelis and Emiratis throw themselves into their new relationship and Palestinians are throwing Gulf visitors out of Al-Aqsa Mosque. 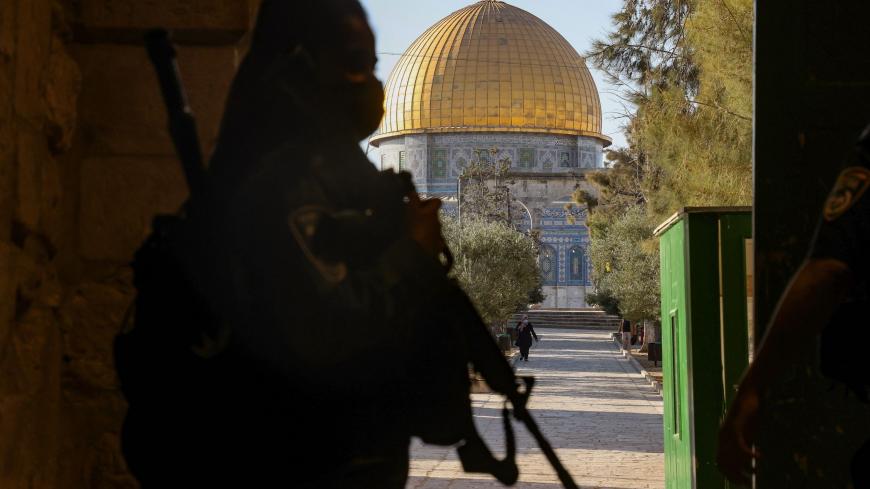 An Israeli policewoman stands guard at an entrance of the Al-Aqsa compound, leading to the Dome of the Rock mosque in the Old City of Jerusalem on Oct. 18, 2020. - EMMANUEL DUNAND/AFP via Getty Images

A new normal is taking form in Israel and the occupied territories following the signing of the Abraham Accords last month.

This unfolding state of affairs includes Israelis energized by the prospects of peace, friendship and business ties with the United Arab Emirates and the Gulf; Arab citizens with anxious and mixed feelings; and Palestinians angry enough to harass Gulf visitors at the Al-Aqsa mosque.

And while there is still speculation on which Arab country will normalize next, post-normalization diplomacy is already underway with a proposal for an international Israeli-Palestinian peace conference gaining traction at the United Nations.

Here are five quick takes on the new normal, so far, from Al-Monitor reporters:

Among the many areas for possible collaboration are cyber warfare and security. "They are counting on us in this field,” a member of the Israeli business delegation told Caspit.

Fleur Hassan-Nahoum, the deputy mayor of Jerusalem who also recently visited the UAE, is energized by the potential for business, especially tourism, which has been lagging in both Israel and the UAE as a result of the COVID-19 pandemic, writes Mazal Mualem. Hassan-Nahoum has so far established an Israel-UAE Business Council and an Israel-Gulf Women’s Forum to advance business and person-to-person ties.

Tourism, business and otherwise, is already seeing a spike.

"Israelis have toured quite a few Arab markets and countries, including Egypt and Jordan that have forged peace with Israel, North African states (mostly Morocco) that allow Israeli tourists limited visits and Turkey (which while not Arab is a Muslim state with a regime hostile to Israel)," observes Caspit. "They have grown accustomed to speaking quietly, to hide Star of David emblems under their shirts, to play down their national identity. In Dubai, the opposite is true. Israelis can behave with their customary loudness, walk around with their heads held high and take pride in their origins."

Once there are daily flights from Israel to the UAE, Caspit writes, "Emiratis will surely experience a so-called baptism by fire, with an onslaught of Israeli tourists who have made a dubious name for themselves around the world."

Israeli Prime Minister Benjamin Netanyahu is planning his own celebratory trip to the UAE and has reportedly instructed government ministers not to go before he does. "Contrary to many past events, this time Netanyahu has earned the credit," Caspit concludes.

Only 13 Knesset members opposed the ratification of the Abraham Accords, and all were from the Joint List. (The final total: 80 voted yes, 27 were absent and 13 were opposed).

The position of the Joint List may be misleading, Afif Abu Much reports, because Israel’s Arab citizens are not uniformly opposed to normalization.

"Opinions in the Arab public are divided on the issue," he writes. "Some Arab-Israelis oppose normalization without first resolving the Palestinian issue out of fear that it will perpetuate the occupation and stop the creation of a Palestinian state in the foreseeable future. But there is also a significant number of Arab-Israelis who support the agreement, believing that it will afford them an opportunity to build bridges and establish ties with the Arab world, something that has been denied them until now because of their Israeli citizenship and passports."

"The irony," Abu Much continues, is that the vote took place "just as Arab-Israeli soccer player Dia Saba made history by playing in the opening minutes of the game for Al-Nasr Dubai. Saba would never have been signed by the team were it not for the normalization agreement."

At the heart of these shifting sentiments is the Joint List, the coalition of Arab representatives in the Knesset. The Abraham Accords may have further distanced some Arab-Israelis from support for the List and encouraged the trend toward a new political grouping of Arabs and Jews.

"Anyone who keeps tabs on Arab society in Israel will know that many Arab voters are looking for a political home that is not the Joint List," Abu Much writes. "They consider the party to be an increasingly exclusive club. They feel — as I explained in an earlier article — that the party is inaccessible to ‘outsiders,’ [that is] any Arab who wants to run for Knesset, but is not a member of one of the four factions that compose the party. That may explain why the Arab electorate is often more dedicated to voting against Prime Minister Benjamin Netanyahu than for the Joint List. … On the other hand, the Jewish center-left is becoming increasingly repulsive to the Arab population after years of dissociating from potential Arab constituents, taking Arab society for granted and rejecting them whenever they reached out."

Meanwhile, two groups of Emirati visitors were asked to leave Jerusalem’s Al-Aqsa mosque this month. At least one of the groups entered from the Israeli gate, with Israeli police escort, prompting Palestinian Prime Minister Mohammad Shtayyeh to say, “Entering Al-Aqsa must take place via the gate of its owners, and not through the occupation.”

The Islamic Waqf, which manages the affairs of the compound, considers visits by Arab Gulf groups potentially incendiary, fearing these incidents could escalate. Palestinian Jerusalemites and the Mourabitoun of Al-Aqsa have harassed Gulf visitors and tried to force them to leave, Ahmed Melhem reports.

There is growing traction for an international peace conference under UN auspices early next year, writes Daoud Kuttab.

Riyad Mansour, permanent observer of Palestine to the United Nations, said in an exclusive interview with Al-Monitor that the UN Security Council seems poised to back such a conference, praising the Russian role.

US Ambassador to the UN Kelly Craft said the United States had "no objections" to a conference but was skeptical it would be productive.

“He will not do anything until the US elections results are known, but it is clear that he will play a big role once this picture is clear,” Mansour said. “Expect to see a much more active role by the secretary-general if [Democratic candidate Joe] Biden wins the American election.”

Kuwait, which has been a strong supporter of Palestinian peace efforts and has so far resisted normalization, will chair the Security Council in January. Mansour sees it as another opportunity.

“Almost all countries of the world, including the recent normalizers and the potential normalizers, are all in strong support of [Palestinian] President [Mahmoud] Abbas’ call for an international conference for peace,” he told Kurrab.

Hovering metaphorically over the Abraham Accords has been the US F-35 fighter aircraft.

The White House notified Congress this week of a proposed sale of F-35s to the UAE. The notification follows meetings Thursday by US Defense Secretary Mark Esper with Netanyahu and Defense Minister Benny Gantz in Israel, Jared Szuba reports.

The F-35 was one of the sideshows of the Abraham Accords, writes Rina Bassist, and it took three meetings between Esper and Gantz over the past month to come to an understanding on the issue.

Because the United States has a long-standing agreement to maintain Israel’s qualitative military edge, there was initially a bit of a firestorm in Israel that Netanyahu signed off on the US F-35 sale to the UAE as part of the normalization agreement, which didn’t go down well with Gantz and others who feared a sale could compromise Israel's military advantage. The news dimmed the overwhelming popularity of the accords in Israel and the United States ultimately had to step in. Last week in Washington, Gantz and Esper signed a deal reaffirming the US commitment to Israel’s military superiority, a "major leap forward" in US-Israel security ties, according to Gantz. Netanyahu and Gantz then released a joint statement that Israel will not oppose the sale of "certain weapons systems," presumably the F-35, to the UAE.