Lawmakers have introduced legislation intended to ensure the sale does not eclipse Israel's regional military edge. 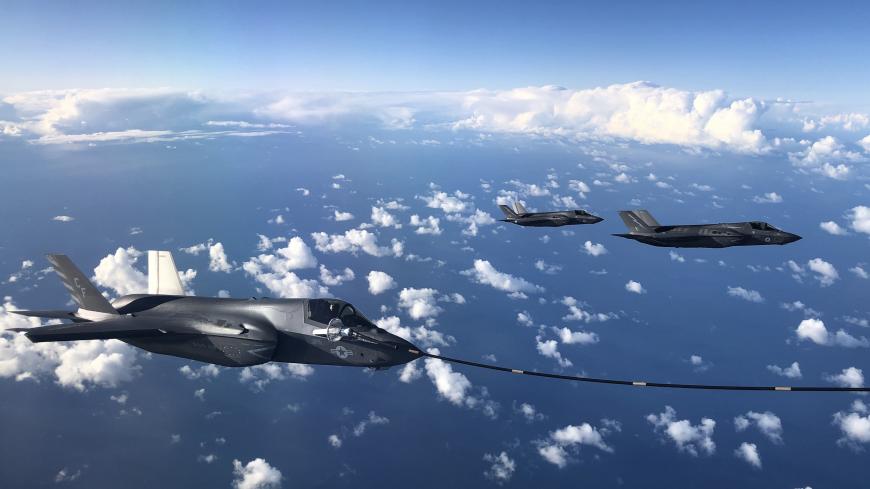 An F-35B combat aircraft from the United States Marine Corps refuels from an RAF Voyager aircraft over the North Sea on Oct. 8, 2020 in flight, above Scotland. - Leon Neal/Getty Images

The administration of President Donald Trump has formally notified Congress of a proposed sale of the F-35 combat aircraft to the United Arab Emirates.

Last week in Washington, Esper and Gantz signed a joint declaration that the Israeli defense chief said would cement Israel’s regional military advantage “for decades to come.” Details of the agreement were not made public.

Amid the discussions, Netanyahu and Gantz’ offices announced last week that the Israeli government would not oppose certain US weapons sales to the UAE. A US official confirmed yesterday that the announcement was in reference to the F-35.

The Trump administration has embarked on a last-minute initiative to convince regional countries to recognize Israel. So far the UAE and Bahrain have signed normalization agreements, while Sudan has indicated it has plans to normalize ties with Israel.

Why it matters:  If the controversial proposal is approved by lawmakers, the UAE could become the fifteenth country set to obtain the highly advanced stealth aircraft. But there are significant concerns, particularly among Democrats in Congress.

“This technology would significantly change the military balance in the Gulf and affect Israel’s military edge,” chairman of the House Foreign Affairs Committee Rep. Eliot Engel (D-NY) said on Thursday.

“The export of this aircraft requires very careful consideration and Congress must analyze all of the ramifications. Rushing these sales is not in anyone’s interest.”

Israel is the only country in the Middle East to possess the F-35. The aircraft is slated to serve as the primary fighter aircraft platform of the United States and its allies for years to come. Its stealth technology is highly sensitive and could be compromised if it falls into the hands of US adversaries.

Engel suggested Thursday that for the proposal to pass, the administration will have to provide “unimpeachable assurances” that sales of the F-35 to the UAE would not risk China or Russia obtaining its technology.

Qatar has also reportedly requested the F-35, raising questions as to whether the Trump administration’s ambitions of bolstering regional military cooperation via the Abraham Accords in order to deter Iran may lead to an influx of advanced American weapons into the region.

The Abraham Accords initiative comes as the United States' strategic relationship with NATO ally Turkey is increasingly strained. Turkey was kicked out of the F-35 program last year after purchasing Russia’s S-400 missile defense system, which it test-fired earlier this month, despite Washington’s continued warnings of potential economic sanctions.

What’s next:  R. Clarke Cooper, head of the State Department’s Bureau of Political-Military Affairs, suggested Thursday that the administration would continue to seek Congress’ approval for weapons sales to the region. That stands in contrast to an earlier controversial move by Secretary of State Mike Pompeo, who authorized certain arms sales to Saudi Arabia and the UAE via an emergency exception to a congressional freeze on such sales.

Lawmakers have responded to news of the administration’s F-35 sale proposal by pushing legislation designed to ensure Israel’s relative military superiority is upheld in the region.

On Thursday, Engel invited lawmakers to introduce further legislation to ensure future advanced arms sales to the Middle East do not undermine US interests.

Know more:  Metin Gurcan lays out what to watch for as Turkey crosses the line with its S-400s.