The exposure of the clandestine affair between Israel and the United Arab Emirates creates a substantive change in the Middle East. 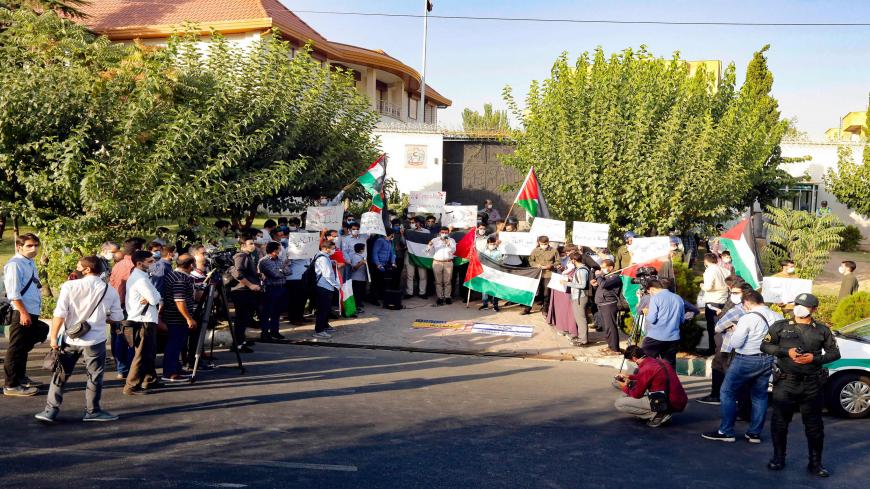 Iranian students wave Palestinian flags and hold banners during a protest against a US-brokered deal between Israel and the United Arab Emirates to normalize relations, in front of the UAE Embassy in the capital Tehran, Aug. 15 2020. - AFP via Getty Images

The Israeli-Arab conflict was dominated for decades by an unassailable, clear paradigm: Arab states would never normalize ties with Israel, nor recognize it or conduct any kind of public relationship with it as long as the Israeli-Palestinian conflict was unresolved, or at least significant progress was made toward resolving it. Even the Saudi peace proposal, which morphed into the 2002 Arab Peace Initiative, clearly stipulated this precondition. You will only reap the rewards of normal ties with the Arab world once you recognize this initiative as the basis for negotiations, the Arab League has been telling Israel ever since. Israel never formally responded to the initiative. In 2009, the Saudis, for their part, flat-out dismissed US President Barack Obama’s request for a symbolic goodwill gesture toward Israel of allowing Israeli passenger planes to overfly Saudi airspace on their way to India. This week, according to Israeli sources, Saudi Arabia expressed willingness to permit Israeli overflights en route from Tel Aviv to Abu Dhabi and Dubai.

What has changed since? Has this paradigm been shattered and buried? All indications are that it has, indeed. Not only are the Emirates about to sign a deal establishing official ties with Israel, they are proud of their decision. Not only is the Arab world not condemning the move, many countries are praising it. And in the United Arab Emirates (UAE), rather than griping about the regime’s move, residents are enthusiastic.

As for Israel, not only is it no longer being boycotted and punished as the neighborhood bully, it is now the belle of the ball. Everyone is courting it, trying to catch Israel’s attention, sample the delights of its abundant high-tech, weapons systems, cyber and intelligence capabilities, and, most importantly enjoy the benefits of the White House keys, which Prime Minister Benjamin Netanyahu keeps close to his chest. In Arab capitals, from the Persian Gulf to the Maghreb, Mossad Chief Yossi Cohen with his 1950s Hollywood-star looks is a prestigious guest. Until now, his visits there were shrouded by heavy censorship. On Aug. 17, he appeared publicly in the Emirates for the first time, not as a jilted lover but as a charming prince openly expressing his feelings for his beloved.

Nonetheless, a caveat is in order. Contrary to the spins that Netanyahu’s people are putting out, the agreement with the UAE — which is not a peace agreement since the countries were never at war — is not really the first time Israel achieves “peace in return for peace.” Netanyahu is boasting of his breakthrough in negating the principle of “land for peace” so despised by the political right, but his claims are hollow. He paid for the agreement with hard currency by having to give up his US-sanctioned dream of annexing lands in the West Bank.

This is a significant strategic concession. Netanyahu and his right-wing allies were already poised at the entrance to Aladdin’s cave and all its riches, prepared for the historic move of imposing Israeli sovereignty over extensive lands considered the cradle of Jewish history — only to have the door slammed in their face.

Not only that. According to US President Donald Trump’s close adviser Jared Kushner, Netanyahu has committed himself to the two-state solution for Israeli-Palestinian peace and to negotiations “based on a map.” Here too, the concessions are significant — and the cherry on the cake: The United States has reportedly agreed to lift its veto over the sale of smart weapons systems to the UAE in light of the deal with Israel. The United States has thus far banned the sale of such weapons and technologies to most Arab states, inter alia so as not to undermine the principle of preserving Israel’s qualitative edge. While Netanyahu’s office is denying any Israeli involvement in this alleged dramatic US policy shift, there is little doubt that it gave its tacit approval.

Having said all of the above, there is no doubt that exposure of the clandestine affair between Israel and the UAE creates a substantive change in the Middle East. The affair has been in the works for the past five years — ever since the UAE allowed Israel to open an office at the International Renewable Energy Agency based in Abu Dhabi in 2015. It flew under the radar at growing speed. It gradually took shape with more and more deals and openings, but always in the cupboard. Ties with Israel were gradually evolving from burden to benefit, with the load easing as the assets grew. The reason was tangible and threatening: Iran. The closer Iran moved to nuclear capability, the faster this process evolved. The greater Iran’s involvement in “spreading the revolution” by encouraging terrorism and undermining the region’s regimes, the relationship with the Jewish state advanced. The more the United States withdrew from the Middle East and removed its influence over its crazies, so Israel remained the only anti-Iran bastion of stability.

The first significant burst of adrenalin was provided by the 2014 agreement between world powers and Iran seeking to curtail its nuclear ambitions. For Riyadh, Abu Dhabi, Kuwait and many other regional capitals, the deal was poisonous. Israel was perceived as the only country on which these threatened Sunni states could truly rely. As the Israel-Iran struggle intensified on its various fronts, many states in the region came to realize that it was out with the old guard and in with the map of realigning interests. No longer was the world aligned against Israel and the United States. The forces had rearranged themselves: Iran on one side, Israel on the other. Many Sunni states that feel threatened by Iran’s encroachment are sheltering behind Israel’s broad back. The Iranian side is left with Hezbollah — which is dragging Lebanon into this Shiite morass — and Turkey. Qatar is on the fence, skipping between the sides. Egypt, perhaps the most significant Arab power to have threatened Israel for decades, is currently firmly entrenched on the Israeli side. In fact, the greatest threat to the regime in Cairo is the Muslim Brotherhood, a Hamas sister party backed by Iran. And the Palestinians? The Arab world has simply lost interest.

None of this would have happened had Israel not been a bottomless pit of priceless technology, creativity, initiative, and cyber and intelligence capabilities. Urban legend has it that Israel’s Mossad saved the late King Hussein of Jordan from some nine assassination attempts. The story is apparently true, attesting to Israel’s skillful use of its intelligence assets to hook its neighbors on this hot merchandize. The same goes for Israel’s vaunted cyber and high-tech capacity. Israeli business people and high-tech firms, both small and large, have been making billions in recent years in deals with Gulf states. Both sides hope that this covert trade will emerge into the open now. Israel and the Sunni world are abandoning the black market and launching a public offering of their romance on global markets. Indeed, a dramatic change although here, too, a caveat is in order: In the Middle East, as in the Middle East, everything can be turned on its head.