The Takeaway: Netanyahu expects ‘warm peace’ with UAE to extend to other Arab states 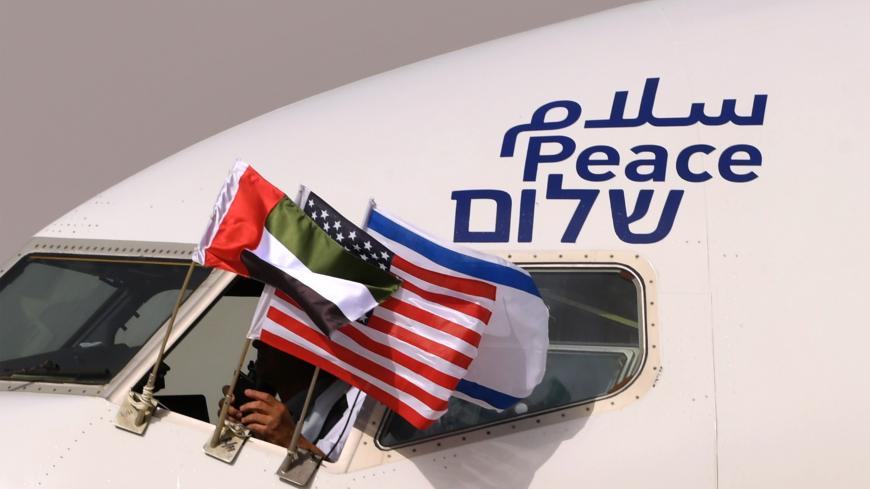 The Emirati, Israeli and US flags are picture attached to an air-plane of Israel's El Al, adorned with the word "peace" in Arabic, English and Hebrew, upon it's arrival at the Abu Dhabi airport in the first-ever commercial flight from Israel to the UAE, on Aug. 31, 2020. - KARIM SAHIB/AFP via Getty Images

A ‘warm peace’ based on economy, investment

Israeli Prime Minister Benjamin Netanyahu said on Sept. 1 that the diplomatic normalization agreement with the UAE will “be a warm peace, because it is based on economic cooperation with an entrepreneurial economy similar to ours, with very great economic abilities and considerable funds that is also looking for investment horizons.”

Israel and the United Arab Emirates have already set up a committee to collaborate on financial services and investments and are discussing establishing embassies.

The arrival of US and Israeli delegations to the UAE on a direct flight from Israel was a powerful start to the new relationship. According to the Aug. 31 US-UAE-Israel joint statement, Emirati and Israeli officials are discussing cooperation in “investment, finance, health, the civilian space program, civil aviation, foreign policy and diplomatic affairs, tourism and culture.”

'More than you think’

Netanyahu sees the breakthrough with the UAE as just a start. “I have met with very, very many leaders in the Arab and Islamic worlds, many more than you think,” he said. “But this is a peace that will facilitate direct and unmediated meetings between citizens of Israel and the populations of those states.”

Last week US Secretary of State Mike Pompeo visited Sudan, Oman, Bahrain and the UAE to line up others to follow the UAE’s lead, and White House senior adviser Jared Kushner is in the region this week.

Mazal Mualem writes that Mossad director Yossi Cohen is “the uncontested architect of the regional peace initiative,” adding that Netanyahu “consults with him on a regular basis and relies on him to get things done” and may even consider Cohen as one of two possible successors.

“Netanyahu has been saying behind closed doors that there are two people he considers fit to lead the State of Israel: Yossi Cohen and Israeli Ambassador to Washington Ron Dermer,” writes Mualem.

Ben Caspit has the scoop here on an Israeli regional peace project initiated by Israeli opposition leader Isaac Herzog four years ago that included quiet back channel talks with the United States, Egypt, the UAE and the Palestinians. But it all collapsed when Netanyahu and Herzog could not reach agreement on unity between their parties.

The UAE has made clear that the peace deal with Israel is a ‘strategic necessity’ linked to peace in the region — and absolutely not a selling-out of the Palestinians.

Addressing the UAE’s Palestinian community, UAE Foreign Minister Abdullah bin Zayed said on Sept.1 that the "UAE’s stance will remain supportive of the Arab stand calling for establishing an independent Palestinian state with east Jerusalem as its capital. We will continue to support the Palestinian cause based on our historic stance that stems from a deeply rooted, unshakable belief that will never change as a result of any considerations. … The UAE sees peace-building as a strategic necessity for the region. However, this strategic necessity will not come at the expense of our support for the Palestinian cause and the rights of our fraternal Palestinian people."

Our take: The bet here is that the UAE, in line with its regional posture, will remain active in promoting Israel-Palestinian talks based on the 2002 Arab Peace Initiative, which calls for a Palestinian state. The Emirates has been clear from the start that normalization came about only because Netanyahu agreed to hold off on annexation of Jewish settlements in the West Bank. Bin Zayed’s statement is just the latest reaffirmation of the UAE’s commitment to negotiations toward a two-state solution — see the Israeli digital media platform ynet’s column last month by UAE Ambassador to the United States Yousef Al-Otaiba. A strong position backing the Palestinians is vital for Arab support for the UAE’s courageous step. By the way, the UAE line on Palestinian statehood is the same one taken by both Egypt and Jordan in their peace agreements with Israel.

Read more: Daoud Kuttab has the take here on the reaction of Palestinian leaders to the deal.

What a contrast. As Israelis were being warmly received by Emiratis to launch a new era of peace, Iran’s Supreme Leader Ayatollah Ali Khamenei weighed in with vitriol — and a whiff of anti-Semitism.

An Iranian Foreign Ministry statement on Aug. 14 also didn’t hold back: “The Islamic Republic of Iran considers Abu Dhabi’s shameful move to normalize relations with the fake, illegitimate and anti-humane Zionist regime as a dangerous measure, warns against any interference by the Zionist regime in the Persian Gulf region’s equations and declares that the Emirati government and the other governments siding with it must accept responsibility for all the consequences of this move.”

Iranian women are increasingly speaking out against harassment and rape in Iran. While the official Iranian media ignores the issue, there has been increased public awareness of it amid the arrest of a prominent bookshop owner who was accused of rape by several women.

Nonetheless, women remain reluctant to make their case in a system where their testimony is given less weight than that of a man, the judges are all men and the definition of rape itself is muddled.

The meanings of ‘zena’

Leila Alikarami explains the hurdles to accountability for rape crimes:

“Under Iran’s penal code, most sexual crimes extend from the crime of ‘zena,’ which covers adultery and premarital fornication between a man and a woman. Under zena, both parties are engaged in a criminal act. Rape is not a standalone crime in the penal code. Instead, rape is classified as zena “by force” that is done without the consent of the victim. In other words, the line between zena, where both parties are criminally liable, and zena by force, where only the assailant is liable, is a thin one. And if the element of ‘force’ can’t be established, then a victim could be seen as a criminal.”

In addition, Iran’s Criminal Procedure Code doesn’t allow investigations into zena or moral crimes, so the cases often come down to he said, she said.

The Egyptian government is investing in ‘New Alamein City’ at the site of a decisive World War II battle on the northern coast near Libya as a resort destination that the project’s enthusiasts believe could rival Sharm Al-Sheikh, sited in the south on the Red Sea. Alamein is one of the government’s “new cities” envisioned as a means to redistribute Egypt’s population of 100 million to alleviate the population density in Cairo and other cities. New Alamein is expected to be able to house 6 million people. Read the article by Amr Eman here.

After a seven-year absence, Michael O’Hanlon and Sam Gollob have resumed the Brookings Institution Iraq Index, a go-to one stop shop for statistics dealing with reconstruction and security in Iraq. Worth the bookmark. Check it out here.