Moscow is busily promoting its COVID-19 vaccine in Egypt, which it hopes to recruit for testing and production purposes. 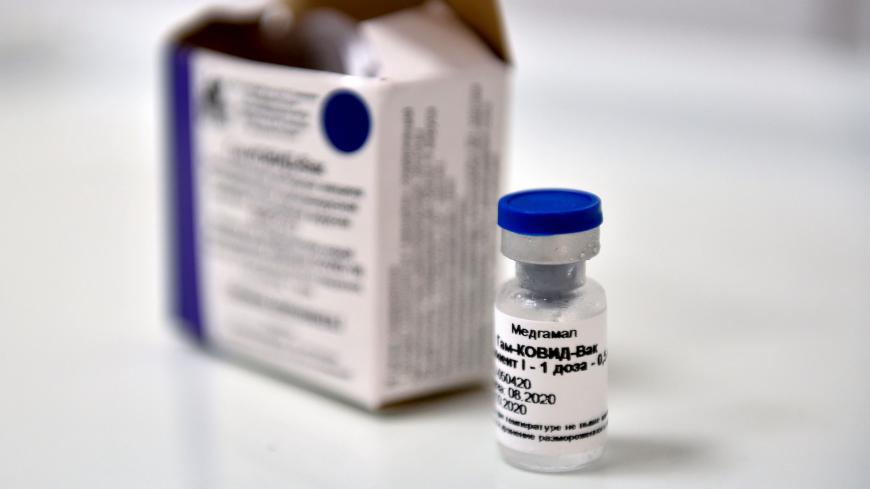 A vial with Russia's new coronavirus vaccine is seen prior to a vaccination of a volunteer in a post-registration trials, Moscow, Sept. 10, 2020. - NATALIA KOLESNIKOVA/AFP via Getty Images

CAIRO — Russian diplomats have been busy in Cairo, meeting with Egyptian officials and the local media to promote the so-called Sputnik V, a vaccine developed by Moscow's Gamaleya Institute — even though clinical trials have not been completed on the drug, and the Chinese seem to be spearheading the race for an agreement with Egypt.

Following only two months of testing, Russia’s President Vladimir Putin approved the drug in mid-August and the country began to market the medication as “Sputnik V, the first registered vaccine against COVID-19.”

In an Aug. 19 interview with Egypt’s state news agency MENA, Georgy Borisenko, the Russian ambassador in Cairo, said that Moscow is looking forward to “establishing a partnership” with Egypt to produce Sputnik V. Borisenko stated that he had informed the Egyptian ministries of foreign affairs and health about the possibility of holding bilateral discussions on producing the vaccine in Egypt and provided their ministers with “all the necessary information.”

The Russian diplomat said the vaccine could be a basis for further development of Egyptian-Russian relations. The trade exchange between the two countries reached $6.2 billion in 2019, “making Moscow one of the top 10 trading partners of Egypt," he underlined.

On Sept. 3, Borisenko met with the head of the state-run Arab Organization for Industrialization, Abdelmonem Altrass, to discuss the possibility of manufacturing the vaccine in Egypt. In a statement, Altrass affirmed that the vaccine will be subjected to “the clinical trials and medical tests required to ensure the safety of citizens' health.”

The Russian ambassador also met with Minister of Trade and Industry Nevin Gamea on Sept. 13, expressing Moscow's intentions to cooperate with Egypt in fighting the pandemic by possibly producing Sputnik V with Egyptian pharmaceutical companies.

Since the outbreak began, COVID-19 has caused more than 5,600 deaths in Egypt and the total infection tally has surpassed 100,000 cases, making Egypt the second most affected country in Africa.

Hospitals in Egypt have been using blood plasma from people who have recovered from the virus to treat other patients. Cairo is also conducting clinical trials on a Chinese vaccine.

Russia’s promotion of the vaccine in Egypt has been spearheaded by Kirill A. Dmitriev, the CEO of the Russian Direct Investment Fund and the man behind the financing of Sputnik V. He said in an exclusive interview on Sept. 1 with Egyptian Channel 10, “The vaccine is good news for Russia, Egypt and the entire Arab world.”

He went on, “We are currently in negotiations with Egypt to prepare the production capacities for the vaccine. Within a year, Egypt will be ready to manufacture this drug on its soil.” The official added that his country had asked Egypt to test Sputnik V and stated that the price of the Russian drug “will be much lower than any competing vaccine, whether from the United States or from other countries.”

Dmitriev noted, “There are requests for a billion doses of the vaccine, most of them from the Arab world.”

Amgad al-Haddad, head of the Department of Immunology and Allergies at Vacsera, the government-affiliated company that produces vaccines in Egypt, explained to Al-Monitor that vaccines must go through several stages before being approved. The first concerns safety and the second effectiveness, with testing on a small number of people. The third is prefabrication, in which the drug is tested on thousands of people of different races and ages in various countries. After the last phase, researchers measure the number of antibodies, the rate of effectiveness and side effects before beginning production of the vaccine.

According to Haddad, the Russian vaccine “has passed only two phases combined in a single step, and was tested on a very small number of military personnel.”

The pharmacologist added that the third stage, in which the vaccine is evaluated, is the most crucial.

Haddad said that testing of the vaccine developed by the University of Oxford was halted on Sept. 9 in the third stage after reports of serious side effects during clinical trials. “We do not doubt the Russian vaccine, but we also cannot evaluate any vaccine after passing only two stages of the long testing process,” he added.

Haddad stated that clinical trials are now being conducted on China’s coronavirus vaccine inside Vacsera, "it will be tested on several thousand Egyptians and after passing this stage it will be produced in agreement with the Chinese side," he said, without giving a specific time frame for the completion of these experiments.

Vacsera is aware of the meetings between Russian diplomats and Egyptian politicians, Haddad pointed out, but it is still unclear whether the drug will actually be produced in Egypt.

“Egypt has a great history in the pharmaceutical industry, a huge population and a distinguished location in the Middle East," Mostafa Kamel Elsayed, a professor of political science at Cairo University, told Al-Monitor. "These are all important factors for Russia to seek Egypt's participation in the distribution of the vaccine.”

“Once the success of the vaccine is proven, this will be a huge scientific and commercial victory for Moscow,” he added. “Hundreds of millions of doses of this drug will be distributed to the world, and it will surely be a benefit to any country that produces a vaccine for COVID-19, be it Russia, the United States, China or the United Kingdom,” Elsayed concluded.