Why Egypt chose Chinese COVID-19 vaccine over Russian one

As Egypt and China are set to sign an agreement for the distribution of a Chinese coronavirus vaccine, questions arise as to the efficiency of this vaccine. 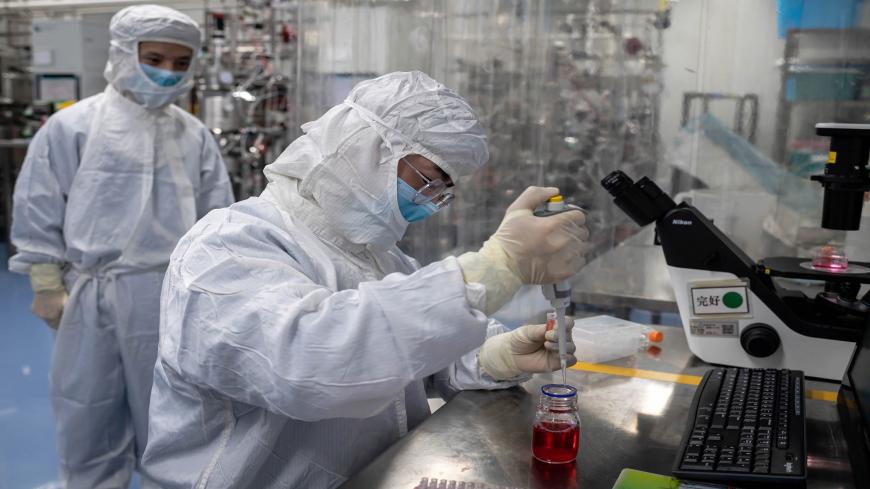 An engineer takes samples of monkey kidney cells for the testing of an experimental vaccine for the coronavirus, inside the Cells Culture Room laboratory at the Sinovac Biotech facilities in Beijing, China, April 29, 2020. - NICOLAS ASFOURI/AFP via Getty Images

CAIRO — The Egyptian government is expected to sign an agreement with its Chinese counterpart later this month for the distribution within four months of a Chinese coronavirus vaccine that is now in its final development stages.

Egypt has ignored Russian calls for a partnership to produce another coronavirus vaccine. On Aug. 11, Russia became the first country in the world to announce the approval of a COVID-19 vaccine.

The Egyptian Ministry of Health announced in an official statement Sept. 12 that it would start participating in clinical trials for the third development phase of two vaccines produced by “a Chinese company that provides basic vaccinations for polio and is one of the leading companies in the field,” with trials conducted on about 15,000 people. The trials of the final phase aim to ensure the efficacy of the vaccines, the ministry said.

Meanwhile, the Egyptian Ministry of Health did not respond to an official Russian offer to establish a partnership with Egypt for producing the newly developed Russian coronavirus vaccine, dubbed Sputnik-V.

In a press statement Aug. 19, Russian Ambassador to Cairo Georgy Borisenko had expressed his country’s readiness to cooperate with Egypt to produce the Russian vaccine. “This vaccine could be the basis for further development of relations between Egypt and Russia,” he said.

Hossam Hosni, head of the scientific committee set up in March by the Egyptian authorities to combat the coronavirus, told Al-Monitor via phone that Egypt is participating with China in studies on the vaccines that the latter is working on. “Egypt has verified the safety and prevention measures of the two vaccines it announced clinical trials for. This is one of the reasons why Egypt prefers the Chinese vaccine, not to mention the fact that its production stages are subject to supervision and evaluation by the World Health Organization [WHO].”

The Russian vaccine is not included by the WHO on the list of vaccines whose safety and efficacy data that were collected during the clinical trial phase were subjected to review and assessment.

Hosni believes Egypt will become a hub for the production of coronavirus vaccines in Africa, since Egypt has the capacity to conduct its own safety and efficacy assessments on it. This is the case for the Chinese vaccine throughout the stages of its manufacture, as Egypt was able to peruse all reports related to each stage of clinical trials, he explained.

Hosni noted that Egypt has reserved 30 million doses of the vaccine developed by AstraZeneca and the University of Oxford in Britain, in case the vaccine’s efficacy and safety were proven. He added that if the third clinical trials on the Chinese vaccine are successful, it will be ready within six months from now.

An official source from the Ministry of Health told Al-Monitor on condition of anonymity, “The two coronavirus vaccines — whose trials the Ministry of Health announced it is participating in — are being developed by the Chinese company Sinopharm, the sixth-largest vaccine manufacturer in the world. The Chinese government has already approved the emergency use of one of those two vaccines, and this is the one Egypt will begin to test [on participants in Egypt]. Meanwhile, no statement has been issued regarding the second vaccine.”

The source explained that the two coronavirus vaccines are administered in two doses by intramuscular injections, 14 or 21 days apart. Egypt probably prefers the Chinese vaccine since Beijing has provided the necessary technology for Egypt to produce the vaccine, which is a major advantage for Egypt in light of the difficulty of the supply and distribution of vaccines, the source added.

Ahmed Azab, researcher in the right to health program at the Egyptian Initiative for Personal Rights, told Al-Monitor that Egypt is participating in many initiatives launched by the WHO. These mainly aim to ensure a fair distribution of the coronavirus vaccine, and to ensure access to it for developing countries such as Egypt that cannot afford the vaccine’s cost.

However, Azab noted that participation in WHO initiatives is not sufficient to ensure the vaccination of the largest proportion of the population in light of the major obstacles, most notably the lack of funding. “This could be why the Egyptian Ministry of Health is signing agreements — in particular with countries whose vaccine trials have reached an advanced stage, such as China,” he added.

He explained that the Egyptian preference for the Chinese vaccine may be linked to a political consensus between the two countries. “There are a number of questions that the Egyptian Ministry of Health should answer about the details of designing clinical trials, and whether or not the WHO will supervise them,” he said.

Azab added that the Russian vaccine has yet to pass the third stage of clinical trials. “No reports have been issued about the results of the trials so far in the first and second stages,” he added. “Russia had rushed to produce the Ebola vaccine [in June of this year], which passed only two stages. This vaccine was sent to African countries, but problems were later discovered in the percentage of antibodies generated by it.”