As part of the government’s plan to redistribute Egypt’s growing population, a project to turn a World War II site into a resort that also includes residential units is currently underway in north Egypt. 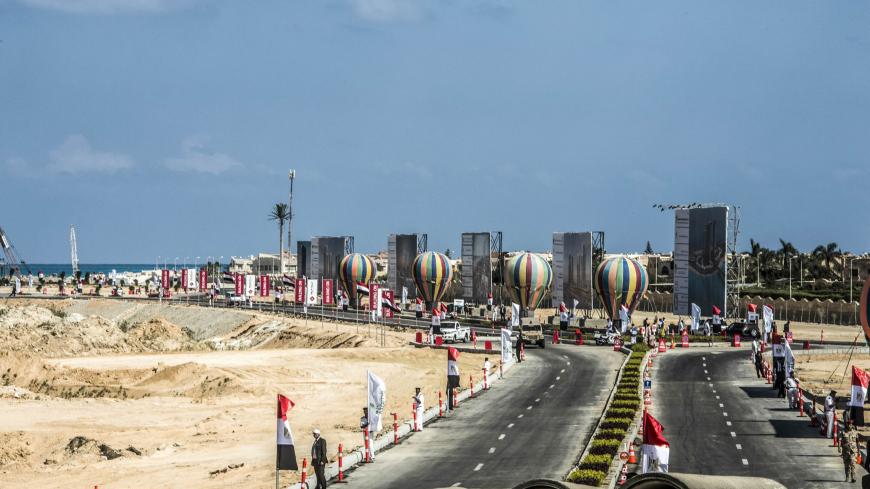 CAIRO — Egypt is turning a World War II site into a resort that promises to beat other holiday destinations, such as Sharm el-Sheikh and Hurghada, and add a new destination to the international tourism map.

New Alamein City, near the northwestern coastal city of Marsa Matruh and a few miles from Egypt's border with Libya, is Egypt's latest attempt to redistribute its population, diversify its tourist product and expand its urban space.

The government is spending billions of dollars on the construction of the city, which will cover an area of 49 acres. It will contain a huge coastal tourist district with over 15,000 hotel rooms. The district will also contain a 14,000-kilometer (8,700-mile) promenade on the Mediterranean, the exact size of the seafront in the northern coastal city of Alexandria.

Skyscrapers, out of the mold of Dubai Towers, are sprouting in the same area, along with amusement parks, cinemas and theaters, and a huge commercial district. The city will also include a residential district, containing thousands of apartments for Egyptians with limited income.

The government is also building apartments, villas and chalets for rich Egyptians and Arabs in the same area.

The historical quarter of the city will include the Alamein War Cemetery, which contains the remains of World War II victims.

A number of hotels, an amusement park, an open-air museum and a port services area will also be built in this historical quarter.

New Alamein will change the map of the northern coast, according to the government. “The city has already changed the tourist map on Egypt's northern coast, especially after it has become a main destination for tourists coming to the area,” Hani Younes, media adviser to the Egyptian prime minister, told Al-Monitor. “This city is designed to be sustainable, which means that it is fit for living all year round, not only during the summer.”

But before this area could be developed, land mines had to be removed from the area.

Alamein was the venue of some of the most important battles between the British Empire on the one hand, and the German and Italian armies on the other, during World War II. The area witnessed the Battle of Alamein, the culmination of the World War II North Africa campaign between these armies.

The land mines were especially concentrated in some 5,100 square kilometers (1,970 square miles) along Egypt's northwestern coast, according to the Executive Secretariat for the Demining and Development of the Northwestern Coast, a Ministry of International Cooperation mechanism that coordinates international demining efforts in Egypt.

A year after forming the Executive Secretariat, Egypt started demining the area in 2009, enlisting support from international partners. The process included the removal of millions of land mines and unexploded ordnance.

In August 2018, then-Minister of Investment and International Cooperation Sahar Nasr said that some 1,454-square kilometers (561-square miles) in Alamein had been cleared of land mines.

There had been previous attempts to demine the area; the land mines removed between 1980 and 2018 amounted to only between 10% and 15% of all land mines, which caused death and tragedies for hundreds of Egyptians over the years.

According to the Egyptian Foreign Ministry, abandoned land mines and unexploded ordnance from World War II has killed 697 people and caused 7,616 injuries. Some of those killed left dependents behind, and some of those injured cannot live without the help from others.

“The land mines were not easy to remove, especially in the absence of maps [with their exact location] in some areas and due to the high cost of removing them,” said retired army Gen. Nasr Salem. “Apart from obstructing development, these land mines posed grave dangers to the people living in the areas where they had been placed,” he told Al-Monitor.

New Alamein is just one development project in Egypt's attempt to redistribute its population and increase its populated space. This city is one of 20 new cities Egypt is constructing to accommodate 30 million people, including a new administrative capital on the outskirts of Cairo.

The construction of these new cities comes as Egypt tries to cope with an increase in the number of its population. Almost 95% of Egypt's population of 102 million is concentrated along the Nile River and in the Nile Delta, whereas most of the country remains sparsely populated or uninhabited.

The construction of the new cities will increase the populated space in Egypt.

The government hopes millions of people will relocate to the new cities. When the construction of New Alamein is complete in a few years from now it can house 6 million people.

The need to redistribute the population and find enough space to accommodate the growth of the country's population make it necessary for these new cities to be constructed.

“The construction of the new cities will open the door for increasing the populated space and redistributing the population,” Mohamed Ibrahim, a professor of architectural design at Ain Shams University, told Al-Monitor. “It is very important for Egypt to find housing for its growing population in the future.”