Egypt is still littered with land mines from past wars, endangering its citizens and complicating development efforts. 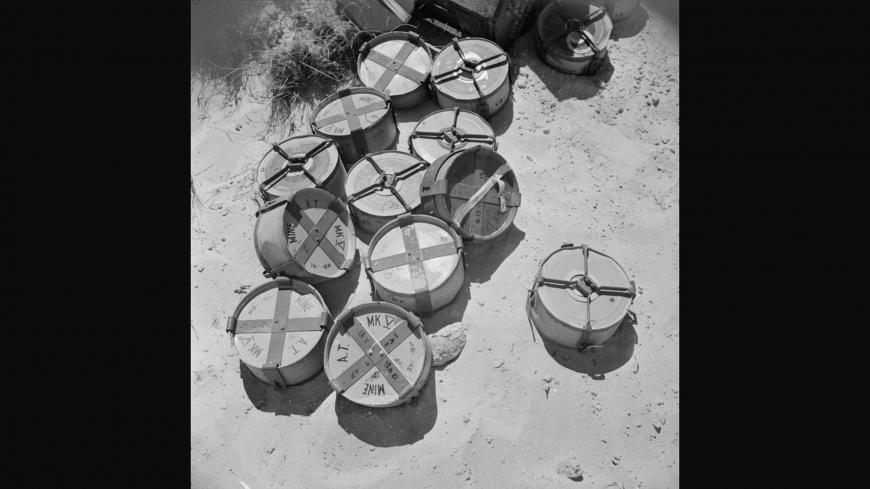 Though World War II ended almost 75 years ago, residents of Egypt's coastal city of Alamein still live with the danger of land mines left behind, a matter that prompted parliament to rekindle the call for more international cooperation.

On Jan. 29, the parliamentary Foreign Relations Committee met with Ahmad al-Fadhli, director of disarmament affairs at the Ministry of Foreign Affairs. They plan to review Egyptian diplomatic efforts to deal with the land mine issue in Alamein region, and interact with the relevant countries.

During the meeting, they also discussed the importance of enhancing international cooperation to provide Egypt with the modern techniques needed to fully clear the region.

Committee secretary Tarek el-Khouli said in a press statement that Egypt isn't using all its tools to deal with this vital issue, given its broad international relations. Khouli urged Foreign Ministry representatives to develop a new approach to the land mines issue and submit a comprehensive report.

The Second Battle of Alamein began in October 1942 between the Allied forces, led by British Marshal Bernard Montgomery, and the Axis forces, led by German Gen. Erwin Rommel. The defeat of the latter was a turning point in World War II and prevented Adolf Hitler and his Italian ally Benito Mussolini from conquering Alexandria and the Suez Canal. Alamein, in northwestern Egypt, lies about 60 miles west of the port of Alexandria.

Currently, a specialized unit of the Egyptian army based near Alamein conducts daily mine-clearance operations.

According to the State Information Service, some 17.5 million land mines from World War II were left behind, covering more than 250,000 acres of arable land along Egypt's north coast and Sinai. The Egyptian-Israeli wars also left nearly 5.5 million mines in Sinai and the eastern desert. Of that total of 23 million, Egypt's armed forces' have removed about 1.3 million mines since 1995.

Egypt is calling for international support for demining, especially around Alamein. The mines are hampering development of the area, in particular New Alamein city, one of the megaprojects being implemented under President Abdel Fattah al-Sisi. Parliament member Mohamed el-Ghoul recently resubmitted a 2017 motion demanding financial compensation from the countries that participated in World War II, mainly Germany and Britain, for the massive effort necessary to remove the millions of mines planted in the western desert.

“Years have passed since the second world war, and despite the silence of the guns and the reconciliation among the enemies of yesterday, Egypt and its people are still paying the price of a crime they did not commit," said Ghoul, who is a member of parliament’s Human Rights Committee. "Many people lost their lives or [were seriously wounded] because of a curse hidden in the sand: land mines."

In April, one person was killed and another injured in Matrouh governorate when a land mine exploded as the men dug a well.

Ghoul pointed out that parliament gave the Foreign Ministry a month to present a new way of dealing with the issues of compensation and international cooperation. “It is time to call for compensation at all international conferences," he said. "At least we can ask these countries [Germany and Britain] to drop Egypt's debts. We have to draw international attention to this issue. Such mines have hampered Alamein's development process for a long time.”

As the government is planning to turn New Alamein into a tourist destination, it needs to clear all the mines to ensure safety.

In 2007, the United Nations Development Program, in cooperation with Egypt's Ministry of International Cooperation, started the first phase of a demining program. It was funded by the governments of Germany, the United Kingdom, New Zealand, Australia and Japan.

The EU funded the second phase of the demining project in 2014 with a grant worth 4.7 million euros ($5.3 million). The project includes reintegrating mine victims into their communities, improving their livelihoods and raising awareness of the dangers of mines, according to the EU. That project succeeded in clearing mines from a total of 1,096 square kilometers (423 square miles).

According to the EU, the project has helped raise the awareness of the population, especially children, about the dangers of mines and how to act when facing this danger. The project also helped with developing New Alamein, which is expected to boost to the country's economy by creating more than 279,000 jobs.

In October 2017, Egypt marked the 75th anniversary of the Alamein battle. During the ceremony, Ivan Surkos, the EU's ambassador to Egypt, said 2,680 square kilometers of land along the northwest coast are still contaminated with explosives from WWII. “The remnants of war pose a great danger to the population and to the development of the region in general,” he stated.

Surkos further stressed the importance of supporting mine victims medically and economically. In 2016, the Matruh Artificial Limbs Center was established with funds from the EU.

Ayman Shabana, a political science professor at the Institute of African Research and Studies at Cairo University, told Al-Monitor that the Foreign Ministry is dealing with this issue with sensitivity, to keep its good ties with countries that participated in the Alamein battle. “So, in my opinion, resorting to [more] international mediation is needed. The Alamein issue should be internationalized, since international pressure can lead to positive results,” he said.

Shabana added that it can be hard to get financial compensation for land mines since that could open the door for many countries suffering from the same situation, like Mozambique, to call for compensation as well.

“To find middle ground, it's better to ask the [concerned] countries for technical assistance, like providing satellite images of the mines’ locations. The old maps of land mines aren't enough, since many mines have moved due to floods, climate changes or the movement of sand dunes over half a century,” he said.

Sending experts to help with the demining process "would be another kind of compensation,” he added.

Egypt has sought international help for years to handle this issue. It reiterated its demand that the countries that planted mines in its territory be responsible for their removal during the UN General Assembly meeting in 1993, the Geneva Conference on Disarmament in 1996 and the meeting between the Egyptian defense minister and his German counterpart in 1998. This prompted Germany to provide Egypt with 110 mine detectors.