Having stalled for a decade, Turkey risks further delays in meeting its international obligations to clear vast minefields, most of them along the Syrian border. 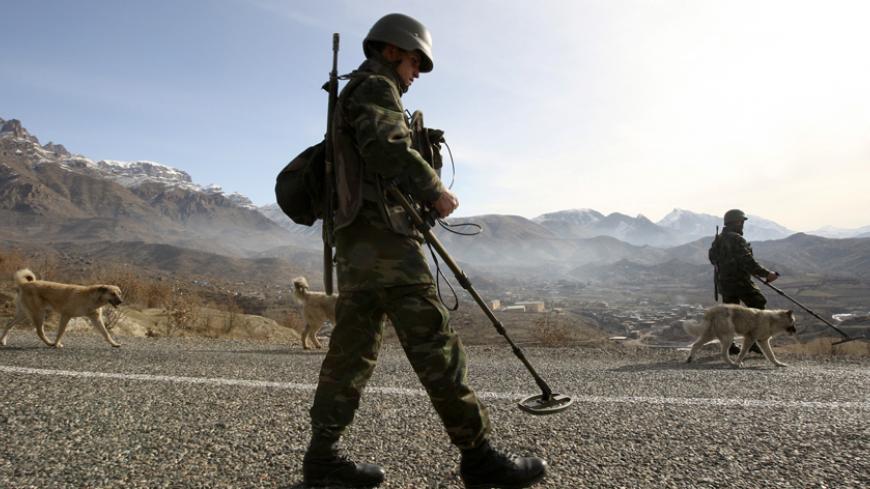 Turkish soldiers use mine detectors to search for land mines during a patrol on a road outside the southeastern Turkish town of Sirnak, bordering northern Iraq, Feb. 24, 2008.

Turkey has finally moved to set up a national authority to plan and oversee the demining of massive minefields, most of them along the Syrian border, months after missing its deadline under the Ottawa Mine Ban Treaty. The 10-year period for Turkey to clear the mines expired in March 2014. With progress next to zero, some 1 million mines remain buried in the border regions and predominantly Kurdish areas in the interior, posing fatal hazards for civilians and preventing the use of otherwise arable land.

In early December, the defense commission in parliament approved a draft law for the establishment of a National Mine Action Center, which the government described as an “urgent” matter. The general assembly is expected to pass the bill in the coming days. Human rights activists and observers have welcomed the move, but misgivings persist that even the new clearance deadline of March 1, 2022, may be a tall task for Turkey, as the war in Syria drags on and Ankara’s track record inspires little confidence.

Turkey’s most recent attempt at a major clearance operation failed in 2013, when it quietly canceled a tender to select a demining company to clear the Syrian border. Speaking at a Dec. 8 meeting of the defense commission, Defense Minister Ismet Yilmaz argued that the cancelation had been necessary because of the conflict in Syria and the Islamic State's (IS) presence across the border. “Aren’t all parties saying that members of the IS terrorist group should be prevented from entering Turkey?” he asked. “How could any reasonable person ask us to remove mines while the conflict in Syria is going on? That’s impossible.”

At least three Syrian refugees have been killed and nine others injured in mine blasts near the border, Human Rights Watch reported in December, citing reports of at least 70 explosions in a mined belt used by Syrians fleeing the IS offensive against Kobani.

Cenk Sidar, head of the Washington-based Sidar Global Advisors consultancy who closely follows the issue, called Turkey's mine-ridden border “a shame.” He blames the long clearance delays primarily on Ankara viewing the issue as “an opportunity to create economic rent” rather than as a humanitarian urgency.

“Had a transparent and efficient tendering process been employed, the region would have long been demined and equipped with electronic security systems. This would have ensured also a controlled and limited entry of refugees from Syria,” Sidar told Al-Monitor in an email. The latest tender, Sidar said, was doomed to fail regardless of the Syrian war, because of cronyism and Ankara's “lack of a clear road map.”

“A number of European and US companies submitted bids, but obscure firms, teamed up with companies close to the government, were eventually short-listed. It was clear at that point that things wouldn’t work out,” he said. “This will have a negative impact on future tenders as well.”

The tendering process has long been mired in controversy. In 2009, the government pushed through parliament a bill to enable demining companies to use the cleared land for agriculture for up to 44 years in return for their work. Although the courts had previously rejected a similar project, the government nonetheless insisted on this unusual formula, leading many to believe it had been tailor-made for a pre-determined company. A row ensued when the opposition claimed the project was destined for an Israeli firm. The Constitutional Court finally quashed the relevant clause.

Five years on, mistrust appears to linger. In the defense commission, the opposition had sought to insert safeguards in the new bill. Two proposals eventually voted down by Justice and Development Party parliamentarians had called for explicit emphasis that tenders be “transparent and open to competition” as well as guarantees that cleared land would be made available to local farmers.

The Landmine Monitor, an arm of the International Campaign to Ban Landmines (ICBL), winner of the 1997 Nobel Peace Prize, describes Turkey as a laggard among Ottawa treaty signatories, rating its performance as “very poor.”

Turkey began mining its borders in the 1950s amid Cold War jitters. Additional areas, including in the interior, were seeded in the 1990s while the army battled the Kurdistan Workers Party (PKK), whose fighters enjoyed safe haven in Syria and Iraq and also themselves used mines to ambush soldiers.

In documents submitted under treaty obligations, Turkey has identified 3,174 mined areas covering almost 215 square kilometers (83 square miles) and containing some 1 million anti-personnel and anti-tank devices. Only 1.1 square kilometers (0.4 square miles) have been cleared so far. The largest minefields, covering 190 square kilometers (73 square miles), are along the 910-kilometer (565-mile) Syrian border, with small amounts on the borders with Armenia, Azerbaijan, Iran and Iraq. There are more than 600 mined areas, remnants of the army’s struggle against the PKK, in addition to 346 suspected areas yet to be investigated.

Ankara estimates the cost of demining at $550 million for the Syrian border, and about $82.5 million for the eastern and southeastern borders, two-thirds of which would be financed by the European Union.

No official figure is available on the total number of mine casualties since the 1950s. Based on the estimates of local authorities in mine-affected regions and partial government statistics, the toll is believed to be more than 10,000 people killed or injured, according to Muteber Ogreten, coordinator of the Mine-Free Turkey Initiative, the ICBL’s local arm. Some researchers have estimated 3,000 deaths and 7,000 injuries along the Syrian border alone.

The victims include smugglers who used to bring in cheap goods from Syria, unsuspecting Kurdish villagers and children walking into minefields in rural areas as well as soldiers killed by PKK-planted mines.

Ogreten sees the mine agency bill as a step forward, but remains critical of the overall process. Discussions on the issue in Turkey “have been limited to how the Syrian border will be demined, how the cleared land will be utilized and what the economic gains will be,” she told Al-Monitor. Meanwhile, key humanitarian issues — such as assistance for disabled mine survivors, fencing off minefields and risk education for locals — are yet to be seriously addressed, she said, adding that Ankara had sought no input from civic groups or mine survivors when drafting the bill.

Ogreten expects a demining tender to be offered soon for the eastern border as part of the EU-funded project, while minefields in interior areas, which have been the deadliest, remain at the bottom of Ankara’s priority list.

With the Syrian conflict dragging on, the specter of further delays on the southern border looms large. “Mine clearance is technically and militarily impossible while the war in Syria continues and the threat of IS persists,” Sidar said.