Though there is a lack of official data, Iran remains the second-most mine-polluted country in the world, with eradication no simple task. 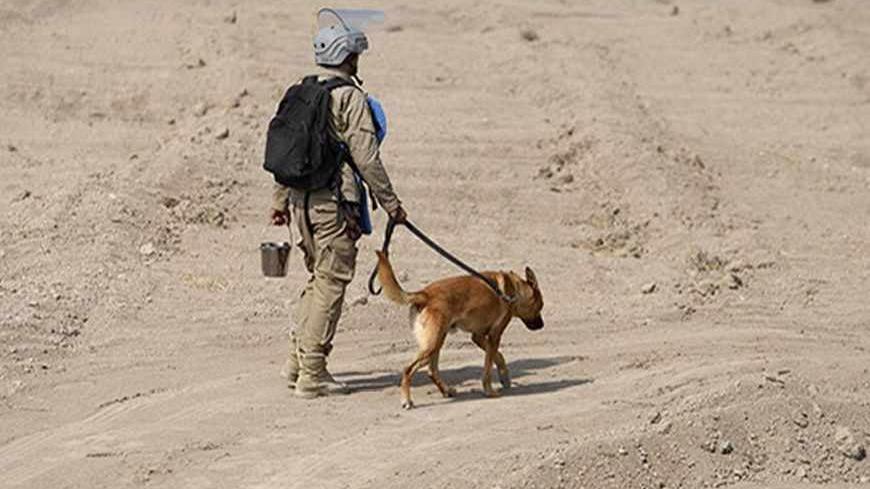 A member of the Iraqi Mine and Unexploded Ordnance Clearance Organization works with a sniffer dog to find mines in Iraq's southern city of Basra on Nov. 6, 2012. Both Iraq and Iran have millions of mines left from the Iran-Iraq war. - REUTERS/Atef Hassan

Iran is the second-most mine-polluted country in the world. On Aug. 30, Iranian Students’ News Agency acknowledged a UN report which stated that 16 million mines remain planted in Iranian soil. The number of land mine victims has never been officially released by Iran's Mine Action Center (IRMAC), but unofficial statistics point to one person being maimed or killed every day.

Five provinces in western and southern Iran — West Azerbaijan, Kermanshah, Kurdestan, Ilam and Khouzestan — are polluted with mines left over from the Iran-Iraq war. Iranian officials generally refrain from citing numbers when they talk about mine-polluted areas. In 2012‪, a Khouzestan official claimed that it is not clear exactly how many mines are left there.

One reason for the lack of accurate information, say Human Rights Watch and the Landmine and Cluster Munition Monitor, which have worked with IRMAC in the past, is that ties with Iran have essentially been severed and Tehran is no longer covered by the Landmine Monitor, which is a program providing research and continuous monitoring for the International Campaign to Ban Landmines and the Cluster Munition Coalition.

According to the Iranian Institute of Medical Research for Handicapped Veterans, over 92% of mine victims are utterly unprepared and lack the basic education to avoid an encounter with a mine. Many victims are schoolchildren kicking soccer balls along dirt roads who accidentally or out of curiosity happen to kick a land mine.

Iranian NGOs have not had an easy time working on this matter, either. Upon receiving the Nobel Peace Prize in 2003, Shirin Ebadi, Iranian lawyer and human rights activist, vowed to spend a substantial sum of her monetary prize on ridding the country of mines.

Ebadi told Al-Monitor, "I've been continually informing the global community and human rights activists on the situation of mine-polluted areas in Iran. I have appeared before the Council for Human Rights and have spoken with [special UN human rights envoy to Iran] Ahmad Shaheed regarding the issue."

This non-governmental agency, called the Association for Demining in Iran, was founded in 2003 (and received an official permit from Iran's Interior Ministry in 2005). According to Ebadi, it was the sole NGO established for the purpose of demining. Ebadi bought the office for this NGO and began work with co-founding partners.

Ebadi said, "We drew a lot of attention to the vast mine-polluted areas of five Iranian provinces and helped the government. Our efforts led to the production of several documentaries and movies on the topic of land mines in Iran. We put a lot of effort into alerting locals, particularly schoolchildren, using shapes and drawings on the covers of composition notebooks, which we distributed for free."

"The tragic reality," she said, "is that most mines in southern Iran are planted near oil wells."

“In 2008, the association was shut down. When the Center for the Defenders of Human Rights [another organization Ebadi founded, with an office space in the same building] was shut down by the government, the office of our demining association was forced to close as well. We tried in vain to convince Iranian officials to allow us to resume operating.”

Ebadi said that another factor that has impeded the work of demining was Western sanctions. However, on Sept. 10, the US Treasury issued a statement about an adjustment to the implementation of sanctions against Iran to enable Iranian NGOs to seek help and cooperation for projects related to human rights activities, which may bring about a possible opening.

Sanctions, however, appear to be only one of the reasons the existence of land mines continue to plague Iran.

A former IRMAC employee living in Khouzestan who did not want to be named told Al-Monitor, “Tehran insists that severe sanctions have made it nearly impossible for the government to buy and provide the needed technology, but many believe Iran wishes to hold the reins tighter on borders and is taking advantage of the mines to achieve this goal.”

This is a claim that was also repeated by Ebadi, who said that Iran “uses mines for further border security."

According to the Landmine Monitor — the publication of the International Campaign to Ban Mines — Iran gave a very revealing reason for its position and voting record on land mines. In criticizing The Ottawa Convention on banning land mines, Iran’s government has stated that the convention focuses mainly on humanitarian concerns and overlooks military concerns regarding border protection. Tehran goes on to state, “Due to the difficulties of monitoring sensitive extensive areas by established and permanent guarding posts of effective warning systems, land mines continue to be the effective means [for countries like Iran] to ensure the minimum security requirements of their borders.”

According to a source with the Landmine Monitor who spoke with Al-Monitor on condition of anonymity, Iranian government representatives have told the Landmine Monitor that if land mines are removed from the country’s borders, more Iranian soldiers will be killed while protecting the borders and drug trafficking will increase dramatically. They also state that the cost of Iran joining the Mine Ban Treaty would be “enormous,” and that many new technologies would not be available to Iran due to “dual-use technology” limitations.

According to the Monitor’s website, in a February 2006 letter to the Monitor, the Iranian Ministry of Foreign Affairs stated, “Due to our expansive borders and problems resulting from narcotics and terrorist trafficking, our defense institutions are considering the use of land mines as a defense mechanism.”

Mary Wareham, arms division director for Human Rights Watch, has worked with IRMAC in the past. She told Al-Monitor, “IRMAC is not happy [with] the Monitor's failure to report on their work, but when we last met, they did not respond when the editor asked about the reason that successive emails requesting information had remained unanswered by the Iranians. They promised to send a full update, but since then, silence and no response to further email requests ...”

Despite the ongoing human tragedy in Iran, on the International Day of Mine Awareness (April 4) 2013, Iran's defense minister, without sensing the irony, offered his "country's help and cooperation" to countries with a substantial mine presence.

No doubt Iran realized the seriousness of the issue of land mines. The Landmine Monitor also reported that Iran provides $2.5 million a year to a local Hezbollah-affiliated NGO in Lebanon that clears cluster munitions. It's the only operator in Lebanon the United States does not fund.

But whether the Iranians address the issues with land mines or not, even they admit it is not easy task. In a November 2012 article, a Fars News report on the slow process of mine clearance in Kurdestan called the complete clearance of mines in the region a “dream.”