The vast number of anti-personnel mines planted during the Iran-Iraq War continue to maim and kill on both sides of the border, but Iran refuses to engage states and organizations with experience in de-mining. 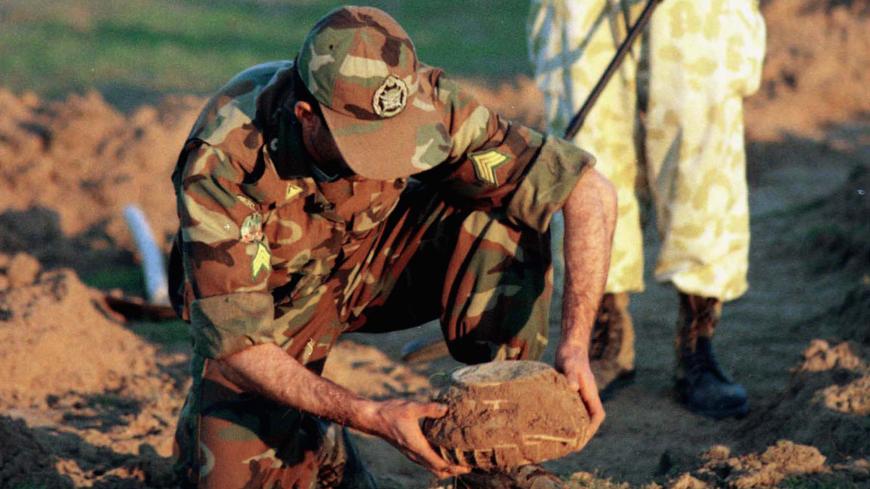 Iranian soldiers recover an unexploded anti-tank mine, Jan. 21, 2001, left over from the 1980-1988 war with Iraq, using a metal detector and spike but no protective clothing. - REUTERS

Mansur Moradi began panicking as blood poured from both his legs after an unexpected explosion. Stranded in a minefield in western Iran, any movement he made could trigger yet another blast. The mountainous region is covered with millions of anti-personnel landmines laid during the 1980-88 Iran-Iraq War. Ultimately, the 36-year-old survived, thanks to luck. Iranian border guards managed to safely retrieve him, unlike many other similar victims, and transport him to a nearby hospital by air ambulance.

The prevalence of landmines in western Iran, largely home to ethnic minorities, including Kurds, Lurs and Arabs, poses a serious hazard to the lives of millions of Iranians. The people living in the border provinces of West Azerbaijan, Kurdistan, Kermanshah, Ilam and Khuzestan continue to experience serious injuries as well as death from landmine explosions nearly 30 years after the end of the war with Iraq, a devastating conflict that saw the widespread use of anti-personnel mines.

While memories of air raid sirens, warplanes breaking the sound barrier and a constant fear of bombs and missiles might have faded in some parts of Iran, residents of the border areas between Iran and Iraq are regularly reminded of the costs of the war. An estimated 20 million landmines were laid in western Iran during the hostilities with Iraq and during fighting between Kurdish militants and the Tehran government in the 1980s. On top of this, another 7 million anti-personnel mines were scattered on the other side of the border, laid by the Baghdad government in Iraqi Kurdistan.

The Iranian government launched de-mining efforts after the war, but its approach has been insufficient as well as mismanaged. Despite official claims about the end of de-mining operations in some areas, people still lose their lives or sustain long-term injuries on a regular basis. On Feb. 27, a mine exploded under the vehicle of a family of four out for a picnic near the southwestern city of Shush. Everyone in the car suffered injuries, including a 4-year-old girl and a 2-year-old boy.

No one appears to have reliable figures on how many people have fallen victim to landmines since the end of the war with Iraq. "Landmine Monitor," the annual report of the International Campaign to Ban Landmines, references 10,000 casualties since 1988. The economic cost of clearing these random death traps has been a financial burden on the government and the people of Iran.

In 2017, Iran Without Landmines, a campaign that this writer helped launch in 2013, documented 79 casualties, including nine children, from landmines and other explosive remnants of war. Of those, 17 died and 62 sustained serious injuries, such as the loss of limbs. Ilam province accounted for the highest number of civilian deaths in 2017, with four people killed. Iran Without Landmines documented 56 casualties nationwide in 2016, including 18 deaths.

Government support and rehabilitation for landmine victims has also been inadequate. A 1994 law, amended in 2010, mandates the payment of salaries or benefits to war refugees, people who return to their homes in war-torn areas of the country and those disabled as a result of contact with explosive materials. Victims who are not recognized as disabled “veterans” by a special commission are only entitled, upon commission approval, to negligible allowances afforded by the Imam Khomeini Relief Foundation or the State Welfare Organization.

The law does not provide for legal procedures to appeal commission decisions. Victims also face prolonged investigations into their cases, leaving them in the meantime without financial assistance from the state to cover medical and other costs before a decision is made regarding their status. Even in the case of a favorable decision, the assistance provided is not retroactive. Costs incurred between the moment an accident occurs and the commission’s decision are not reimbursed.

Iran has a mixed track record on measures opposing anti-personnel mines. In 1997, it implemented an open-ended moratorium on the export of anti-personnel landmines, and later, at the UN General Assembly in November 1998, the Iranian ambassador stated that the “total elimination of mines backed by a comprehensive verification mechanism was the ideal.” Iran, however, has not become a party to the 1997 Mine Ban Treaty, which counts 80% of countries as signatories. Iranian authorities have also consistently refused to seek the assistance of international organizations specializing in de-mining.

A landmine is inherently indiscriminate by nature. Once a mine is laid, it does not distinguish between a combatant and a civilian. It remains active long after the end of hostilities, striking fear in the heart of nearby communities and limiting the mobility of residents to move around and in some cases access productive natural resources.

Iran still refuses to benefit from the experiences of other countries in clearing the millions of landmines dotting its western border. The time has come for authorities in Tehran to rethink their policy, first and foremost for the sake of the country's citizens.