Yemeni women and children continue to die from land mines planted by Houthi rebels across the country. 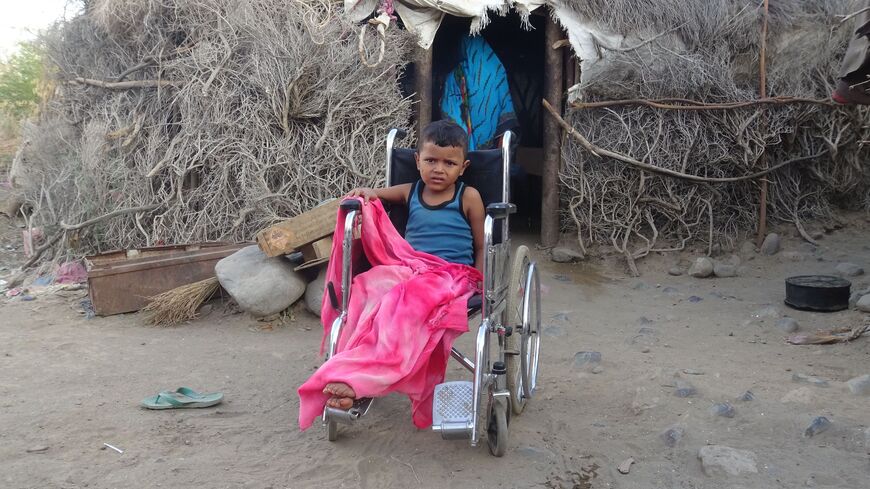 Yemeni seven-year-old Abdullah, who was wounded in a land mine explosion in the Taez province, western Yemen, sits on a wheelchair next to his family's shelter in al-Hamili district on Nov. 29, 2018. - AFP via Getty Images

SANAA, Yemen - For more than eight years now, the bloody conflict in Yemen has killed and wounded civilians from all segments of society. A large proportion of them are women and children who fell victim to land mines planted by Houthis.

In 2017, Dalila Abdo Ahmad and her cousin Afaf went out to get water in the Sabir al-Mawadim district of Taiz governorate. No one knew that in the night before, Houthi operatives had sneaked in to plant mines throughout the city. As the two women walked, a mine blew up. Dalila lost both her feet. Afaf lost her right foot and broke the other.

In 2018, Rabab Qaed left her house in al-Saeediya town in al-Khawkhah district of al-Hodeidah governorate with her cousin Mohammad Hanbala to visit her husband in detention.

On their way, the pair crossed the Dhimmi bridge where a land mine planted by the Houthi rebels exploded, killing Hanbala on the spot. Five days later, Qaed succumbed to her wounds.

According to a United Nations Office for the Coordination of Humanitarian Affairs report issued Nov. 15, land mines in Yemen have caused about 300 civilian casualties, including 95 deaths and 248 injuries, between April and September 2022. The most affected areas are the front lines in al-Hodeidah and al-Jawf governorates.

The report noted that these figures are higher than the casualties recorded in the six months preceding the truce that was announced in April. During that period, civilian casualties numbered 248 including 101 deaths and 147 injuries.

Osama al-Gosaibi is the manager of Project Masam, a humanitarian land mine clearance project in Yemen launched by Saudi Arabia in 2018. He told Al-Monitor that the Houthis “follow a brutal approach by placing mines and booby-trapped devices in schools, health centers and water tanks in large quantities.”

“Clearing Yemen of mines needs years of work given the large quantities of planted mines and a lack of data on where these mines were placed,” he added.

Faris al-Hamiri, the director of the Yemeni Observatory for Human Rights, told Al-Monitor that children and women make up about 75% of the civilians who perished as a result of mine explosions, booby-traps, ammunition, explosive devices and projectiles.

“We documented cases of child victims as a result of explosive devices camouflaged in the form of children’s toys, plastic boxes and stones that were placed on the sides of roads, the [empty] homes of the displaced, farms, near water wells and sheep grazing areas,” he said.