Although efforts are underway to clear Ramadi from landmines, the displaced cannot return to their cities given the risks they could be facing. 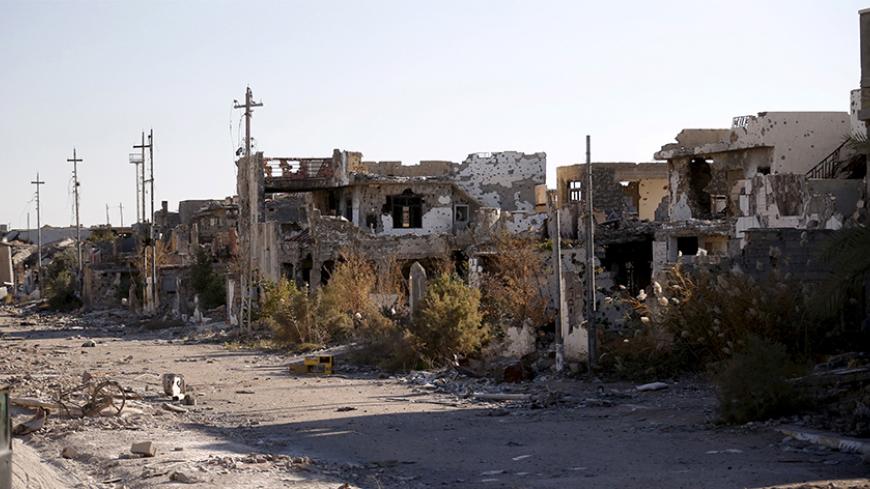 Destroyed buildings are seen in the city of Ramadi, Iraq, Jan. 16, 2016. - REUTERS/Thaier Al-Sudani

Samira Ayyash and her family are refusing to return to Ramadi in Anbar province after having fled to the Iraqi capital, Baghdad. Ayyash fears that she and her two sons and daughter could fall victim to a landmine or bomb in the Ramadi streets or inside their house, which they deserted June 8, 2015, to escape the oppression of the Islamic State (IS).

Ayyash told Al-Monitor, "Returning to Ramadi right now is impossible as long as the city is not clear of landmines. Our neighbors and friends who are currently in Ramadi tell us that there is a major threat to civilians from landmines, and this is worrying. We fled death when IS controlled Ramadi; we cannot risk our lives again. We will stay in Baghdad so as not to fall victim to a landmine or bomb."

According to the estimates of the United Nations Assistance Mission for Iraq, Ramadi is the city with the most landmines in the world, and most of the city neighborhoods are unsafe because of these explosives.

Lisa Grande, the UN humanitarian coordinator for Iraq, said in a statement after visiting Ramadi March 24 that civilians risk their lives in the city because of landmines and booby-traps everywhere.

She said that the Iraqi government should make clearing landmines its top priority to ensure the security of the civilians living in the city, because Ramadi is unsafe for the displaced to return and it is difficult to ensure their safety there.

Grande called on the international community to end the suffering of the displaced families of Ramadi at a time when the UN mission recorded that only a few hundred displaced people out of 250,000 families have returned.

Landmines are hindering the return of the displaced, particularly since most of the mined areas are civilian, not military areas.

Asma al-Ani, a member of the Anbar provincial council, told Al-Monitor, "The city of Ramadi has not been cleared yet because Iraq does not possess modern mine-clearing equipment." But Anbar Governor Sohaib Alrawi told Al-Monitor that he will soon contract a US company to clear the mines.

Ani said that the displaced must not return to Ramadi right now because their lives will be put in danger — which areas are mined and which are safe have not been specified yet. IS has booby-trapped everything, even electricity poles in the streets.

She added, "Ramadi needs an international effort to get rid of the landmines and to help the reconstruction, because Ramadi is now a city without the life necessities."

On April 5, Reuters quoted two US officials and an unidentified diplomat as saying that "a US de-mining company is removing explosives and training Iraqis to dismantle the devices planted by IS in the largest Iraqi city retaken from the militants.”

The article continued, "Hundreds of IEDs planted throughout the streets and buildings of Ramadi, 100 kilometers [62 miles] west of Baghdad, have delayed the return of around half a million displaced residents.”

Thaer Kanani, the director of the Iraqi al-Khibra al-Fanniya company for clearing mines and unexploded ordnance, told Al-Monitor that his company “entered Ramadi March 1 and performed volunteer work there, managing to clear 5,000 explosive devices planted on the streets.

He said, "The return of the civilians at the moment is a big risk because the city has been cleared completely and the engineering teams are facing major challenges in dismantling and neutralizing the explosive devices. There is still a danger to everyone, especially civilians.”

On April 5, the US Embassy in Baghdad announced that $5 million in new US assistance will be allocated to help safely clear explosive hazards in Ramadi.

An embassy statement said, “ Under this new initiative, U.S. Embassy Baghdad and the Office of Weapons Removal and Abatement in the U.S. Department of State’s Bureau of Political-Military Affairs have awarded a contract to Janus Global Operations, one of the world’s leading demining companies.”

In an interview with Al-Monitor in Baghdad, Ali al-Mashhadani, a journalist and activist from Ramadi, said that it is difficult to survey the landmines in Ramadi, which pose a real threat to civilians. On April 7, landmines caused 11 families to return to Iraqi Kurdistan after they found their homes in Ramadi to be booby-trapped.”

He added, "The lives of civilians are in danger, and it is difficult to create suitable conditions for their return in the near future, especially since there is a political power struggle in Ramadi.” He did not identify the parties and the causes of the struggle.

Given the risks posed to those who return to Ramadi, the Anbar local council decided to stop bringing back the displaced to the city of Ramadi at the present time. Yet, those who return before landmines are removed from their neighborhoods and houses remain at great risk.