What it will cost to rebuild Iraq

The city of Ramadi recaptured from the Islamic State requires international reconstruction efforts and aid, so that its displaced residents may return and rebuild their lives. 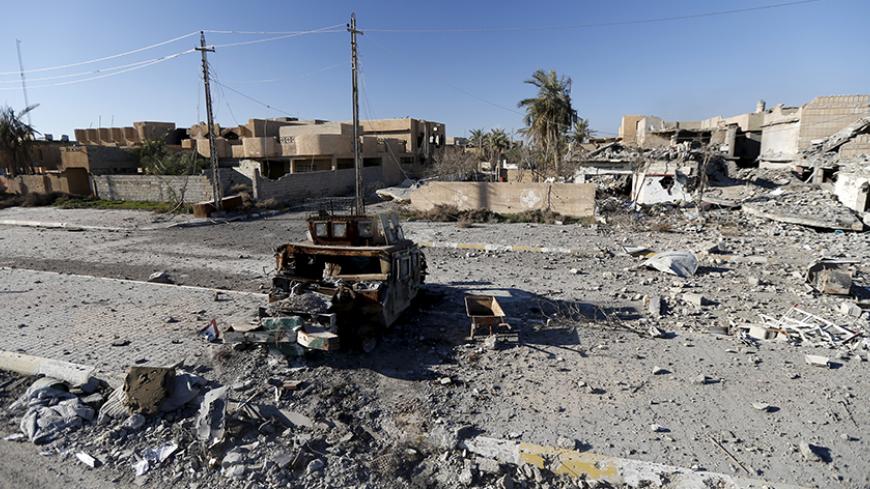 Destroyed buildings are seen in the city of Ramadi, Iraq, Jan. 16, 2016. - REUTERS/Thaier Al-Sudani

BAGHDAD — “Ramadi has turned into ruins,” said Ouda, a soldier who has been fighting in the Iraqi army’s Seventh Division since mid-2015. Ouda took part in the liberation of Anbar province from the Islamic State (IS), which took hold of the city of Ramadi in May 2015.

Al-Monitor met Ouda (a pseudonym), who is a resident of Baghdad, in one of the cafes of the capital during his day off.

He recalled, “We fought with my comrades violent battles to expel radical IS militants in several axes of the city of Ramadi and the province of Hit. The battles wreaked havoc in Ramadi.”

Ouda described the situation in Ramadi to Al-Monitor on condition his real name not be used, because as a soldier he is not allowed to speak with the media.

“Ramadi’s houses and streets are all filled with mines. The entire city will crumble as a result of the vast quantity of mines left by IS,” he said.

Ouda, who is in his mid-30s, said that IS has booby-trapped everything. “Mines exploded all over the place as we moved inside the city. This is IS’ style. It destroys everything.”

The High Level United Nations mission to Ramada confirmed this situation, estimating that the city could be one of the worst mine-infested cities in the world. The mission's statement followed the visit to Ramadi on March 22 of the United Nations Development Programme (UNDP) resident representative and UN resident and humanitarian coordinator for Iraq, Lise Grande.

After assessing the situation in the city, Grande said in a press statement, “It is a tragedy that people are dying and injured because of booby traps. The reality is that many if not most neighborhoods in Ramadi aren’t yet safe.”

A UN analysis of satellite imagery in February showed that around 5,700 buildings in Ramadi and its outskirts had sustained different levels of damage since mid-2014, with almost 2,000 buildings completely destroyed.

The staggering devastation of Ramadi and fear of mines pushed Khansa al-Dulaimi to leave Ramadi in April 2015 and seek refuge in Baghdad. Dulaimi rented a small apartment in the predominantly Sunni neighborhood of Adhamiya, while her husband fled via Turkey to Europe. She hopes her family will be reunited again if her husband is granted asylum in Germany.

She told Al-Monitor that she did not own a home in Ramadi, but lived in a rented house. “Things are difficult there. I am afraid to return to Ramadi because of the land mines and lack of security in the city. I will stay here in Baghdad for now,” she said.

Dulaimi lives off her savings; her husband had sold his car before he left and she sold all her gold jewelry. The family's savings allow her to provide for her three children who stay with her in Baghdad.

She said, “I will not go back. I would rather bear the hardship of living here in Baghdad instead of watching death every day in Ramadi.”

Member of parliament Liqa al-Wardi from Anbar told Al-Monitor that the city of Ramadi is like the Syrian town of Kobani because of the fighting, military operations and indiscriminate terrorist bombings.

“Thousands of houses, hospitals and bridges have been destroyed, as well as [public] buildings and schools,” she said. “The city was [already] neglected by the Iraqi governments after 2003, and now it is witnessing difficult circumstances.”

Wardi called on the Iraqi government to cooperate with the international community to reconstruct Ramadi and not to undervalue the previous and ongoing destruction and devastation. “The city requires large sums of money, but that doesn't mean it should be abandoned,” she said. According to her, the reconstruction of Ramadi is an essential and positive step for the return of its displaced residents.

Bassem Jamil Antoine, vice president of the Economists and Industrialists Iraqi Association, told Al-Monitor, “Iraq needs about $60 billion to ensure the reconstruction of areas recaptured from IS in Iraq, including Ramadi. Iraq will not be able to afford the reconstruction of these cities without international efforts and aid.”

Following his visit to Iraq on March 26, Secretary-General of the United Nations Ban Ki-moon promised international support for the country to reconstruct the liberated areas, acknowledging the significant challenges facing Iraq in the future.

In a press statement, Ban pointed to the challenges that remain to be addressed in these areas, including massive destruction and widespread contamination of improvised explosive devices.

Saad al-Hadithi, a spokesman for Iraqi Prime Minister Haider al-Abadi, told Al-Monitor, “Ban’s visit is a confirmation of the international community's support for Iraq in overcoming its financial crisis. A donors' conference will be held in April 2016; it will probably be held in the Jordanian capital, Amman, to raise funds for the reconstruction of liberated areas, including Ramadi.”

Hadithi added, “The World Bank expressed its desire to reconstruct liberated areas by providing financial aid, determining the method of spending such aid and ensuring there is no suspicion of corruption. The World Bank and the Islamic Development Bank will encourage international organizations and donors to attend the donors conference to support Iraq in the reconstruction of liberated areas.”

The reconstruction of Ramadi and other devastated Iraqi cities and the return of their displaced residents is now being discussed by international parties. It remains to be seen, however, whether the international community is up to the challenge.