Protesters in Anbar province are considering calling off their planned protest in Baghdad, amid unprecedented security measures from Iraqi authorities in the capital, writes Ali Abel Sadah. 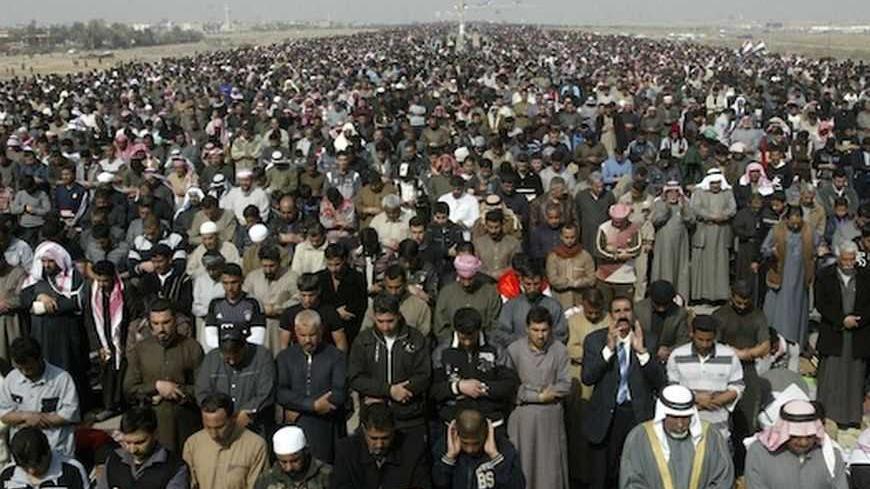 Iraqi Sunnis in Anbar province are considering reversing the decision to move their protest to Baghdad on Friday, Feb. 15. The move comes after the government implemented unprecedented security measures around the capital to prevent them from entering the city. Moreover, the government is preparing to declare a curfew on Thursday, with the return of assassinations and liquidations in Baghdad’s residential neighborhoods.

Demonstrators in Anbar announced last Friday [Feb. 8] a “peaceful march” to Baghdad to pray in the Abu Hanifa Mosque.

The mosque, which is located in the Sunni-dominated Adhamiya neighborhood, is an important religious site for Iraqi Sunnis in Baghdad and the provinces. It has authority over a large number of Sunni believers.

The decision to move the protest to Baghdad reflected a qualitative change in the demonstrators’ movement against the Nouri al-Maliki-led central government.

Demonstrators in Anbar called on Shiite clerics in Najaf and Karbala to attend the prayers. The demonstrators demanded that government and security services protect them, but warned that if they were attacked by the state militias, they would “crush them.”

But the widespread deployment of security personnel at the entrances to Baghdad, alongside security checkpoints near Adhamiya, where the Abu Hanifa Mosque is located, prompted the protest leadership to retract the decision to move to Baghdad.

Rafi Taha Rifai, the Sunni Grand Mufti of Iraq, said in a statement obtained by Al-Monitor that the demonstrators’ decision “to go to Baghdad was rejected by the dictatorial authorities."

Rifai called on demonstrators to “postpone the decision to move to Baghdad to an appropriate time.”

Sources close to the leaders of the Anbar demonstrations expected activists to stay at their traditional place, in the “square of glory and dignity.”

The decision to postpone going to Baghdad is likely given that the protests’ most prominent leaders called for calm and asked protesters to think about potential damage caused by moving protests and prayers to Baghdad.

Ahmed Abu Risha, the head of the Anbar Awakening Council, said that a decision on whether to go to Adhamiya to pray depended upon decisions by “the dignity parliament” and protesters’ religious authorities. The "dignity parliament" is an unofficial name given by the demonstrators for a civil gathering that consists of representatives of the people's committees, which organize the protests.

Abu Risha stressed that he sought to calm the situation and keep the protests peaceful.

The call made by Abu Risha — a Sunni tribal leader who turned against al-Qaeda in 2008 with the support of US forces — comes against the backdrop of Sunni concerns over potential contact between activists and security forces.

Abu Risha said that “prohibiting protesters from praying in the Abu Hanifa Mosque and from visiting the shrine of Imam Musa al-Kadhim did not shock protesters, because we expect more than that from the government.”

Previously, Abu Risha told Al-Monitor that he “works on calming the situation and maintaining the protests as they are,” after he received a copy of the Iraqi Ground Forces Command’s letter, in which they assert that they will prevent protesters from crossing into Baghdad.

Iraqi security sources told Al-Monitor that military forces received commands to block demonstrators from entering the capital, and that they had imposed a security cordon in Adhamiya.

The Anbar Operations Command, the military authority tasked with preserving security in the province, prevented citizens from crossing into Baghdad, and ordered transport vehicles in the parking lots in Fallujah and Ramadi to leave, fearing that they would be used in Friday’s demonstration. Moreover, security forces in the Taji area, the northern entrance to Baghdad, prevented the people of Saladin and Nineveh provinces from entering the city.

The Iraqi government is waiting on demonstrators to decide whether to move to Baghdad before deciding on a comprehensive curfew in the capital and preventing demonstrators from entering the Abu Hanifa Mosque.

The citizens’ movement in Baghdad was paralyzed in the days before Friday’s demonstration as a result of security measures.

The decision to move the demonstration to Baghdad, and its accompanying security measures, coincided with the call of a Shiite cleric who leads Hezbollah in Iraq to support the government in protecting the Shiites from Sunnis, who he described as sponsors of terrorism.

Wathiq Battat, secretary-general of the Iraqi wing of Hezbollah, announced the formation of “al-Mukhtar Army” to support the government in fighting terrorism and terrorist groups and in protecting the Shiites, and said that the Sunni areas in Iraq had become “fertile ground for terrorism.”

Eyewitnesses and staff at Baghdad’s hospitals reported the arrival of bodies with gunshot wounds, as a result of assassinations — primarily targeting Sunnis — in different parts of Baghdad.

Nevertheless, on Feb. 9, Maliki called on the citizens to cooperate with security services and report on Battat's whereabouts, with the aim of arresting him as soon as possible.