Why many Fallujah residents have yet to return home

The city of Fallujah is not safe enough yet for residents to return, as IS cells are still operating and some are afraid of revenge by the Iraqi forces. 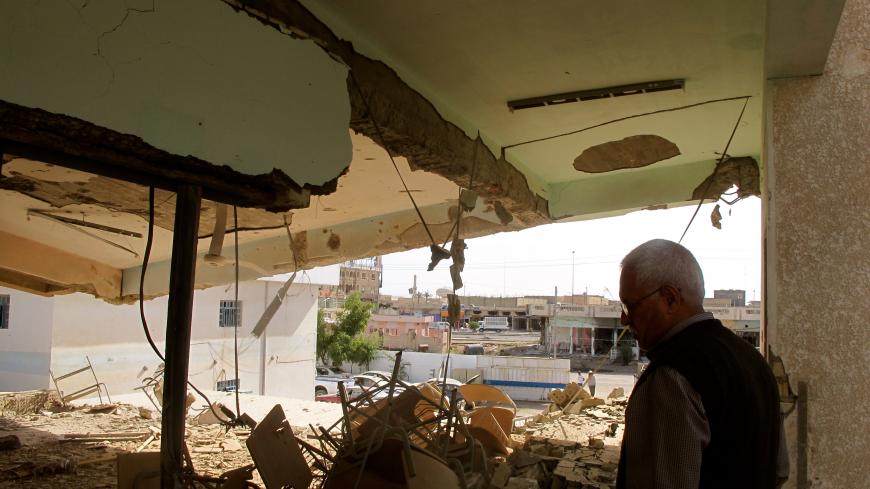 A secondary school teacher looks at the damage to his school, which had just reopened several months after the city was taken from the Islamic State, Nov. 9, 2016. - Shelly Kittleson

FALLUJAH, Iraq — Two car bombs hit central Fallujah Nov. 14, killing several civilians and members of the security forces. A curfew has been imposed. This is the first security breach in the city after its liberation in June.

Almost five months after being retaken from the Islamic State (IS) following hard-won battles lasting several weeks, Iraq’s "city of mosques" is slowly being repopulated.

Several mosques can be seen from the city's main streets, damaged but still standing. A popular restaurant called Badiya (Desert) seems busy during lunchtime, mostly with security forces. Central streets have been cleared, and many of the city’s severely damaged, pastel and desert-colored, low-slung buildings are under repair.

Fallujah Mayor Issa Saer al-Assawi told Al-Monitor that many basic services had been partially restored and that about half of the inhabitants had returned to the city as of Nov. 9.

He said that out of roughly "54,000 families total, around 27,500 have returned." The city, located about 60 kilometers (37 miles) west of the capital in the restive Anbar province, had a reported population of just under 300,000 five years ago.

Fallujah was the first major city taken by IS in Iraq, some six months before Mosul. It had long been a stronghold of Sunni opposition to the Shiite-led central government after the fall of Saddam Hussein in 2003 and the insurgency against US forces.

The city is infamous among the Western public for being the place where four US contractors working for the Blackwater private military company were dragged from their vehicle, killed and hung from a bridge over the Euphrates River on March 31, 2004. This ambush was followed by what are known as the first and second battles of Fallujah, in April and November 2004, respectively.

The city has also become known for extremely high rates of birth defects after 2003, allegedly connected with the use of depleted uranium and white phosphorus during military operations.

Fallujah was seen as ripe for IS recruitment, and it was taken by the group in the first few days of January 2014.

"The population was deceived by them. We thought that they were revolutionaries," one former Fallujah native now living in Baghdad told Al-Monitor on condition of anonymity. "But most of the propaganda came from imams from other areas in Anbar province such as al-Qaim, Anah and Rawa." All are farther west and some are still under IS control.

Nahla al-Rawi, an Anbar provincial council member originally from al-Qaim, told Al-Monitor that many Iraqi government and international coalition airstrikes in her area were currently hitting civilians. She said most of the people there were from her tribe, and that "everyone wishes those belonging to IS with blood on their hands would just die. However, they need to be held accountable before the central government."

Police chief Jamal al-Jumaili told Al-Monitor that he had been at the forefront of operations both in Fallujah and the nearby provincial capital of Ramadi, which was taken back in late 2015. The Counterterrorism Services and the national police forces worked together to liberate the area.

Jumaili served in Saddam's army prior to 2003 and was appointed police chief after the city was retaken a few months ago.

In comparing the two main urban centers in the province, he said the "fight was harder in Fallujah, but Ramadi was more heavily damaged because IS laid more booby traps" before abandoning the city.

He added, "They always thought they would at some point be kicked out of Ramadi, but not Fallujah because of the town’s religious symbolism."

Jumaili said that almost all of the city had been cleared of the explosives that had been planted during the group’s presence there. Al-Monitor was told that a plume of gray smoke rising from one area of the city during the visit was part of the destruction of explosive devices that were found.

The main hospital now provides only basic stabilization services to patients, and like most of the town, it has only unpurified water for a few hours every day, a junior doctor told Al-Monitor. The young doctor said that most of the complaints were related to gastrointestinal problems due to unhygienic conditions and the drinking of unsafe water. He said he had not seen a single case of a civilian harmed by explosive devices left in homes by retreating IS fighters.

On a visit to a school that had just reopened days before — though some of the classrooms on the second floor are still in rubble — one of the teachers told Al-Monitor that he did not feel safe in the town. "Some of the tribes are with the government and some are not," he noted, adding that he had sent his sons to Turkey during the war because "one is named Omar [a typical name for Sunnis] and the Shiite groups in Baghdad would have killed him."

Reports have denounced extrajudicial killings and torture by Shiite militias of Fallujah men and boys.

In this regard, Jumaili said that "those who committed the acts were infiltrators" and "probably IS" and not the government-aligned Population Mobilization Units.

A university professor from Fallujah told Al-Monitor that a major issue for residents who have not yet come back is that the families of those who joined IS are still not allowed to return. Many, he said, are in Turkey or Erbil, as they do not feel safe in Baghdad.

However, he added, negotiations are underway to enable them to return if they agree to publicly disown their family members who joined IS. The professor declined to respond to questions for greater detail of what this "reconciliation process" would entail.

Jumaili said Nov. 9 that security was optimal, noting that since the city had been retaken, "not a single bullet has been fired in clashes." He added that it was "the best security in 10 years."

Four days after, the two car bombs hit the city, raising the question whether Fallujah will become a safe city in the end.