Egypt moves ahead with nuclear plant to address electricity crisis

Egypt's government is seeking to expedite the construction of a nuclear power plant to generate desperately needed electricity. 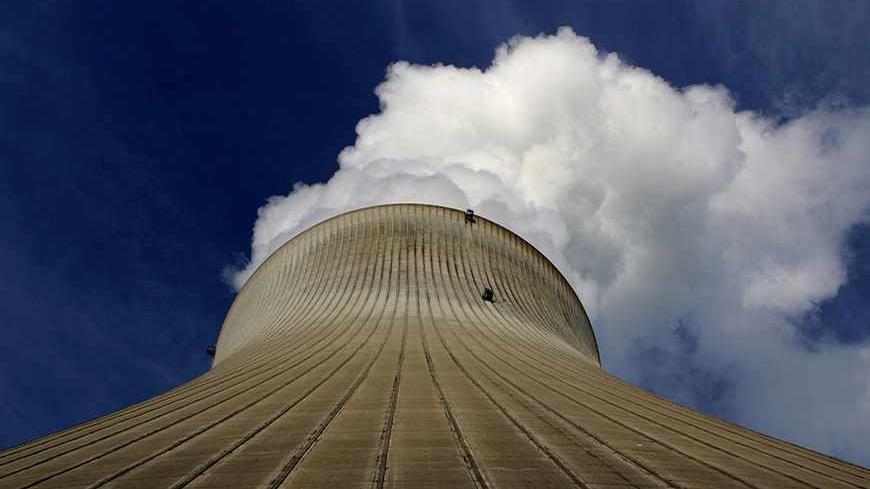 The Egyptian government is taking new steps to implement its ambitious program to use nuclear energy for the generation of electricity after the project had been halted due to security, political and economic reasons as well as popular opposition. - REUTERS/File Photo

CAIRO — The Egyptian government is taking new steps to implement its ambitious program to use nuclear energy for the generation of electricity. This comes after the project had been halted due to security, political and economic reasons as well as popular opposition.

Interim Egyptian President Adly Mansour announced Oct. 6 plans to move forward in inaugurating a nuclear plant in the city of El-Dabaa, to be used for peaceful purposes. He considered it a national priority that would satisfy Egypt’s developmental needs during the coming decades in light of the energy crisis that has plagued the country. According to him, this crisis is due to the lack of fuel needed to generate electricity and the inefficiency of existing power plants. These generate only 30,000 megawatts, which is not enough to satisfy the needs of Egypt, where the amount of electricity consumed per capita is 30% lower than the world average.

Egypt’s entry into the nuclear age began in 1954 during the era of late President Gamal Abdel Nasser, when the country signed its first nuclear agreement with the Soviet Union to build a two-megawatt scientific research nuclear reactor and a radioactive isotope laboratory. Subsequently, the Egyptian Atomic Energy Authority (EAEA) was formed in 1957, but the project was put on hold after the war of 1967, to be reinstated by late President Anwar Sadat after the war of 1973. It was again shelved by deposed President Hosni Mubarak in 1986, following the Chernobyl nuclear disaster and amid growing concerns about nuclear safety.

“We are taking every measure to expedite the tender for the implementation of the El-Dabaa nuclear energy project next January," Egyptian Minister of Electricity and Energy Ahmad Emam explained to Al-Monitor. "There is no intention to issue a decree assigning the project to a specific corporation, and the company that tenders the best financing offer wins the contract, whereby the government will repay financing costs at a later date.”

“The projects aims to generate 5,000 megawatts of electricity from the El-Dabaa nuclear power plant, which will be completed in 2020,” Emam added. He denied claims that political instability or the absence of an Egyptian parliament would affect the date for bidding on the project.

“Egypt is committed to absolute transparency and cooperation in this regard with the International Atomic Energy Agency and all of its international partners,” he said.

A source at the EAEA told Al-Monitor that the government expected to receive offers from 30 international companies for the execution of the project. The actual competition has been limited to 10 companies from six countries: Russia, China, Japan, South Korea, the United States and France.

“The government will meet the $4 billion financing through grants from companies that it will pay back in installments," the same source clarified. "However, the Egyptian government has yet to receive any offers for financing or assistance.” He brushed off criticism that external financing constituted a violation of sovereignty, “as it is the only option available to expedite the completion of the project.”

A delegation from the international consulting firm WorleyParsons visited Cairo in early November and met with experts on nuclear safety. The meeting looked at the technical specifications of the plant’s reactor, the types of the nuclear fuels to be used as well as the security measures to be incorporated in the design, based on the recommendations of the International Atomic Energy Agency and the EU. The minister of electricity and energy is expected to send the ensuing report to Prime Minister Hazem el-Beblawi.

“Based on the available studies at its disposal,” a source at the Ministry of Electricity and Energy told Al-Monitor, "Egypt will specify the purpose of the international tender for building a light pressurized water reactor, which is the safest third-generation type of reactor. The company with the winning bid will have to submit offers to finance 85% of the project cost from foreign sources and 15% from local sources, taking into account that the cost of one reactor is close to $4 billion. The project is expected to make back its cost in a period of five years."

“The tender will include strict conditions that protect against earthquakes and climate changes, specifically high waves of water from the sea. As a result, the consensus is to raise the plant’s walls by more than four meters to block any waves,” the source added.

The Supreme Council of Energy is scheduled to hold a meeting next week, chaired by Mansour, to discuss the nuclear dossier and review the steps being considered to hold the tender to build nuclear power plants.

Egypt also intends to search and mine for uranium in the country’s desert regions. The head of the Nuclear Materials Authority, Nagdi Farag, was reported in Egyptian media to have confirmed that Egypt possesses uranium deposits, but their locations could not be divulged to the public. An international auction is expected to be held for drilling and exploration rights, with the assistance of international experts to ensure Egypt’s proper commercial exploitation of its uranium.

A diplomatic source familiar with Egyptian-Russian relations told Al-Monitor, “Egypt may expand its reliance on Russian expertise in building its first nuclear power plant. The subject was discussed during the recent Egyptian-Russian talks that took place in Cairo on Nov. 14.”

The project to build the first Egyptian nuclear plant was met with overwhelming popular objection by the inhabitants of Mersa Matruh, the city where the nuclear plant is to be built. The site was overrun by residents stripped of ownership of their land for the project after a 10-day sit-in there in January 2011. Part of the plant’s equipment was destroyed to protest the lack of compensation for the land that was expropriated to build the plant.

However, the new political administration in Egypt, which came to power after June 30, struck a deal with the locals that safeguarded the continuity of the project. This occurred following a visit by Defense Minister Abdel Fattah al-Sisi to meet with locals and after he sponsored a national reconciliation effort that convinced them to hand over the El-Dabaa plant site to the Nuclear Power Plants Authority. They were promised that a coastal tourist city would be built for their benefit as a gift from the Egyptian armed forces at a cost of 1 billion Egyptian pounds (about $145.2 million).

The head of the coordinating committee between El-Dabaa residents and the government, Mastour Abu Shukara, told Al-Monitor, “The armed forces promised that they would be responsible for the building of the El-Dabaa nuclear power plant project. We welcome this undertaking and consider the Egyptian army to be the responsible guarantor, as far as we are concerned.

“The residents of El-Dabaa withdrew their demands once we made sure that the building of the tourist city had begun to compensate for our land that was taken. We have no problems with the measures taken by the current government to begin implementing the project, but we still await the conclusion of additional ongoing safety studies, to make sure that there will be no resulting detrimental effects on the local population,” said Abu Shukara.

Egypt’s government still faces many challenges and obstacles that stand in the way of realizing its dream of producing peaceful atomic energy, including the administration's lack of interest in industries and activities related to nuclear power, as well as the continued concern about external meddling that hampers the new auction.