Egypt selected a Russian company to build its long-stalled nuclear reactor, raising controversy about the political dimensions of this coordination. 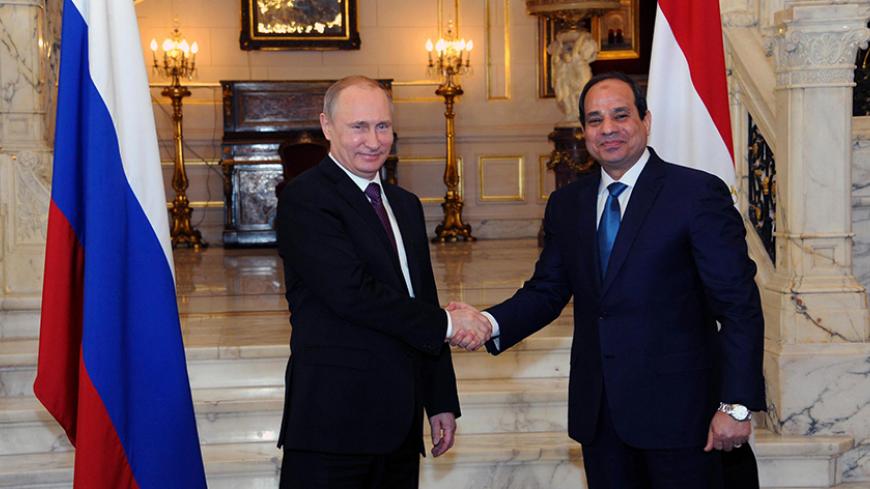 CAIRO — The Egyptian government is about to sign a contract with Russia's Rosatom State Atomic Energy Corporation, which specializes in the manufacturing of nuclear plants, to build the Dabaa nuclear power plant in Matrouh governorate.

The Matrouh governor, Maj. Gen. Alaa Abu Zeid, said on Aug. 26 that Egyptian President Abdel Fattah al-Sisi will lay the cornerstone of the project in October, and Russia will take on the execution of the project.

On the same day, Cairo announced that Rosatom made the best offer from a financial, technical and political perspective, beating offers from other countries, including Japan, France, South Korea and China.

During Russian President Vladimir Putin’s visit to Cairo on Feb. 10, Sisi and Putin signed a memorandum of understanding to build a nuclear power plant in Dabaa, northern Egypt.

Sisi was keen to meet personally with the head of Rosatom, Sergey Kiriyenko, during his visit to Moscow on Aug. 26, to study financial and technical matters that have yet to be resolved before carrying out the contracts, according to the Egyptian president.

According to Egyptian media reports, the Russian offer distinguished itself from the others in seven areas. Most important, the Russian company will produce 100% of the power plant’s components and will not rely on the import of plant components from other countries, some of which may have disputes with Egypt, thus endangering the project. Moreover, there are no political conditions on Egypt for the establishment of the nuclear plant. The Russian company will also establish an information center to promote popular acceptance of nuclear energy. Egypt would have to pay off the nuclear power plant after it is completed and is in operation. In addition, Russian factories will be established in Egypt to manufacture nuclear plant components locally and transfer Russian expertise in this field to the Egyptians.

The Russian offer includes establishing a station with four units of 1,200-megawatt capacity each, at a cost of more than $10 billion.

Since February, Russian energy experts have made several visits to the Dabaa site that was chosen by Egypt as the best place to establish a nuclear power plant — a project that has been in the works since the era of President Anwar Sadat (1970-1981). The project had been stalled during the presidency of Gamal Abdel Nasser (1956-1970).

In regard to the reason for the project having been stalled since its announcement in 1955, Ali al-Saidi, the former minister of electricity and one of the scientists who participated in building the Anshas nuclear research reactor in 1960, told Al-Monitor, “At first, the nuclear project was stopped because of the 1967 war [Six-Day Way], and [the project] was to be implemented with the Soviet Union at the time. … The project was bid upon in the 1970s in a competition between US companies, after US President Richard Nixon promised to provide nuclear plants to both Egypt and Israel. Then a US law was passed obliging countries acquiring nuclear plant technologies to be subject to inspection standards from the country of origin, which is America, so the project stopped.”

Saidi said, “In the 1980s, there was competition between US and French companies. Then came the Chernobyl incident, giving nuclear projects a bad name for the Egyptian public.”

He added that Egyptian decision-makers moved away from the project in the 1990s because of the discovery of gas in Egypt.

“The gas was sufficient to cover the country’s needs for a while. Then in 2006, the idea emerged again and ​​Egypt started its procedures with the International Atomic Energy Agency [IAEA] to build a nuclear plant in Dabaa,” he said.

The Dabaa project is one of the most significant Egyptian national projects that was stalled again under President Hosni Mubarak (1981-2011). There was widespread controversy in the popular and political circles about whether the location was suitable for the project. Egyptian businessmen asked the government to move it to another location so that Dabaa could be used to develop tourism projects. Also, the area’s people held several protests to express their fear of harmful environmental effects.

In 2009, the Egyptian government resorted to an Australian company to review the appropriateness of the Dabaa nuclear reactor. The results of the study prepared by Australian company WorleyParsons were presented to the IAEA, which certified that Dabaa was a suitable location based on meteorological conditions, earthquake risks, groundwater movement, sea currents and tides, as well as demographic studies. But the government did not start implementing the project until the time of the January 25 Revolution.

Saidi expects the Egyptian nuclear power plant to enter service in 2022, for a period between six and eight years. He stressed that Egypt’s nuclear project in Dabaa currently being implemented in cooperation with Russia has a political dimension as well as a technical dimension, because it is considered an extension of the Egyptian-Russian alliance in Nasser's era, when Russia had a long history in supporting Egypt. Russia established the Anshas nuclear research reactor in 1961 in al-Sharqia governorate and contributed to the establishment of the High Dam in the Aswan governorate in southern Egypt.

For his part, strategic and military expert Maj. Gen. Hossam Sweilam said that choosing a Russian company to complete the Egyptian nuclear plant in Dabaa has no political significance. He told Al-Monitor, “The better offer was chosen. Russia will implement [the project] at the lowest price and with the least burden on Egypt. … Six nuclear reactors will be set up in the area. They will allow Egypt to overcome the power outage crisis and help support development projects in the West Delta in Toshka for the cultivation of 540,000 acres, and in east Sinai to reclaim new land.”

On April 16, 2011, Egyptian scholar Farouk El-Baz had expressed in a press statement his concerns of the risks of building an Egyptian nuclear reactor. In this regard Sweilam said, “The Chernobyl explosion did not prevent the rest of the world from using nuclear energy for peaceful purposes. It is used by the United States, Russia and Korea. Why should Egypt be afraid?”

Fulfilling the dream of an Egyptian nuclear project that has been stalled for more than 60 years is no longer a luxury. This project is crucial amid the repeated energy crises that threaten development projects and amid the continuous power outages.