The Egyptian Nuclear and Radiological Regulatory Authority licensed the construction of the first power unit at the Dabaa nuclear power plant, in a step showing that the Russian-Egyptian venture has not been affected by Russia’s war on Ukraine and the ensuing sanctions imposed on Moscow. 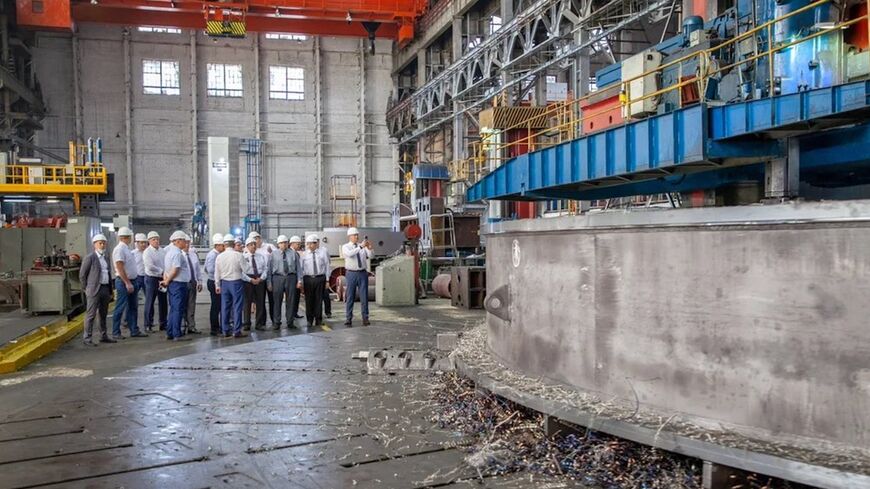 CAIRO — The Egyptian Nuclear and Radiological Regulatory Authority (ENRRA) agreed on June 29 to grant a permit for the construction of the first power unit at the Dabaa nuclear power plant, northwest of Cairo, under an Egyptian-Russian agreement to build the country’s first power plant.

ENRRA said in a statement that the examination, evaluation and inspection that the authority conducted verified the safety of Unit 1 at the Dabaa nuclear power plant and confirmed that there are no risks to humans, the environment or property in the vicinity of the plant.

The issuance of the permit to start the construction of Dabaa plant’s first unit came nearly seven years after the Egyptian government signed an agreement with Russia in November 2015 to construct the first nuclear power plant in Egypt at Dabaa, which aims to generate a total of 4,800 megawatts through four reactors at a cost of up to $21 billion.

In its June 29 statement, ENRRA said that it has taken “the necessary measures to verify that a maximum safety at Dabaa is in accordance with the highest international standards,” adding that these measures included inspection visits to the site to ensure its suitability for construction work.

ENRRA conducts all regulatory and control missions and oversees nuclear activities in Egypt to ensure the safety and security of people, property and the environment from the risk of radiation, according to former ENRRA head Sami Shaaban.

In this context, Maher Aziz, an Egyptian energy expert and member of the World Energy Council, told Al-Monitor, “In order for Egypt and Russia to proceed with the construction of the Dabaa nuclear power plant on the ground, ENRRA had to make sure all safety and security standards are met at the site. Granting permission for the construction of the first unit at the plant is a very important and positive step toward the establishment of the plant. This means that all safety systems have been reviewed and approved by the Egyptian side so that the project’s implementation takes its course.”

However, Aziz criticized ENRRA for delaying its approval to build Unit 1 for about three years. He said, “It was not necessary for the safety systems’ verification to take this long, because the systems according to which Russia’s ROSATOM will operate have proven safe and efficient at several plants it previously built and is currently building elsewhere based on its 3G technology.”

ENRRA said in the same June 29 statement that it has “received a request (from Egypt’s Nuclear Power Plants Authority [NPPA]) to obtain a construction license for the first and second units in mid-January 2019. Over the course of two years, the NPPA completed its procedures by submitting the initial safety analysis report of the first and second units from January 2021 until the end of June 2021.”

The authority added that it is still working on the procedures to license the construction of Unit 2 at Dabaa.

According to a report by the Columbia Center for Global Energy Policy published in May 2021, “In 2021, there were 439 total nuclear power reactors in operation: 38 of them resided in Russia, and 42 of them in operation in other countries were of the Russian VVER type (15 of which were in Ukraine). At the end of 2021, 15 Russian-designed reactors were under construction in other nations.”

Ali Abdel Nabi, former NPPA deputy head, told Al-Monitor, “This approval (to establish the first unit) is a major leap toward fulfilling Egypt’s nuclear ambitions, and we were eagerly waiting for it.”

He added, “This is the result of decadeslong efforts, since late President Gamal Abdel Nasser sought to build nuclear power plants across the nation, but the project was halted for many years due to logistical and political problems (which he did not specify). We were waiting to see the first nuclear plant on the ground in Egypt, and we are close to that at the moment.”

Abdel Nabi explained that “the next step in the Dabaa project will be the concrete cast that will be poured at the first unit’s site at Dabaa, in conjunction with the construction of a concrete structure and the mechanical installations of some equipment.”

Alexey Likhachev, director-general of Russia's state-owned atomic energy company ROSATOM, which is implementing the Dabaa nuclear power plant project, said in a statement on June 30, “Obtaining a construction permit for Unit 1 is a momentous occasion paving the way for the launch of full-scale construction of the first NPP (nuclear power plant) in Egypt.”

“El-Dabaa NPP will be the first nuclear power plant of this generation on the African continent. It will further secure the country’s regional technological leadership,” he added.

In early June, ROSATOM announced the start of production of equipment for Dabaa. The Russian announcement coincided with the visit of a high-level Egyptian delegation led by the head of Egypt’s NPPA, Amgad al-Wakeel, to Moscow on June 1, during which he visited the Leningrad nuclear power plant and Russian factories in the city of Kolpino.

Abdel Nabi stressed that “granting permission to build Unit 1 at Dabaa and manufacturing equipment underscore the Egyptian and Russian serious efforts to complete the plant, proving that the war between Russia and Ukraine did not affect the project’s timetable.”

Paul Sullivan, a nonresident senior fellow with the Atlantic Council’s Global Energy Center, told Al-Monitor that “Russia gave Egypt inexpensive loans and grants to implement the Dabaa nuclear plant. These plants will give Russia 60 to 100 years of influence in Egypt, and by association more influence in countries where Egypt has influence, especially in Africa. ROSATOM is clearly a part of the state apparatus of the Russian government. ROSATOM has been used to extend and deepen the influence of Russia in many parts of the world.”

Commenting on the impact of US and European sanctions on the project, he indicated that “the sanctions imposed on Russia as a result of the war on Ukraine affect all parts of the Russian economy. The strength of the constraints on this project (at Dabaa) by the sanctions is yet to be seen, but it could be considerable. This could slow down the project completion for many years. The sanctions will likely make the project even more expensive to accomplish. Inflation and supply chain issues will do this anyway."

“Egypt can benefit from nuclear power. It is important to know that it has massive solar, wind, geothermal and other renewable energy potential. Egypt needs diversified energy sources,” Sullivan noted.

For his part, Aziz said, “There are many advantages to the Dabaa plant as it will play an important role in diversifying Egypt’s energy sources by introducing the latest nuclear energy technology. This will have a great impact on the country’s industrial community and will raise Egypt’s scientific and technological performance.”