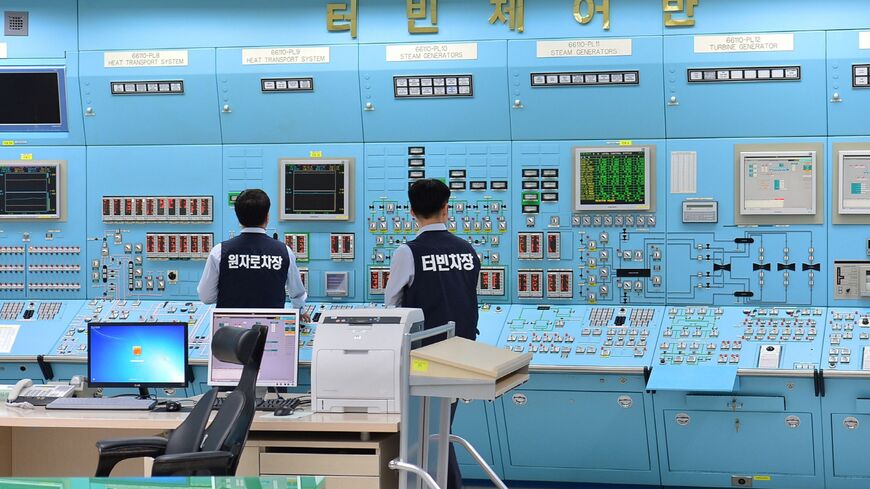 A correspondent in Egypt
September 1, 2022

South Korea will be in charge of constructing turbine buildings for Egypt’s first nuclear power plant in Dabaa, after the state-run Korea Hydro and Nuclear Power secured a $2.25 billion deal from an affiliate of Russia’s state-run nuclear energy company Rosatom.

On Aug. 25, Rosatom,  the contractor for the Dabaa nuclear plant project, signed the contract with Korea Hydro & Nuclear Power Company to cooperate on the construction of the turbines.

In a statement published on its website, Rosatam said, “According to the agreement, the Korean company will construct some 80 buildings and structures at four units of the power plant and will procure and supply equipment and materials for the turbine islands.”

In 2015, Egypt and Russia agreed to build the plant, consisting of four nuclear reactors, with a total capacity of 4,800 megawatts, at a cost of $30 billion. Under the agreement, 85% of the cost will be financed through a Russian loan of $25 billion, with a 3% interest rate.

Also under the 2015 agreement, Rosatom is to construct the Dabaa plant, provide it with nuclear fuel throughout its lifecycle, and provide operation and maintenance support for 10 years.

On July 20, the Egyptian government greenlighted the construction of the first units of the Dabaa nuclear plant.

Speaking at a press conference in Seoul on Aug. 25, South Korean Senior Presidential Secretary for Economic Affairs Choi Sang-mok said that the Dabaa project is South Korea’s largest nuclear power plant export since 2009, when it built the Barakah nuclear power station in the United Arab Emirates.

“We experienced many difficulties in the process of negotiating the contract due to unforeseen variables, such as Russia's war in Ukraine and sanctions against Russia,” Choi added, without diving into details.

Ali Abdel Nabi, former vice president of the Egyptian Nuclear Power Plants Authority, told Al-Monitor, “South Korea excels in managing major businesses and projects, especially in the nuclear field. ... The cooperation with Russia in implementing the Dabaa plant in Egypt is natural to help complete the project within the scheduled time-frame.”

Cyril Widdershoven, a Middle East defense energy analyst and founder of VEROCY, an integrated risk consultancy firm based in the Netherlands, shares the same opinion. He told Al-Monitor, “Cooperation between Russia and South Korea is important for both countries, in light of the current geopolitical situation.”

Both Russia and South Korea "are the best choice for the implementation of the Dabaa plant," he said. "Koreans have great capabilities in construction and management of large projects, and they will be able to implement the project with a high level of efficiency.”

In turn, Abdel Nabi said that Russia “is currently preoccupied with the war with Ukraine and its partnership with South Korea will help it complete the necessary construction for the Dabaa plant.”

According to a report drafted by the Columbia Center on Global Energy Policy in May, “In 2021, there were 439 total nuclear power reactors in operation: 38 of them resided in Russia and 42 of them in operation in other countries were of the Russian VVER type (15 of which were in Ukraine). At the end of 2021, 15 Russian-designed reactors were under construction in other nations.”

Abdel-Nabi also noted that the United States greenlighted South Korea to work at the Dabaa nuclear power plant in Egypt, given the economic sanctions imposed on Russia.

“It is clear that Egypt needed the Koreans to step up. Direct economic repercussions may emerge from working with Russia at the moment amid the economic sanctions signed on Moscow, which target Russian industries,” Widdershoven said.

Sang-mok said during the Seoul press conference that South Korean President Yoon Suk-yeol had instructed relevant authorities to brief the US — which he described as a “nuclear power ally” — on the deal.

He noted that Yoon expressed his country’s commitment to the project in a message to Egyptian President Abdel Fattah al-Sisi.

The South Korean ambassador to Egypt, Hong Jin Wook, said in a statement on Aug. 25 that his country will leverage its participation in the Dabaa plant project to expand its contribution to the development of the nuclear industry in the Middle East and the African continent in the next phase.

Mohammed Soliman, a non-resident scholar with the Middle East Institute's Cyber Program and Egypt Program, told Al-Monitor, “South Korea has a proven track record of delivering highly complex projects. Its potential success in Egypt will help Seoul entrench its position as a reliable partner for other Arab nations such as the Kingdom of Saudi Arabia and the UAE. In terms of their aspiring civilian nuclear programs, Riyadh and Abu Dhabi face the same strategic choices as Cairo.”

He noted, however, that Egypt, which maintains strong bilateral relations with both Washington and Moscow, prefers South Korea. “In the broader Middle East, and particularly in Cairo, Seoul is viewed as a reliable partner in the field of technology and defense. Arab countries can partner with South Korea without antagonizing Beijing and Moscow,” he concluded.