Egypt's Antiquities Ministry has renovated and reopened a museum in a cave used by Erwin Rommel, the Nazi general known as the "Desert Fox," during his campaign against the British in 1942. 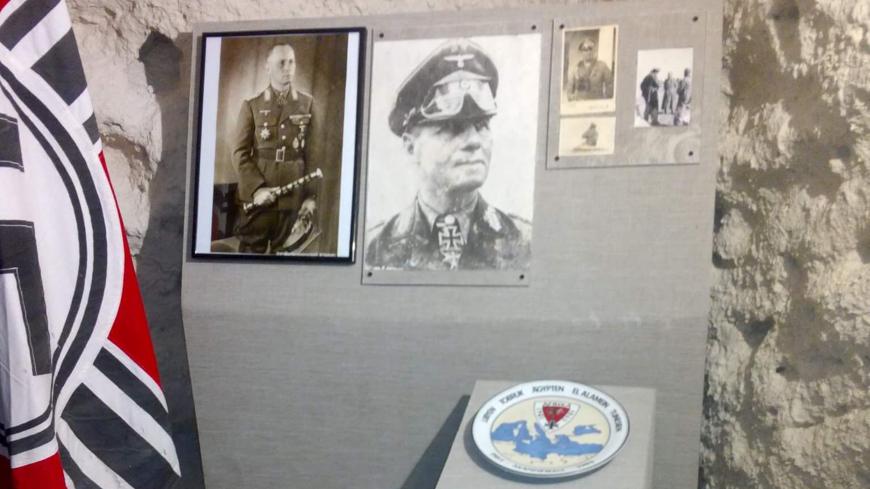 An old field telephone from the 1940s, a Nazi flag and a map of Tobruk greet visitors to the newly reopened Rommel Cave Museum in Marsa Matrouh, one of Egypt's lesser known tourist destinations. The items belonged to Erwin Rommel, one of the most celebrated generals of Nazi Germany until he was implicated in a plot to kill the Fuhrer in 1944. Rommel has long been remembered as one of the few "decent" Nazi commanders, though there is debate over his legacy of chivalry.

Rommel was known to the Germans as “the people’s marshal” and to the outside world as the “Desert Fox” for his surprise attacks and unbroken string of successful campaigns. He defeated the British at Gazala in May 1942, followed by his taking of Tobruk and promotion to field marshal. When the German troops entered El-Alamein, a town in the northern Matrouh governorate and 106 kilometers (66 miles) west of Alexandria, Rommel selected a site in the area’s cliffs as his headquarters, where he plotted military operations against the British forces. The two battles of El-Alamein would end with a German defeat on Nov. 4, after which Rommel dispatched his troops to Tunisia.

Rommel remained a highly regarded figure in the eyes of the Matrouh residents because he respected the customs and traditions of the Bedouins and did not violate the sanctity of their homes, keeping his troops at least 2 kilometers (1.2 miles) from their houses at all times. He also refused to poison the wells against Allied forces on the grounds that doing so would harm the local population. The people of Matrouh honored him by naming a nearby beach after him.

On Aug. 25, Egypt’s Ministry of Antiquities and the Matrouh governorate reopened the Rommel Cave Museum after seven years of closure, following a restoration that cost 2.5 million Egyptian pounds (about $142,000).

In 1977, Egypt and Germany agreed to open a museum that would pay tribute to Rommel and display historical items such as clothing, personal photos, war plans and files on soldiers. Rommel’s son, Manfred, who served as the mayor of Stuttgart from 1974 until 1996, donated some of Rommel's personal belongings as well as weapons and military equipment to the museum. It opened in 1988 and was enriched with new donations in 1991. It was closed in 2010 for extensive renovations.

Ismail Saeed, a restoration specialist with the Supreme Council of Antiquities, who worked on the restoration, said that most of the cracks inside the cave had been fixed. He told Al-Monitor that the cave's historical importance dates back much further than Rommel's time. In the Roman era, it was used to store grain waiting to be loaded onto ships in an ancient Mediterranean seaport nearby.

Matrouh is a destination for many Egyptians and foreign residents who enjoy summer holidays on its soft white sand beaches and clear blue water. Saeed said the museum's reopening will enrich beach vacationers' experiences with history.

The museum's director Mohamed el-Sharkawy told Al-Monitor, “The museum will boost tourism and create archaeological awareness among Matrouh residents.” Matrouh includes other sites such as ruins of the ancient Coptic chapel, but it is far less popular than other Egyptian Mediterranean towns.

Sharkawy said that every October, many Germans and Italians come to visit Matrouh to commemorate the battle of El-Alamein and lay bouquets of roses on their relatives' tombs. He added that the reopening of the museum this year is expected to stir more interest than usual.

The ministry and the local residents hope that the reopening will help boost both domestic and international tourism in Matrouh. At the opening ceremony, Minister of Antiquities Khaled el-Anani lauded plans to develop many of Egypt's other archaeological areas in Egypt and enhance their role in the tourism industry.

But challenges include the many land mines from two world wars that continue to litter the area, including near the Rommel museum.

With an estimated 23 million land mines clustered in very high concentrations, Egypt is one of the world's most mine-riddled countries. “Unfortunately, the land mines impede the development efforts in this area,” Sharkawy said. “So we have to take advantage of any chance to provide income to Matrouh.”