Egypt is constructing a new port city near Alexandria by reclaiming land from the Mediterranean Sea, but the project has sparked fears over negative environmental impacts. 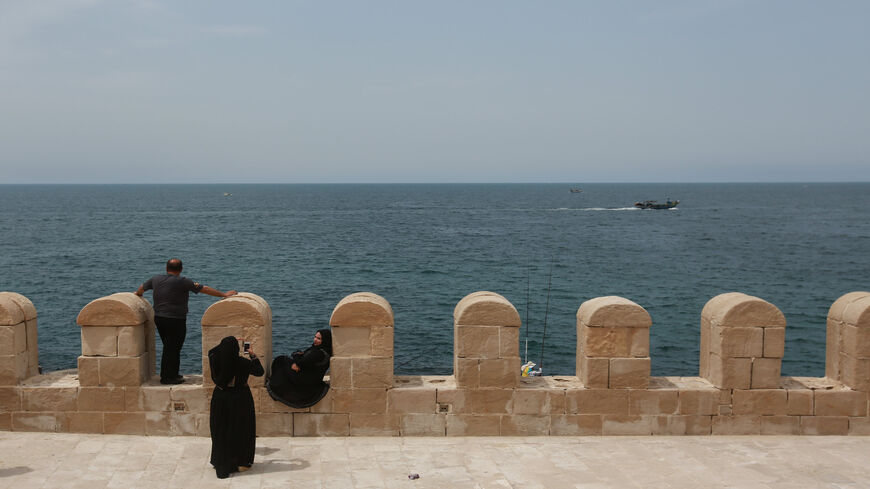 People look out over the Mediterranean Sea from the coastline of Alexandria, Egypt, May 21, 2016. - Chris McGrath/Getty Images

CAIRO — Construction workers and engineers are working day and night, depositing hundreds of tons of soil into the sea to lift a brand new city out of the Mediterranean.

Called "New Abu Qir," it is being built east of the northern coastal city of Alexandria.

The reclaimed part of the sea where the city will be built will be 5 million square meters (1,235 acres), enough to accommodate the housing, tourist and commercial projects planned by the Egyptian government for the new city.

This is a multibillion-Egyptian pound investment, involving several local and foreign contracting, planning and construction companies, which are coming together to create an urban-commercial-tourist community that will be unprecedented in the country and in Africa.

"This is a very important project that will put Alexandria once more on the international tourist and investment map," Abdel Fattah Yahia, member of the House of Representatives (lower chamber of parliament) from Alexandria, told Al-Monitor. "It seeks to benefit from the wonderful location of Alexandria as one of the most important cities on the Mediterranean."

The new community is Egypt's latest attempt to make the best use of the location of Alexandria, the nation's most famous summer destination for local tourists, which boasts its own port, one of the oldest on the Mediterranean.

The government is implementing a large number of projects in the northern coastal city to bring it back on the national and international tourist map, after decades of neglect.

New Abu Qir will be Egypt's answer to Jumeirah Islands in the United Arab Emirates (UAE) and other multibillion-dollar island cities in the Gulf.

In late November, the Egyptian Ministry of Housing signed a contract worth $807 million with Etimad Holding, a leading UAE company specialized in security and public safety, to carry out the basic infrastructure of the new city.

The company, an arm of the Abu Dhabi Investment Authority, will carry out these works over the next 36 months. It will enlist support from some local and international companies that have already started operating on the location of the new city.

The new city will have a port with the largest container handling terminal in the region, with an annual capacity of 2 million containers.

The port and the new terminal will be an addition to Egypt's ports that are now at the center of a $4 billion-dollar upgrade program that aims to turn Egypt into a main trading and logistics center in the region, capitalizing on the Arab country's location along the route of the international maritime movement and world trade.

The construction of the new city comes at a time Egypt seems to be setting its eyes on mimicking and also outrivaling the construction boom taking place in Gulf states, including in the UAE.

Egyptian construction engineers and workers are credited for designing and constructing most cities and major projects in Gulf states, at a time Egypt suffered its own economic slump.

Now, however, Egypt seems to be reawakening and trying to make up for the time it lost as far as its rebuilding is concerned.

The populous Arab country is constructing a large number of new cities and urban communities to redistribute its population and create more space to accommodate its runaway population growth.

But as it does this, it wants to have credit as home to the "first of a kind," "tallest" or "largest," adjectives that precede most construction and development projects in the Gulf.

"Egypt races against time to compensate the time it lost because of the events it witnessed over the last few years," Mahmud Makhlouf, a construction engineering professor at Cairo University, told Al-Monitor. "This is why the country initiates major construction projects that amount to a construction revolution."

New Abu Qir will consist of educational facilities, tourist projects, commercial markets, restaurants, hospitals, recreational facilities and high-rises, according to local media reports about the government's blueprint for the city.

People with knowledge about the new city have hopes that it will function as a new investment magnet, especially attracting investments from Gulf Arab states that have financial surpluses.

"We expect the new city to attract major real estate, industrial and commercial investments," Abdel Fattah Yahia said. "The city will be at the center of all services, especially with a large number of important road and transport projects being implemented around it."

Egypt has been working hard to attract international investments, especially ones that add value to its economy and contribute to the transfer of technologies to it.

The ongoing construction boom has turned the real estate and construction sector into an investment lodestone.

Apart from the desire to change Egypt's demographic map and more fairly distribute its population, the same construction boom thrives on the presence of heavy demand for real estate in a country whose population increases by 1.88% every year.

This is why the local real estate sector is also attracting major real estate and construction companies in the Gulf.

Economists like Fahmi expect the same considerations to attract major real estate companies to the new city being constructed now east of Alexandria.

However, the construction of the city, which will be an extension of the Abu Qir Bay in Alexandria, is being tainted by environmental fears, with some environmentalists expressing concern over the reclamation of parts of the Mediterranean Sea coast.

This reclamation, they say, would contribute to the partial destruction of marine life in this part along the Egyptian coast and cause undesirable changes to marine conditions in the area.

"This project will destroy marine life in the area and consequently cause environmental catastrophes," Emad Eddine Adli, head of Arab Office for Youth and Environment, a nongovernmental organization, told Al-Monitor. "Environmental risks from the project will be even higher if proper studies are not made about its possible impacts."

Egypt has been demonstrating growing interest in environmental protection, manifested in the Arab country's development of a strategy for increasing dependence on renewable energies and mitigating the effects of climate change.

The same interest is also evident in Egypt's efforts to reduce emissions, including industrial ones, as well as transport emissions.

According to those advocating the project, the reclamation of parts of the Mediterranean has been thoroughly studied before starting the construction of the new city.

"State agencies conducted sufficient studies on the project before embarking on its implementation," Abdel Fattah Yahia said. "These studies included an environmental assessment that showed the project will not have any negative impacts in the area."