Defense Minister Benny Gantz and his Blue and White party did not realize in time that the trial of Prime Minister Benjamin Netanyahu would also hurt them. 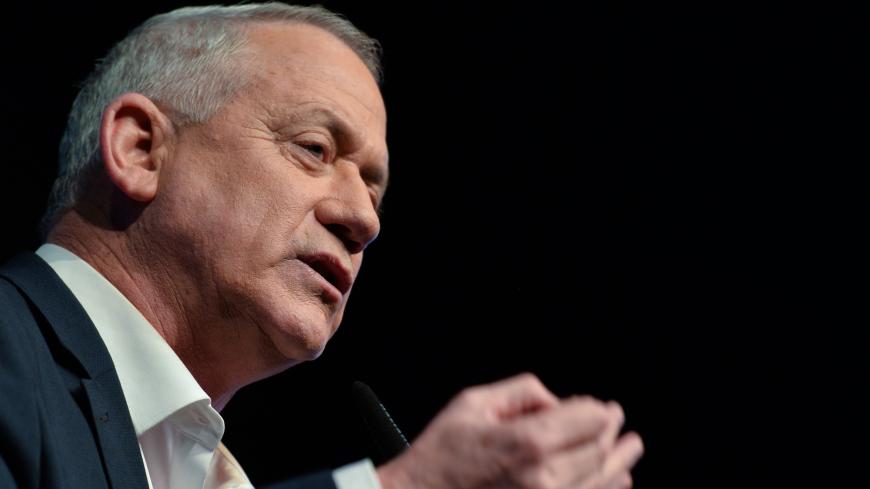 Corruption and nepotism
Courts and the law
May 26, 2020

In his worst nightmares, Blue and White Chairman and Defense Minister Benny Gantz could not have imagined the major damage that would be inflicted on him on the opening day of Prime Minister Benjamin Netanyahu’s trial on May 24.

Netanyahu delivered his “J’accuse” speech on a live broadcast to the cameras only moments before he entered the Jerusalem District Court. It was his indictment of Israel’s law enforcement system, which he accused of persecuting and “framing” him. For several but seemingly endless minutes, while standing in front of mask-wearing silent Likud ministers, the prime minister hurled poison darts at the police and the state prosecution office.

True, Gantz took into account that the day would be a difficult one for him on both the public and political levels after he had promised not to be part of a government headed by someone accused of bribery. True, Gantz had disappointed and even betrayed hundreds of thousands of supporters. Now he had not only made a political alliance with the accused defendant but also found himself trapped between his promises to defend the legal system and the necessity of retaining a cordial relationship with the defendant.

On the morning the trial started, Gantz consulted with his people. The decision was for Gantz to keep a low profile with the media throughout the day.

This strategic choice was the result of a tense tete-a-tete between Gantz and Netanyahu on May 21, three days before the opening of the trial and less than a week after their coalition government had been sworn in May 17. Within this short time period, arm-twisting and a tug of war had already emerged between Blue and White and the Likud.

The day before Gantz and Netanyahu were due to meet, Gantz was interviewed by the prestigious Israeli television program “Fact” [“Uvda”]. When Gantz was asked about his violation of his main electoral promise not to ally himself with someone indicted for criminal offenses, he answered, “I did not come to serve Netanyahu, I came to serve the State of Israel.” Then Gantz was asked whether he had questioned Netanyahu about whether the prime minister would do something to get out of the trial, and answered, “I asked him if he was going to trial, and he said yes.” “And you believe him?” the interviewer pressed. Gantz answered, “You know, next week we’ll have the answers.”

Netanyahu was angry over what Gantz said, and especially what he implied. Netanyahu got the impression that his new partner in leading the state was purposely putting the prime minister in an awkward position in order to create a noble and exalted image for the Blue and White leader.

When Gantz arrived at the May 21 meeting, Netanyahu already knew that he would be forced to appear at the Jerusalem District Court for the opening of his trial. The prime minister had asked the judges that he be exempted from making this appearance, citing the high expenses involved in security, but was turned down.

When Netanyahu met with Gantz, the prime minister made it clear that Gantz was not to attack or criticize him in the media. According to members of Netanyahu’s inner circle, the prime minister did not make concrete references to the interview or the upcoming trial, but talked in general that the two of them must not criticize each other in the media. The message was clear, as was the veiled warning.

Gantz internalized the message and also instructed the Blue and White ministers to refrain from interviews and announcements to the media regarding Netanyahu’s trial. In internal talks, he asked his people to empathize with Netanyahu’s supporters, for whom the opening day of the trial was a difficult and sad blow.

Under Gantz’s orders, all Blue and White members were to refuse interviews from the morning of May 24. The party’s ministers appeared at the first working meeting of the unity government, which was convened only a few hours before Netanyahu entered the Court Hall.

When Gantz and the Blue and White ministers got reports on Netanyahu’s show just before entering the courthouse, they were shocked. Under no circumstances had they dreamed that the prime minister would turn the opening day of his trial into a media event, the likes of which had never been seen in the State of Israel. This embarrassed them greatly, and thrust them into the horns of a dilemma.

At first, they kept quiet. But the media criticized the silence on the part of the Blue and White chairman and his ministers. After some time passed, Gantz publicized the following very weak response: “Like any other citizen, the prime minister is also entitled to be presumed innocent, and I am certain that he will receive a fair and just trial from the legal system.’’ Not a word of criticism was heard from Blue and White regarding Netanyahu’s scathing offensive against the police and the prosecution. Even new Justice Minister Avi Nissenkorn of Blue and White maintained a low-key tone; he coordinated his response with Gantz and, like the Blue and White leader, also emphasized the prime minister’s presumption of innocence.

So Gantz found himself in the same boat as Netanyahu and the senior Likud members, under the same toxic cloud disseminated by the prime minister. All of Gantz’s promises to guard the legal system from inside the government, to build an invincible wall protecting the legal system — disappeared into thin air.

The one to take advantage of the weakness and silence of Alternate Prime Minister Gantz was Gantz’s former partner, opposition leader Yair Lapid, who endlessly tweeted and spoke out in interviews against both Gantz and Netanyahu. Lapid accused Netanyahu of a coup and of attempting to eliminate democracy, and criticized Gantz and Blue and White ministers for collaborating with the prime minister. Speaking on May 25 to his Knesset faction, Lapid said, “After all their promises to protect the legal system, yesterday Benny Gantz and Gabi Ashkenazi chose to remain silent. Is there any principle at all for which you are willing to fight for?”

This was Gantz’s baptism of fire in the emergency government. A Blue and White minister told Al-Monitor, on condition of anonymity, that it was much harder than they had expected. “We never anticipated such a scenario. We said: Netanyahu will reach the courthouse, there will be photographs, a lot of noise, OK. But suddenly he stood up and fired his shots, and we couldn’t do a thing in response.”

Blue and White hopes that Netanyahu’s trial will not make many headlines over the coming months. That is because the assessment is that the prime minister won’t be called to make an appearance in the court for many months.

Still, Gantz and his people are beginning to understand that Netanyahu’s court case can prove to be very destructive for Blue and White’s public image. Of course, this has basis in reality: Netanyahu fired the opening shots of what may turn into a protracted legal battle, in which he’ll use all the tools at his disposal. Gantz will have to be a political illusionist to survive all the flak, while Lapid breathes down his neck and reminds him of his promises.