Facing a panel of three judges, Prime Minister Benjamin Netanyahu is the first incumbent leader of Israel to stand trial. 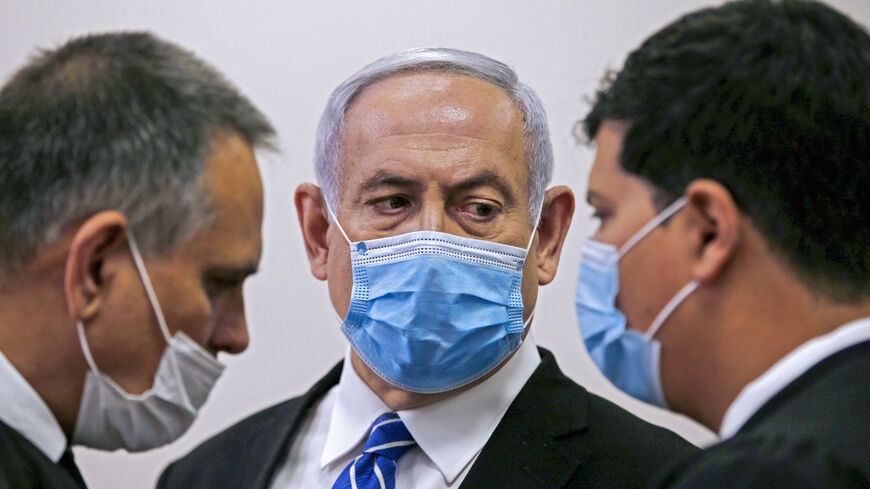 Israeli Prime Minister Benjamin Netanyahu (C), wearing a protective face mask, speaks with his lawyer inside a courtroom at the district court of Jerusalem, during the first day of his corruption trial, May 24, 2020.

Entering the Jerusalem District Court today for the opening of his trial, Prime Minister Benjamin Netanyahu slammed corruption charges against him and attacked elements within Israel’s political left, the police and state prosecution. Netanyahu described the charges he faces as "slanderous and delusional,' stating that "the objective is to topple a strong prime minister from the rightist camp and thus to remove the right wing from leadership for many years.' He also demanded that the court sessions be broadcast live.

Israel’s prime minister was indicted last January in three separate cases for fraud, bribery and breach of trust, almost four years after the start of police investigations against him in June 2016. His trial was originally set to open on March 17, shortly after the March 2 elections, but was delayed due to the coronavirus outbreak and the ensuing restrictions on the operation of the courts.

Facing his three judges in courtroom 317, Netanyahu was read the letter of indictment. He then had to confirm verbally that he understood the charges against him. All in all, the procedure lasted for about 1½ hours.

Netanyahu was formally indicted in January 2020 in three cases: Case 1000 involving allegations of receiving gifts from businesspeople in exchange for favors; Case 2000 about allegedly plotting with Yedioth Ahronoth owner Arnon Mozes for a positive coverage deal; and Case 4000 that relates to his contacts with telecommunications tycoon Shaul Elovitch. Elovitch and his wife Iris, as well as Mozes, are also accused in this trial, and were present today in the courtroom.

Because of the coronavirus threat, each of the four accused appeared in the courtroom with one lawyer only at his side. A limited number of journalists were allowed in an adjacent room in the courthouse building to follow along with the proceedings on a screen. Netanyahu had asked last week to skip his court appearance at the opening of the trial, arguing that the procedure was technical in nature and the cost of security for his arrival in person would be enormous, but the court rejected his demand.

Several hours before the opening of the trial, hundreds of demonstrators for and against Netanyahu faced each other in two locations — outside the prime minister’s official Jerusalem residence and outside the Jerusalem courthouse. Some Likud ministers, including Public Security Minister (and former Justice Minister) Amir Ohana, also arrived to the courthouse in a show of support for the prime minister. Netanyahu himself has repeatedly accused the legal system and the media of persecuting him. He is now the first premier in Israel's history to stand trial while in office.

After the court session ended, Defense Minister Benny Gantz, Netanyahu’s ally in the unity government, tweeted, "As any other citizen, the prime minister is also entitled to be presumed innocent, and I am sure that he will receive a fair and just trial from the legal system. I hereby repeat and emphasize that me and my friends trust fully the legal and law enforcement system."