Netanyahu conducting his trial outside courthouse

Israeli Prime Minister Benjamin Netanyahu intends to play for time and drag the trial against him for many months and perhaps even years. 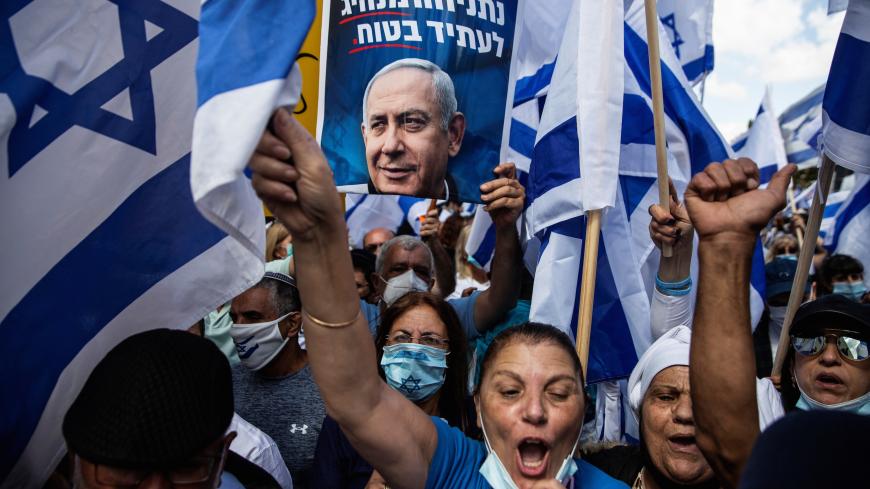 Supporters of Israeli Prime Minister Benjamin Netanyahu take part in a protest outside the prime minister's residence, on the day when Netanyahu's corruption trial starts, Jerusalem, May 24, 2020. - Heidi levine/Pool via REUTERS

A scene that was once deemed impossible was captured on film May 24. Israeli Prime Minister Benjamin Netanyahu chaired a Cabinet meeting in the morning and appeared in court before three judges in the afternoon. The omnipotent leader of Israel already broke Israel’s first Prime Minister David Ben-Gurion’s record by governing for 11 consecutive years — and 14 years in total. Now, however, he was standing trial on charges of bribery, fraud and breach of public trust. From that moment onward, Israel was facing an unprecedented situation: The state itself was pressing charges against the man who leads it.

There can be no doubt that the only person who could generate such a scenario without blinking an eye is Netanyahu himself. As of now, this image will be part of his historic legacy, overshadowing all his other activities and achievements. In the upcoming year and a half, before he is slated to hand his position over to Defense Minister Benny Gantz, Netanyahu will make the most concerted effort of his life to overturn this legacy and create one that is far more distinguished. He wants to enter the history books, not prison.

Netanyahu keeps raising the ante almost daily. Anyone who thought that once he appears before the court he would lower his head, if only for show, and follow the rules of the game was proved wrong — and in a big way. Netanyahu showed up on the steps of the Jerusalem District Court around 2 p.m. local time, an hour before the trial was supposed to start. This in itself was unusual for him. And he showed up with a contingent of people eager to defend him. He was surrounded by Likud ministers and Knesset members and others close to him, all of them hiding behind surgical masks. They showed up to declare, “We are on trial too.”

Still, Netanyahu did all the talking. He gave a long, bellicose speech, lashing out with the harshest accusations at each stage of the investigation against him. He attacked everyone from the police to the state prosecution office, to Attorney General Avichai Mandelblit. With great elegance, he ignored the fact that he himself had appointed most of his investigators, the police chief and attorney general, among others, to their posts — people considered close to him, both politically and ideologically. Instead, Netanyahu wove a fantastical conspiracy theory, in which an “invisible hand” turned the entire Israeli law enforcement system into a mechanism in the service of darkness, operated remotely, with a single mission: to remove Netanyahu from office.

The low point came when Netanyahu brought up the horrors of the Holocaust in his defense. He quoted Holocaust survivors, who supposedly called him before he arrived in court to say, “We were in the forests in Europe, and we are praying for you. The wolves are coming to devour you.” It was Netanyahu at his best, plucking at all the darkest heartstrings of the nation and waving about its most sacred legacies on his own behalf. Nothing is out of bounds when it comes to achieving his objective, in this case, expediting the process of delegitimizing the entire legal system, continuing his scorched earth policy, and waging the total war he declared against all those who are trying to harm him.

Netanyahu is a talented man. He is highly intelligent, and he is experienced. He knows that the brutal attacks launched by him and his messengers against Israel’s legal system will not help him inside the courthouse. If they will have any impact at all on the three judges, it will be negative. But Netanyahu is no longer the master of his fate. He knew that everyone was waiting to see the photos of him sitting in the docket in all his disgrace, so he decided to create a victory photo — a photo of him standing on the courthouse stairs like some modern-day Alfred Dreyfus, delivering his “J’accuse” speech, based on half-truths, lies and irrelevant facts, while flailing about wildly and blaming everyone except himself, of course.

Netanyahu knows exactly what he is doing. Prevailing assessment is that he is intentionally boosting his popularity among half of the Israeli public, i.e., the right-wing camp. Sitting before his judges, he is no longer the master of his own destiny. They are. But as tensions swell in the street, and the mass protests get increasingly vociferous, as long as he maintains his political power, Netanyahu will at one point be able to negotiate with the attorney general over a plea deal that does not include any jail time and with conditions that are more beneficial to him.

That is Netanyahu’s strategy. With it, he may win the upcoming battles, but there is also a reasonable chance that in the end, he will lose the war. At his trial, former President Moshe Katzav also decided to go to war, and waited until the last minute to cancel a plea deal with no prison time, which was offered to him by the prosecution. This decision eventually buried Katzav. He was convicted of sexual harassment and received a long prison sentence. Netanyahu knows that as of May 24, he can find himself in prison, too. This is yet another image that is still inconceivable to the Israeli public. “King Bibi” in an orange prison uniform? After everything we have seen today, never say never!

What happens now? The attorneys representing Netanyahu — who is being tried along with publisher of Yedioth Ahronoth Arnon Mozes and former head of the Walla website Shaul Elovitch — are playing for time. Yesterday, they asked for a continuance of at least two months until the next hearing and many more months until the evidentiary stage of the trial. Netanyahu’s strategy is to wait until mid-2021 before beginning the evidentiary stage, which would mean that he would return to the prime minister’s office again, after Gantz completes his anticipated term. His trial will still be underway then, he hopes.

Facing off against this strategy are three judges with a reputation for toughness. It is hard to imagine that the panel of judges, headed by veteran Justice Rivka Friedman-Feldman, will allow Netanyahu and his lawyers to drag the trial out for years, before reaching a verdict in the first proceeding. All indications are that the judges will order a quick trial consisting of three sessions per week in order to finish the initial proceedings two or three years from now at most.

As far as Netanyahu is concerned, this is yet another stage in an endless war, in which he is the perpetual underdog, even if he is a prime minister, who can do whatever he wants. Regardless, everyone is against Netanyahu, and Netanyahu is against everyone. So far, he has always been the winner. This time, however, it looks like victory is not up to him — no matter what he does. There are other factors at play here, and he has no control over them.