Netanyahu pushes for evidentiary stage to be postponed until after election

The legal defense team of Prime Minister Benjamin Netanyahu tries postponing the evidentiary stage of his trial until after the March 23 election. 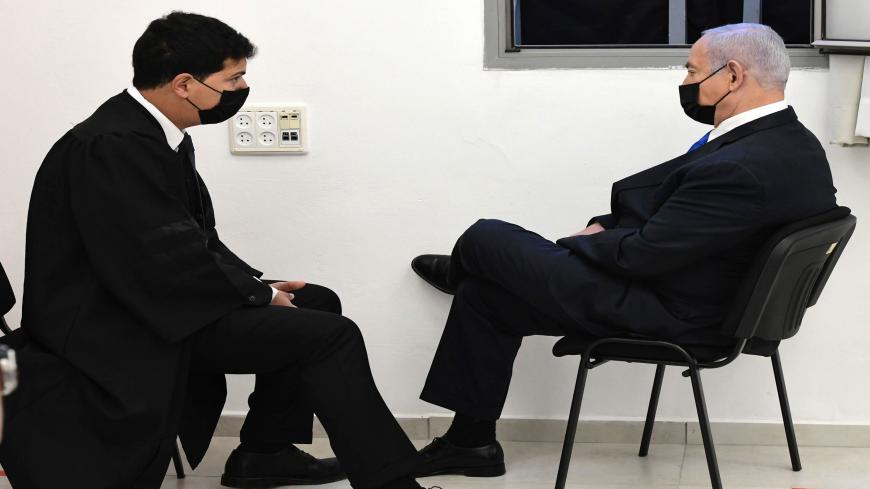 Israeli Prime Minister Benjamin Netanyahu (R) talks to his lawyer ahead of a hearing in his corruption trial at the Jerusalem District Court, Jerusalem, Feb. 8, 2021. - Reuven Castro/POOL/AFP via Getty Images

Prime Minister Benjamin Netanyahu is fighting from doorway to doorway, refusing to cede a single stronghold. He and his defense team are conducting a determined war of attrition in order to play for time, score points and continue battering and exhausting the prosecutors in the hopes that something will give — the indictment will collapse, the judges will accept the defense arguments.

On Feb. 8, Netanyahu and his legal team arrived to the Jerusalem District Court for the last pre-trial hearing. Netanyahu pleaded not guilty. After that, the court was set to schedule the beginning of the evidentiary stage. Then, Netanyahu’s lawyers asked for the next session to be postponed for after the March 23 elections. Judge Rivka Friedman-Feldman, who presides over the three judge panel in Netanyahu’s trial, was unhappy with the request. “In essence, you [Netanyahu’s defense team] are asking to defer the evidentiary stage by six months. We should have heard evidence long ago. Why are we seeking to press on, you ask? Because it’s been a year since the indictment was filed,” she noted.

The trial had begun on May 24, 2020. Following various pre-trial motions and procedural delays, it resumed only on Feb. 8. This was to be the final stage before the main act: The evidentiary stage in this fateful legal drama when prosecution witnesses are scheduled to take the stand one by one to testify against him. As expected, Netanyahu denied the charges against him. He argued that not only was he innocent of all three unfounded charges — corruption, fraud and breach of trust in three cases — he was being framed based on a police investigation that had not been authorized legally by the attorney general. Throughout the lengthy hearing, his lawyers bombarded the judges with various and sundry arguments, which peaked with a demand to delay the evidentiary stage of the trial until after the elections.

A prelude to this demand was provided the day before by Knesset Speaker Yariv Levin, one of Netanyahu’s staunchest loyalists — the man who heads the legislative branch of government. Levin conveyed a barely veiled threat to the judges, arguing that if they schedule the evidentiary phase to begin prior to the elections, they could be influencing the democratic process.

This is the state of play in the trench warfare underway, with Netanyahu intent on distancing the evidentiary stage as far as possible from election day, while the prosecution is fed up with the attrition and delays intent on putting its witnesses on the stand before anything happens to set back their case.

The plot thickened when it transpired that one of Netanyahu’s attorneys, Boaz Ben Tzur, had been in contact with Israeli-American billionaire Arnon Milchan, and had suggested that he contacts Netanyahu. Ben Tzur currently represents Netanyahu in Case 1000. But in the past, Ben Tzur represented Milchan, in connection to one of the other cases Netanyahu was indicted on (Case 4000). In fact, Milchan could be called to witness against Netanyahu. The prosecution issued a stern letter to Ben Tzur, warning that it would take action against him on suspicion of witness tampering. Ben Tzur responded with an angry letter of his own, denying the allegation.

Channel 12 News reported Feb. 7 that Milchan had apparently tried to call Ben Tzur recently, but had dialed by mistake a different Boaz on his contact list — this one an investigator in the serious crime unit that investigated the Netanyahu-Milchan case. This slip further strengthened the prosecution’s suspicions that Netanyahu or someone acting on his behalf was trying to influence the prosecution witnesses and destroy the state’s case, making the start of the evidentiary stage of paramount importance to the state’s case.

Others have a different take on the issue. They argue that Netanyahu is by far the best actor in the Israeli political arena and that the start of the evidentiary stage close to election day could actually benefit him rather than harm him. According to this theory, voters are familiar with the cases against Netanyahu and support for him has remained steady through three consecutive elections. The case has been widely covered in the media, including extensive reporting of witness statements against him, and will not surprise his supporters. On the contrary. They could achieve the opposite effect of presenting Netanyahu being haunted by the prosecution over such “nonsense” as accepting a few cigars and champagne and some “positive news coverage” while he was wholly devoted to bringing Israel millions of coronavirus vaccines and saving lives. The evidentiary stage, argue some of his consultants, could help shore up support for the beleaguered leader among his voters who will close ranks to defend him.

This argument — dubbed “the second Israel” theory — has been propounded in recent months by various journalists who claim the Netanyahu trial is an attempt by the Israeli elites, the political left and other anti-Israel forces to get rid of the “great defender” of the Jewish people. Netanyahu, who has become adept at exploiting the criminal indictments against him to deepen Israel’s social divide, could leverage the evidentiary stage in order to turn the elections into a class war of sorts.

Truth be told, despite his elitist, Ashkenazi upbringing and background, Netanyahu has been immensely successful in depicting himself as the ultimate representative of the “second Israel,” of Mizrahi Jews whose families originate from Arab lands, of right-wing ideologues. He depicts himself as an underdog hounded by a “deep state” of progressives, leftists and post-Zionist forces determined to topple him from power. The trailer for such a scenario was on display Feb. 8 when his admirers said that photos of Netanyahu depicting him sitting with his lawyers outside the courtroom, awaiting the start of the proceedings, amounted to public humiliation of a beloved leader.

This is all diametrically opposed to the truth. Netanyahu’s predecessor, Ehud Olmert, was also indicted on corruption charges, standing trial and going to jail without anyone claiming he had been a victim of some nefarious plot and without any attempt to sow public discord. Netanyahu’s fans either do not remember Olmert or choose not to remember him, or former Finance Minister Avraham Hirschson or other politicians tried and punished in the past. Netanyahu’s fans are intent on saving the prime minister, at any cost. Netanyahu is a master at maneuvering and manipulating them. He, too, is willing to pay any price to evade Judgment Day. Anyone who holds Israeli democracy close to their hearts should be very worried.