Netanyahu sees last, best chance in fourth round of elections

Prime Minister Benjamin Netanyahu clearly feels that new elections are his best option, but don't expect him to make his move until the Aug. 25 budget deadline. 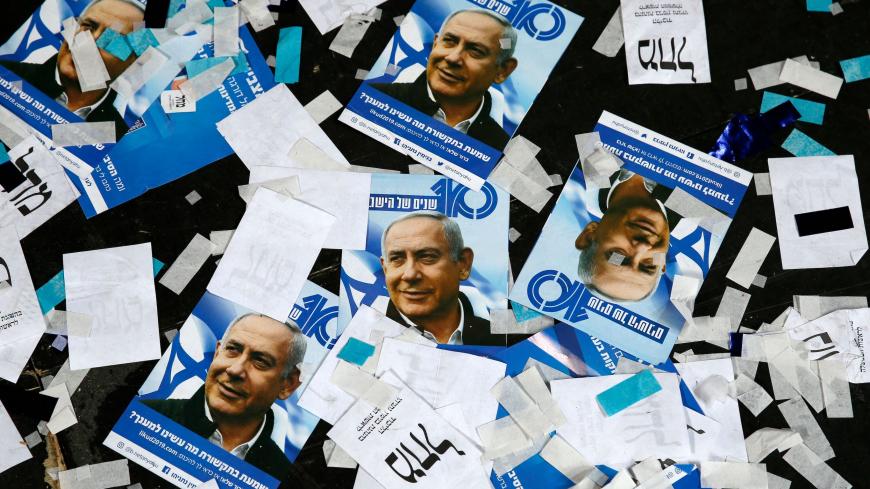 Last week, Prime Minister Benjamin Netanyahu seemed determined to avoid new elections. Toward the end of this week, Netanyahu seems to be driving just as energetically toward the ballot box.

Netanyahu has left himself an escape hatch and could still stick with the current government. But he has evidently concluded that elections later this year are the lesser evil. In 2021, his situation could be much worse. It's better to take the risk now and cut his losses than to find himself trapped in an unholy marriage with Defense Minister Benny Gantz and forced to hand over the premiership to him in November 2021 as per their deal — or find an excuse to call elections next summer under far worse circumstances.

What changed between this week and the last that Netanyahu would make an insane gamble, dragging a divided and economically battered Israel into its fourth election in 18 months? It's the timetable set by the judges presiding over his corruption trial. In a July 19 technical discussion regarding the upcoming evidentiary phase, Jerusalem District Court Judge Rivka Friedman-Feldman, who heads the three-judge panel, ruled that starting in January, the prime minister would have to present himself in court three times a week. While she acceded to a request by Netanyahu’s lawyers to postpone the evidentiary phase until January to give them time to study the evidence, she set a fast-paced, grueling trial schedule.

As the week wore on, Netanyahu seemed to realize that next year, he would be a far lamer duck than he is now. Not only does the economic crisis seem here to stay for the foreseeable future, and not only have COVID-19 infections resurged with a vengeance and prompted widespread finger-pointing at Netanyahu’s failed crisis management. Nore so, not only is there a fair chance that the occupant of the White House will be Joe Biden rather than Donald Trump, but Netanyahu will find himself in an awkward position. The prime minister will have to spend endless weeks facing his judges, inevitably prompting calls and petitions demanding that he declare himself temporarily incapacitated and step aside.

At that point, Attorney General Avichai Mandelblit will likely have to render an opinion on the issue. Netanyahu has painted Mandelblit as a nemesis intent on unseating him and is convinced he will find him unfit to continue governing the state while conducting his trial. It is Netanyahu's worst nightmare, which he is trying to avoid via renewed elections.

Under Israeli law, a prime minister can remain in office even after being convicted as long as he has not exhausted all venues of appeal. Even if the Jerusalem District Court convicts him of bribery, fraud and breach of trust, he could still appeal to the Supreme Court and theoretically keep his seat. But Netanyahu must fear that the public's growing animosity could turn into full-blown revolt when he starts spending three days a week in court from morning to late afternoon and another two consulting with his lawyers. Netanyahu knows that should calls for him to step aside intensify, he will be unable to count on the attorney general or the top court to protect him, even though it did rule in his favor on a petition against his retaining his post after indictment.

Netanyahu’s coalition agreement with the Blue and White Party automatically triggers his job switch with Gantz on Nov. 22, 2021. When the government was installed in May, Gantz was sworn to that future post in advance. The rotation pact leaves Netanyahu only one way out: the Knesset's failure to approve the state budget, which by law would bring about the dismantling of the Knesset, and of the government by definition, but leaves Netanyahu in office for at least three months until new elections are held.

Gantz should have been immune to such machinations, protected by the coalition deal stipulating that the government would push through a two-year budget. Then Netanyahu started insisting on a one-year budget in violation of the agreement. His official rationale was the uncertainty created by the coronavirus pandemic hampering the planning of next year’s budget. Gantz, however, is adamant about a two-year budget, knowing that if he gives in to Netanyahu and the Knesset approves a one-year budget, Netanyahu could find a way next year to prevent its approval, automatically triggering the dismantling of the government and keeping him in office until a vote. The deadline is inviolate: Aug. 25, after which the Knesset is automatically dispersed and new elections are set, unless the Knesset votes itself a two-month deadline extension.

Netanyahu is clearly no longer interested in next year’s loophole, as his electoral prospects could deteriorate further by then. Recent polls place him on a downward trajectory — from a high of 41 Knesset seats for his Likud just one month ago to 32 or 33. The public gives him “poor” and “failing” grades for his handling of the coronavirus crisis and Netanyahu knows the chances of reversing this trend are slim. His only option is to use what is left of his equity in hope of achieving what he has failed to do in three previous elections — garner a 61-seat majority for his party and its right-wing and ultra-Orthodox allies.

Most of the support he has lost in recent weeks has trickled over to the Yamina Party of Naftali Bennett, a bearable shift. He knows that Bennett, currently surging in the polls from his seat in the Knesset opposition, would not cooperate with center-left parties and would eventually return to the fold of the Likud-led right. He knows his rivals are still in disarray and that Blue and White’s disastrous polling (down to nine seats from the 33 it won in the March elections) means there is no viable candidate at this time to challenge his leadership. It’s now or never.

Netanyahu will keep all his options open until the last minute, as he always does. He will keep testing the waters and make a decision by Aug. 25. Blue and White will try to outflank him and propose legislation extending the deadline. A “nay” vote by Netanyahu and the Likud would prove the prime minister is angling for a fourth election. Either way, as Netanyahu’s bitter opponent Yisrael Beitenu leader Avigdor Liberman says, “Nothing good in threatening Benjamin Netanyahu right now.”