Prime Minister Benjamin Netanyahu’s partner and rival Benny Gantz has called his bluff, forcing him to compromise on extending the budget deadline that would have forced new elections. 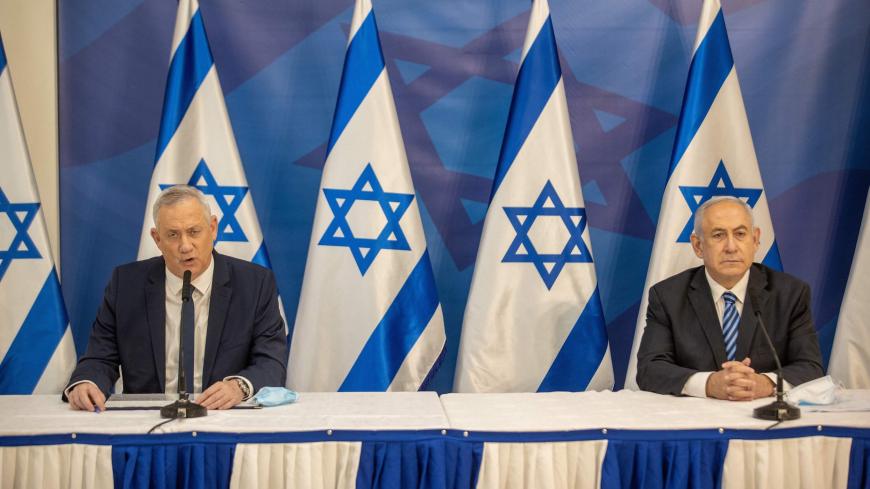 Prime Minister Benjamin Netanyahu and Defense Minister Benny Gantz had until midnight on Aug. 24 to reach a compromise on state budget. Failure to reach one would mean that the Knesset would be dispersed and new elections announced. At last moment, the two partners and rivals indeed reached a compromise, staving off the deadline for another four months.

But the compromise is bad news for the premier. If Gantz takes over from Netanyahu in November 2021 as per their coalition agreement, it would be due to this compromise. Gantz’ prospects of becoming prime minister have just grown.

Netanyahu’s vulnerability to external events, particularly US President Donald Trump’s reelection, has also increased. Netanyahu’s prayers for a Trump victory in November have likely become more fervent since Monday. A possible victory by Democratic contender Joe Biden would leave him dependent on his centrist partners Gantz and Foreign Minister Gabi Ashkenazi to convince Israelis that Israel’s relationship with the next US administration would remain as good as it has been since Trump took office.

The latest crisis of the Netanyahu-Gantz government, which is just over three months old, broke out over Gantz’ refusal to support a 2020 budget, in violation of his deal with Netanyahu that stipulated passage of a two-year budget for 2020-2021. The argument was not really over the budget, considering Israel has not had a parliament-approved budget since the end of 2018. It was about the job switch.

The supposedly ironclad coalition agreement includes a loophole that allows Netanyahu to remain in office even if the government is dismantled and new elections are scheduled: failure to approve the state budget. When the agreement was inked in April, Gantz was certain that a two-year budget was imminent, blocking Netanyahu’s escape from the job rotation arrangement. A political neophyte, Gantz likely did not dream that Netanyahu would immediately renege on the pledge. The move leaves Netanyahu with one exit from a handover to Gantz. All he has to do is refuse to pass a one-year budget in 2021, triggering the automatic disbanding of the Knesset, leaving him in power and dragging Israel into its fourth elections in two years.

But this week, Netanyahu’s rival stood firm and stared him down. Gantz, with Ashkenazi’s encouragement, likely decided he had little to lose. Netanyahu clearly did not intend to make good on the rotation deal in any case, and it was time to confront him.

Gantz announced that he would address the nation at 8 p.m. and kept everyone in the dark about what he planned to say. He and Ashkenazi threw caution to the wind and calling Netanyahu’s bluff. Like the biblical hero Samson, Gantz was willing to bring the temple crashing down on the Philistines and himself.

Netanyahu panicked. His euphoria over the Aug. 13 normalization agreement with the United Arab Emirates notwithstanding, he knew elections are risky. An Aug. 20 Maariv poll gave his party 29 Knesset seats. Another published Aug. 27 showed the trend continuing, with the Likud getting only 28 seats, tying Netanyahu’s his right-wing ultra-Orthodox bloc with that of the center-left.

The worst news for Netanyahu was that right-wing Yamina leader and former Defense Minister Naftali Bennett is surging in the polls and, according to various indications including his own remarks, has apparently decided to seek the premiership himself rather than endorsing Netanyahu like he did after the previous three elections. Bennett likely knows his prospects of victory are slim, but figures he will get sufficient votes to forge new advantageous alignments.

This is where Netanyahu is vulnerable. The 2013 alliance Bennett forged with Yair Lapid, chair of the centrist Yesh Atid, forced Netanyahu to invite them both into his government coalition. If he loses Bennett’s support now, after already losing the backing of Yisrael Beitenu leader Avigdor Liberman, Netanyahu is finished. On Monday evening, just before 8 p.m., Netanyahu recorded a last-minute video announcing that the Likud would vote in favor of a compromise with Blue and White proposed by Knesset member Zvi Hauser delaying the budget approval deadline by 120 days. If Gantz was going to upset the applecart, Netanyahu would have to go along with a compromise.

It was a Pyrrhic victory. All he did was to preserve his escape hatch from the rotation deal with Gantz until the end of December. Gantz, the laid back political rookie Netanyahu has been abusing from the get-go, won. He did not give in to Netanyahu on the issue of senior appointments (Netanyahu wants a say on picking the next police commissioner, state attorney and attorney general, even though he is standing trial on corruption charges), nor did he agree to Netanyahu’s demand for a one-year budget. Right now, Netanyahu and Gantz appear tied, but ultimately, it could turn out to be a major Gantz victory, because according to all indications, Netanyahu’s position four months from now will not improve.

The pandemic shows no signs of abating, the economy does not seem to be recovering and the coming winter could exacerbate both crises. The evidentiary phase of Netanyahu’s criminal trial begins in January, placing him in court for long hours three times a week. Then there are the November US elections. A Trump reelection could considerably improve Netanyahu’s mood and inclination to gamble with the White House solidly behind him. If Biden is elected, Netanyahu will need a miracle. The loss of his White House asset would substantially weaken Netanyahu and leave Gantz and Ashkenazi to preserve the ties between Jerusalem and Washington.

A December election gamble appears riskier to Netanyahu than it would be now, so delaying the crisis could end up crowning Gantz prime minister next year. If Netanyahu gives in and the Knesset approves a two-year budget in December, as expected, the door would slam on his loophole out of the job switch. Under the coalition agreement, if the government falls apart for any reason other than the budget approval, Gantz automatically becomes head of a transitional government until new elections are held. He may be inexperienced and reluctant to engage in political fights, but the former military chief is a lucky underdog who usually gets where he wants to go. Prepare for December.