Netanyahu’s fate to be determined by COVID-19, not corruption trial 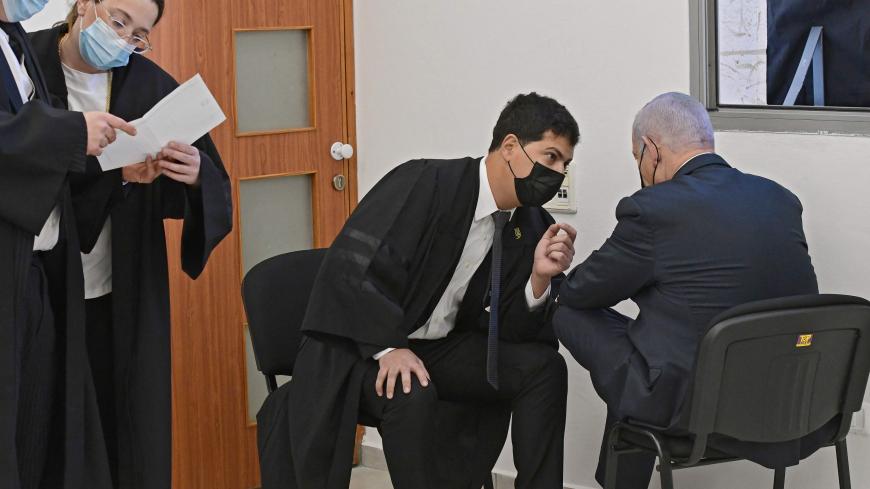 Israeli Prime Minister Benjamin Netanyahu (R) talks with his lawyer ahead of a hearing in his corruption trial at the Jerusalem district court, on Feb. 8, 2021. Netanyahu denied corruption charges against him in a brief court appearance six weeks before Israel's fourth national election inside two years.

On the morning of Feb. 8, cameras followed Prime Minister Benjamin Netanyahu for 20 minutes in Jerusalem District Court. He came for the opening deliberations for the evidence stage in his bribery trial.

Netanyahu arrived exactly on time, escorted by his lawyer and media adviser. When the opening of the session was delayed, Netanyahu could have chosen to wait in a side room. But instead, he chose to remain, visible to all.

Thus, everyone could see Israel’s prime minister confiding in his lawyers on live broadcast. Their faces were covered with masks, making it more difficult to decipher what they were saying or even their body language. Was Netanyahu nervous? Was he tense or anxious? Afterward he sat down on a chair opposite one of his lawyers, with his back to the camera. Near Netanyahu was an open window, from which the voices of the anti-Netanyahu demonstrators outside could be heard. Some were dressed as handcuffed prisoners, hinting at what they hope will be Netanyahu’s fate. They shouted, “Get lost!” to him.

Nothing in this picture was spontaneous. Netanyahu consciously chose to create a moment of pathos where a prime minister who had led a COVID-19 Cabinet meeting until late at night was forced to make an appearance in court like any Joe Blow. And — as Netanyahu hoped — his was the photo that starred in all the news reports, and appeared the next day on newspaper front pages, not only in Israel but around the world.

For those Israelis who see Netanyahu as corrupt and dangerous, this photo reflected the depth of the prime minister’s entanglement, another low point on his way out. But for his admirers and supporters, it held a different meaning and was an expression of his persecution by left-wing politicians and the media. Netanyahu directed himself at his supporters; he needs their votes in the upcoming March elections. He must preserve the glue that connects them to him; he is the only one who holds the magic formula, as everyone has seen in the last two years.

Netanyahu is the first Israeli prime minister accused of serious offenses of bribery while in office. Over three election campaigns, his opponents have used this fact to bash and castigate him. Many people were convinced that simply pressing charges against him would bring him down, but the fact is that Netanyahu is still prime minister and still has a decent chance of being reelected again, despite everything.

The conclusion is that the corruption campaign against him is not really working; Netanyahu easily convinces those who are already convinced. In fact, Netanyahu proved that the charges against him actually have had positive electoral value. He succeeded in creating an identity that he shares with his supporters: When others “persecute” the prime minister, they are persecuting his supporters as well and trying to topple the right wing from the government.

This is the reason that none of Netanyahu’s major opponents stormed the studio gates Feb. 8 in a major “Netanyahu is corrupt” campaign. Instead, they just sent the usual messages. They understood that their campaign was not bringing them voters, but only helping Netanyahu unite the right-wing camp.

Count the differences: When Netanyahu made a court appearance in May 2020, he was accompanied by high-ranking, mask-covered Likud members who were backdrops to the prime minister’s “J’accuse” speech against the prosecutor's office. This time, he chose a more laid-back strategy. The day before, he disseminated a video in which he told his supporters not to make an appearance at the court due to the social-distancing directives of COVID-19. Netanyahu himself was on time (as mentioned above), treated the judges in the hall respectfully and left court only when they gave him permission.

He continued from there to a meeting with Greek Prime Minister Kyriakos Mitsotakis, who arrived for an official visit in Israel. This, too, was not coincidence: Netanyahu wanted to send out business-as-usual signals to show that even though he was busy with his trial, he also was succeeding in fulfilling his role as prime minister.

Netanyahu did take advantage of his press conference with Mitsotakis to argue that the charges against him were trumped up.

“I think everyone knows that I was framed in the cases against me, but today it turned out that the work that was done in trying to frame me wasn't even good,’’ he said. Netanyahu guessed that his trial would not resume before the elections, saying, “It doesn't seem to me that they will rush to the evidentiary stage before the elections. In any case, it will be perceived even if this isn't the intention, it will be perceived as blatant interference in the elections.”

Well-informed jurists agree with this assessment: that the stage of proof, when the prosecutor's office sends its important witnesses to testify, will not accompany the election campaign.

Is that good or bad for Netanyahu? Whom does it help? As aforementioned, Netanyahu’s court case and the associated corruption cases never became factors to Netanyahu’s detriment, at any stage. Netanyahu succeeds in retaining his status as leader of the right who heads the largest party, the Likud. The Likud never deposed him and those in the Likud who wanted to depose him, such as former minister Gideon Saar, left on their own and founded a competing party.

Thus, it seems that the only thing that will determine the election results is COVID-19. Netanyahu was convinced that morbidity in Israel would drop by this month, due to the successful vaccination project, and that life would return to normal. But the virus proved its cunning once again: Despite the third closure and the vaccinations, morbidity in Israel has not dropped significantly. The hospitals are full of seriously ill COVID-19 patients, and their ages are dropping.

It’s almost a year into COVID-19 and we still don’t see the light at the end of the tunnel; the Israeli public is worn out after a rocky year of lockdowns, illness and loss of livelihoods. True, Israel isn’t the only country in the world coping with COVID-19. But it is the only state whose prime minister is facing a trial; that leaves Israel open to political blackmail on the part of the country’s ultra-Orthodox elements, who are defiantly rebelling against the coronavirus lockdown rules.

If Netanyahu does depart the Israeli stage as a result of the upcoming elections, it will only be due to COVID-19 – and not the court case against him.